Home » Bones TV Review Season 11 The Head in the Abutment

The hockey skates on the star 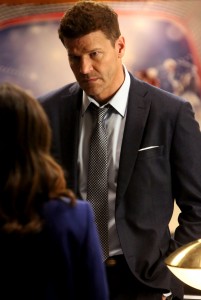 There are a number of subplots in the BONES Season 11 episode “The Head in the Abutment.” However, the principal reason for the storyline seems to be justifying getting Agent Seeley Booth, played by David Boreanaz, out on the ice wielding a hockey stick. As most people with even a passing knowledge of BONES behind the scenes lore are aware, actor/producer Boreanaz played hockey back in the day and remains a major fan of the sport.

Gene Hong’s script for “The Head in the Abutment” gives the Jeffersonian team a headless body pulled from the Anacostia River. A YouTube video shows a couple of idiots out on the water who accidentally decapitate the floating corpse with their boat propeller.

Booth is able to i.d. the body as star hockey player Seth Lange. The team he’s currently playing for is coached by Jeremy Roenick (played by real-life former hockey star Roenick), who’s working with his players when Booth and partney Aubrey (John Boyd) show up to investigate. Booth skates up to talk to Roenick.

Back at the lab, Hodgins (TJ Thyne) gets angry when he feels that Dr. Oliver Wells (Brian Klugman) has cheated at the videogame Aerial Attack. Hodgins designs a drone based on the weapons in the game. Hodgins’ drone has a much more practical purpose – to seek out and retrieve (with its claw) Lange’s missing head. It turns out that Hodgins has made two drones, so that he and Oliver can have a rematch. Hodgins wins, but fails to consider the implications of flying the severed head over civilians. Aubrey heads to the lab. He’s meant to give the two self-described science nerds a stern talking-to, but he thinks the drones are awesome. Aubrey is also much better at Aerial Attack than either of the lab guys.

With the head, Brennan (Emily Deschanel) and the Jeffersonian team can now determine that Lange was hit with a hockey stick. Booth knows that pro hockey players have custom-made sticks, so it’s easy to find the weapon.

The culprit is one of Lange’s fellow players, whose pregnant girlfriend was selling illegal painkillers to the team. Lange objected to her dealing and was going to blow the whistle.

During the investigation, Booth comes across Darryl Patterson (Colby French), a goalie he defeated in high school. Darryl has gotten quite hung up on the game. Booth realizes that the loss has shadowed Darryl’s entire life and replays the shot on the ice with the other man. Booth lets Darryl win, which Brennan admires.

In a minor subplot, Brennan and Booth are trying to do some spring cleaning, but Booth doesn’t want to part with his collection of socks, while Brennan is unwilling to pare down her library.

It’s fun to see Booth/Boreanaz on the ice; he acquits himself well. As a character note, it’s also good that Booth easily displays compassion and good sportsmanship. The drone with the severed head is a strong sight gag, and the trash talk between Hodgins and Oliver is amusing. The bickering between Brennan and Booth over what should stay and what should go seems intended as amusing, but doesn’t play that way.