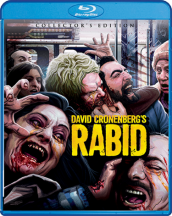 David Cronenberg’s second film reveals his early fascination with body horror but lacking some of his latter style and, yes, restraint 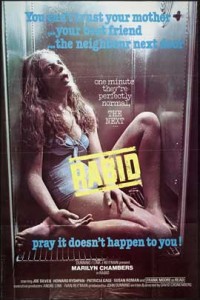 While David Cronenberg’s first two films 1975’s SHIVERS (aka THEY CAME FROM WITHIN) and 1977’s RABID showcased his early fascination with body horror and subverting the traditional horror genre, it wasn’t until 1979’s THE BROOD where his ideas and filmmaking skills really began to gel in a cohesive fashion, improving by leaps and bounds with his each subsequent film.

However, there’s tons to admire with both SHIVERS and RABID, and now, thanks to Shout! Factory, we finally get an excellent RABID reissue featuring a brand new 2K scan from the original negative. It restores RABID to a much more polished form, which, in most home video incarnations never looked as sharp as it should.

Then again, RABID is a low budget movie, so some of those rough edges can never truly be sanded off with a 2K scan, but at least the movie has been restored to a point where it’s never looked better.

RABID stars former 1970s porn star Marilyn Chambers as Rose. After being involved in a horrible motorcycle accident with her boyfriend Hard (Frank Moore). While he’s taken to a normal hospital, she’s taken to a newfound clinic where she’s given a revolutionary skin graft, taking skin from her thighs and transplanting it onto the upper half of her body in hopes of growing new skin. This being a Cronenberg film, the operation proves to be problematic when the skin graft creates a hybrid vagina/phallus in her arm put. When she gets turned on, the phallus emerges and stings its victim, sucking their blood and turning them rabid within hours.

Both an alleogrical vampire film and zombie movie rolled up into one, Cronenberg treads lightly to not be one film or another. Instead, like his best work, it’s a little more heady and cerebral. It also features some great, taut suspense sequences as well as outright disgusting body horror moments that Cronenberg is known for.

Where RABID is most effective is in the outbreak scenes. Instead of the film turning into a traditional zombie-film, the outbreak is more realistic and unsettling. And at its core is Rose trying to figure out what’s going on and then being horrified when she learns she’s responsible for the outbreak.

RABID is quite bleak, but it showcases a young filmmaker grappling with themes that continued to fascinate him throughout his career and finding ways of making them palatable for mainstream audiences.

Chambers, certainly gave the film some extra marketing hooks in its era and she’s pretty good, faring better when she’s embraced her dark side. Oddly enough, Cronenberg wanted a different actress for the role – a young Sissy Spacek who was just a year away from her breakout role in CARRIE, while the producers pushed for Chambers. It makes sense, because Chambers crossing over to a mainstream film I still one of the things people talk about, this review included, when talking about RABID.

While it would have been nice to have a new interview with Cronenberg on this set, in the supplemental material we do get an archival interview with him and an older commentary track. There’s also a great featurette showcasing Cronenebrg’s work from SHIVERS to VIDEODROME.

With zombie films and TV shows all the rage, it’s great to see a young Cronenberg play with the genre (especially since his first film SHIVERS also had similar attributes). I still feel 1981’s SCANNERS and 1982’s VIDEODROME showed him hitting his stride with this subgenre before entering the studio world with the exceptional THE DEAD ZONE and THE FLY. He still stands as one of the more fascinating and original horror directors to come out of the 1970s/1980s. His movies hold perverse pleasures and strange visuals that haven’t been matched since. And while other filmmakers try to ape his unique style, no one has ever come close enough to supplant him as the master of this subgenre domain.

RABID is worth adding to your collection and with Shout! also releasing DEAD RINGERS, his 1988 follow-up of THE FLY at the same time, it’s a great double feature (especially since DEAD RINGERS was something he was toying with around the time of RABID).