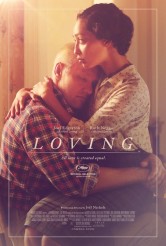 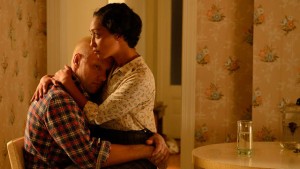 When we first meet Mildred Jeter (Ruth Negga) and Richard Loving (Joel Edgerton), they seem like two people very unlikely to make history. Richard is a bricklayer; Mildred’s family works in the fields. When Mildred tells Richard she’s pregnant, he’s overjoyed. He buys a parcel of land where he intends to build Mildred a house, then proposes to her. It’s Mildred’s turn to be overjoyed.

The problem is that we’re in 1958 Virginia where, like many other Southern states at that time, it’s illegal for people of different races to get married. Mildred is black; Richard is white. They leave the state to get married in Washington, D.C., then come home. Richard believes that so long as they mind their own business and don’t bother anyone, no one will bother them. Then the local sheriff’s deputies barge into the house in the middle of the night, grab Richard and the pregnant Mildred, and throw them both in jail for breaking the law. When they come up before the judge, their options are prison time, divorce, or leaving the state.

If writer/director Jeff Nichols wanted to do something with more conventional beats, the active fight against injustice might begin there. Instead, the Lovings reluctantly move to Washington, D.C. It’s not until years (and three kids) later, when Mildred strongly feels the tug of homesickness, that she takes a minor first step. This attracts the attention of the American Civil Liberties Union.

We do see a bit of the Supreme Court case, but the focus of LOVING remains Mildred and Richard. They’re not looking for the excitement of public attention, they really just want to live their lives. We’re almost always with Mildred and/or Richard, seeing things from their points of view. The sense of mounting outrage doesn’t come from moral hypotheticals, but from the fact that these people are constantly being interfered with, obstructed and terrorized for no other reason than that they’ve made a life together.

Nick Kroll and Jon Bass play the ACLU lawyers who take the case to the Supreme Court. They are depicted as being so enamored of the historical possibilities that they are somewhat insensitive to their clients. This antiheroic depiction isn’t unkind; it in fact seems more credible than something more glowing would and takes any sting of preachiness out of the proceedings. People can fight the good fight and still want some glory for it.

The performances are extraordinary. Negga’s enormous eyes reflect every nuance of hope, hurt and resolve even when she’s being very still. Edgerton’s Richard is a private man of tightly held emotions. When it seems, late in the film, that Richard might break, we fear for him, because Edgerton has made him so sturdy and so real that it seems like it’s happening to someone we know.

LOVING takes it for granted that the law came out on the right side. It is all about its main characters, and it has a lived-in quality, a sense of being there with them that stays with you a long time after the film ends.