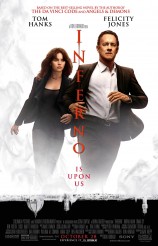 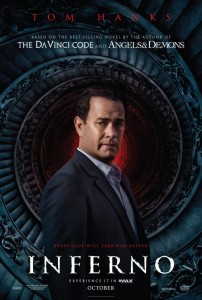 With INFERNO, star Tom Hanks and director Ron Howard are back for their third go-round with historian Robert Langdon, hero of 2006’s THE DA VINCI CODE and 2009’s ANGELS & DEMONS. All three films are adapted from Dan Brown’s novels.

In quality, the film INFERNO sits somewhere between its two predecessors. Neither as much fun as DA VINCI CODE nor as completely silly as ANGELS & DEMONS, INFERNO is one of those big Hollywood movies where you have to accept its conventions or you won’t have a good time. There are plot twists and puzzles, but no surprises in style.

Langdon (Hanks) wakes up in an Italian hospital room with a bullet graze on his head and no memory of the last several days. When someone tries to shoot through the door, attending physician Sienna Brooks (Felicity Jones) helps Langdon flee. Subsequently, Langdon and Brooks try to figure out what is going on, what it is that Langdon can’t remember, who is chasing him and what it all may or may not have to do with Langdon’s hallucinations.

Anyone who has seen the trailer will know that the fate of the human species is at stake. How and why this is happening makes much more sense than exactly how Langdon puts the puzzle pieces together. For one thing, Langdon’s hallucinations are so on the nose that, for awhile, it seems as though INFERNO may be slightly switching genres from its predecessors and switching from thriller to supernatural, but this isn’t the case. It’s understandable from one angle that the filmmakers wanted to get some shocking imagery into the movie, but it’s also something of a cheat.

Unlike the other two films in the series, INFERNO doesn’t involve the Catholic Church, except to the extent that the writings of Dante are based on religious concepts. Another departure is that Langdon is working on clues left more recently and deliberately than those he has investigated before. The more we learn about this, the more we have to either suspend disbelief or give up altogether.

This said, there are some very interesting notions about the state of the world and moral obligation put forth in David Koepp’s script. Hanks is as sincere and humane as any viewer could wish, and Jones radiates intelligence. The film is just about stolen by Irrfan Khan, whose character is perhaps the most original element here. Ben Foster also stands out as a secretive billionaire.

Director Howard establishes a great breakneck pace that is sustained pretty much throughout. He also, as usual, does a lovely job of showing us Italy and other international locations as the characters race around and through them.

INFERNO is a kind of cinematic comfort food. It offers the familiar, reliable Hanks in a familiar, reliable formula. It even has some good surprises. It doesn’t have a solid structure, though, and this becomes more troublesome as the film progresses.