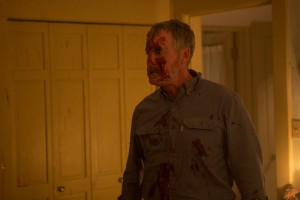 John C. McGinley is back on series television, playing one half of the title in IFC’s new Thursday-night horror comedy STAN AGAINST EVIL, created by Dana Gould. Stan is a just-fired small-town sheriff who wants to get rid of the demons and dead witches plaguing the place so that he can get back to being grouchy in his own home.

McGinley, a native New Yorker, has an extensive Broadway career and a huge film resume that began with SWEET LIBERTY and PLATOON. On TV, he played Dr. Perry Cox for nine years on NBC’s SCRUBS. More recently, McGinley starred in two seasons of the half-hour GROUND FLOOR.

ASSIGNMENT X: Did you do anything in between the end of GROUND FLOOR and the start of STAN AGAINST EVIL?

JOHN C. McGINLEY: I did three independent films, one in New York City, one in Bogota, and then one in Bloomington. And it chased me back to television.

AX: That’s a lot of work and travel …

McGINLEY: It’s such a leap of faith and a role of the dice when you do these one-, two-, three-, four-million-dollar films. You don’t make any fewer sacrifices, or apply yourself less assiduously than you would if you were doing GLENGARRY [GLEN ROSS] on Broadway with Pacino [which McGinley did]. It’s still the same intense focus and intense preparation, and you’re hiring your people, your acting coach, to come out, and you have your two months of preparation before. And the thing may never see the light of day.

AX: With a television show, you know it will be seen, and you’re in one place for awhile, and you have a little more time to develop your character … 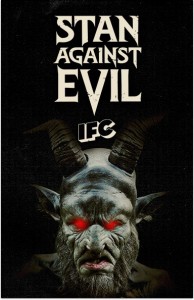 AX: Were you looking to play an action hero, albeit an unconventional one? Was that part of the appeal?

McGINLEY: No, the appeal to me was the sensibility of Sterling Hayden meets Carroll O’Connor.

AX: You mean Sterling Hayden as he was in DR. STRANGELOVE, or …?

McGINLEY: Yes. Buck Turgidson. One hundred percent. It’s not Sterling Hayden in GODFATHER. It’s with Kubrick. He’s one of my heroes. And Dana was pounding the table about Carroll O’Connor, who I’d worshipped. And all of a sudden, you get on the same frequency as somebody, like I was lucky enough to with Billy Lawrence on SCRUBS, and you can’t fake that. You guys are either simpatico or you’re not. And hopefully you’re going to be working together for five or six years – SCRUBS was nine years – and that yields huge dividends. Instead of us battling the whole time.

AX: Was horror a genre you were interested in before this?

AX: Does Stan quickly come to an opinion on the witches, like, “They are the bad guys and we are the good guys,” or …?

McGINLEY: No. What compels him more than that is his honest-to-God need to get back in his Lazy Boy recliner. And if it takes knocking these people [demons and resurrected witches] out with a pipe to get back into my recliner, now that I’m retired, my wife is dead after twenty-seven years together, then we’ll go and we’ll knock them out with a pipe, if that’s what it takes. I’m going to get back to my recliner. And whatever these things are, he’s equipped to be able to participate in this resolution.

McGINLEY: Yes. And I wanted to layer in the loss of his wife Claire as something that also interferes with his ability to participate in a resolution-directed objective, since he hasn’t resolved his own issues yet. I had a lot of success with Dr. Cox, because he was this layered, damaged character. Writers can write damages. Most leading men, sooner or later, when they get the girl, they get a little boring. So I find that when you can supply the writers with damages, you reduce the risk of redundancy. And I think a lot of actors get bored, and audiences get bored, when all of a sudden, you’re a cavalcade of redundancies.

AX: It sounds like Stan would have quite a way to go before we hit redundancy.

AX: It sounds like there’s a lot of splatter in STAN AGAINST EVIL. Have you dealt with this much goop before in your career?

McGINLEY: Maybe in PLATOON. There was a lot of blood and goo and getting hit by fake bullets. And maybe in THE ROCK, too – THE ROCK was pretty bloody. But certainly not in SCRUBS. Nothing kills a joke quicker in a medical comedy than actually seeing surgery [laughs], so we really didn’t have any surgeries in SCRUBS. I would say just THE ROCK and PLATOON.

AX: Do you like dealing with splatter? Is it fun having something that you can’t help but react to, or is it like, “Oh, boy, we’ve got to clean it off and go again”?

McGINLEY: It’s an interesting question, because when you put actors in extreme circumstances, whether it’s freezing cold, at night, with rain, or out in the snow at four in the morning, or splatter coming at you, actors stop acting and they start to just behave. And so that great stutter that they came up with, and that great limp that they were going to give the character, those all tend to dissipate [laughs] because they’re freezing, they can’t call their lawyers or their managers at four in the morning, because we’re out in the desert, and it’s thirty below, and all of a sudden, they just behave. And I love actors. But it’s just great when you put actors in extreme circumstances. Not so they’re in jeopardy, but just – they have splatter. They have forty pounds of liquid coming out in that one action, and you have to not blink before it hits you. “Action.” You won’t act – you’ll behave. I think it’s great. Look, I think the camera is an x-ray machine, and it sees through most of the lies actors try to tell. And so when you stop trying to tell lies and start telling your truth, the camera makes love to the truth.

AX: Do you and STAN creator Dana Gould collaborate a lot on what Stan is like?

McGINLEY: Yes. And I think he was written sixty-five, seventy, so fifteen years older than me. And the first makeup test, I went to Santa Monica, and there were all these people with appliances they were going to put in my eyes, and I was like, “Everybody, stop. Stop, stop, stop, stop. I’m Stan. I’m fifty-six. We can age him up with that grayish beard two or three years. We’ll make up fifty-eight. But stop with all this. Now I’m Stan.” Not on the page – he was sixty-six, sixty-seven. I’m like, “Stop.” And I wasn’t being a noodge. I was just like, “Here’s the reality. It’s Johnny C. McGinley. Let’s start with that. And I can make him damaged, and I can make his body hurt, and we’ll grow in some whitish beard. Stan’s here now.”

AX: Did they have to change why Stan was no longer the sheriff? Because presumably in the original version, he’d aged out, whereas he wouldn’t have necessarily aged out at fifty-six …

McGINLEY: No, the reason he’s not a sheriff any more is because of the shenanigans at the funeral. The first time we see Stan, the cold open, he beats the s*** out of a witch at the funeral, who at first is a woman, who we see metamorphose into a witch. And he’s not amused. So he beats the hell out of this witch. And he’s fired, because everybody else sees her as a woman, but she’s not. She’s a witch named Stella Stannis, who we’ll now find out about over the next half hour. But his age has nothing to do with it. He’s fired for conduct unbecoming.

AX: Did you bring anything else to the creation of Stan, apart from going, “We’re not going with appliances, this is him”?

McGINLEY: I brought the reality of a guy whose wife is gone after twenty-seven years.

AX: And how is it working with Janet Varney, who plays the new sheriff?

McGINLEY: It’s like working with a reluctant action hero. She’s going to be the most dynamic female protagonist on TV. She’s a really good athlete, her improv background makes her completely facile, and she can adapt to anything which maybe we change on the fly, which we did a lot, and that’s really remarkable. She reminds me of [SCRUBS actress] Sarah Chalke in a lot of ways, who is one of my favorite people on the planet, and that she’s just evil. Anything we want to do, she’s evil. That’s an amazing thing to say about someone.

AX: Where are you shooting STAN AGAINST EVIL?

McGINLEY: We shot every frame of it in Atlanta.

AX: Once STAN was up and on its feet, were you still going in and brainstorming with Dana Gould?

McGINLEY: I had a post-production company in New York called River One for fifteen years in the Brill Building. So I’m very comfortable in post, and I’m now functioning as a producer in post and helping with the cuts and trying to sweeten this, and maybe take in a little off there and seeing how we can best construct twenty-one minutes and thirty seconds.

McGINLEY: Just the independents. James Gunn, the guy who did GUARDIANS OF THE GALAXY, had one in his back pocket called THE BELKO EXPERIMENT. Tony Goldwyn and a bunch of us went down to Bogota and we shot that a year ago. And then I went and I shot this amazing film in Bloomington called THE GOOD CATHOLIC with Danny Glover, and then I went to Nashville, Tennessee, and I did one called ROUNDING THIRD, a comedy about a Little League baseball coach.

AX: And what would you most like people to know about STAN AGAINST EVIL?

McGINLEY: That it’s the funniest scary TV show on TV.

This interview was conducted during IFC’s portion of the 2016 summer Television Critics Association press tour at the Beverly Hilton Hotel.