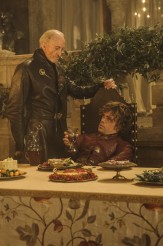 An engrossing episode with no extraneous scenes 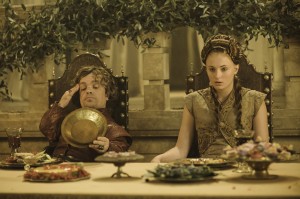 GAME OF THRONES always seems purposeful overall, but “Second Sons” is an especially good episode, with no discernible “meanwhile back at the castle” scenes.

The big event here is the wedding of Tyrion Lannister (Peter Dinklage) and Sansa Stark (Sophie Turner), and it’s a toss-up as to which one is unhappier about it. Tyrion’s nephew, King Joffrey (Jack Gleeson), ever helpful, first removes the stool Tyrion needs to be able to reach Sansa’s shoulders to garb her in the traditional wedding cloak (Sansa winds up kneeling), then takes Sansa aside and threatens to rape her. When Joffrey proceeds to harass Sansa at the reception, Tyrion threatens to castrate his nephew. Lord Tywin (Charles Dance) intervenes, preventing violence. Despite Tywin’s command to Tyrion to get Sansa with child at once, Tyrion tells Sansa he won’t be in bed with her until she wants him there. Sansa asks, “What if I never want you to?” Poor Tyrion. Tyrion’s secret lover Shae (Sibel Kekilli), who is also Sansa’s maid – again, poor Tyrion – is surprised to see by the lack of blood on the bed sheets that Tyrion has indeed refrained from consummating the marriage.

Arya (Maisie Williams), who believes she is a prisoner of the dread Sandor Clegane (Rory McCann), is surprised to find that he’s taking her to her mother and brother, who will be attending her uncle Edmure’s wedding to one of Walder Frey’s daughters.

Daenerys (Emilia Clarke) tries to enlist a band of mercenaries called the Second Sons in her planned war against the Yunkai. Since the Second Sons are already pledged to the Yunkai, two of the captains decide to kill Daenerys and end the war before it begins. A third captain, Daario Naharis (Ed Skrein), is selected to kill Daenerys, but when he walks into Daenerys’ bath, he’s carrying the severed heads of his erstwhile companions as a show of good faith to the Khaleesi. Daario declares that he fights for beauty – clearly, he’s chosen the right side by his own lights.

Melisandre (Carine Van Houten) has Gendry (Joe Dempsie) at Stannis Baratheon’s (Stephen Dillane) stronghold. Stannis wonders why Melisandre doesn’t just sacrifice Gendry and be done with it, but Melisandre makes a speech about not frightening lambs before they’re slaughtered. This doesn’t seem to make much sense, given that she then proceeds to terrify the heck out of Gendry, first bedding him, then tying him up and putting leeches all over him (including a place no man wants anything painful). Melisandre then throws the leeches in the fire, uttering the names of the three men Stannis considers his rivals for the Iron Throne – Robb Stark, Joffrey Baratheon, Balon Greyjoy.

Beyond the Wall, Sam (John Bradley) is looking after Gilly (Hannah Murray) and her baby boy. They exchange stories of paternal cruelty – we know Sam’s father threatened to kill him if he didn’t join the Night’s Watch and of course Gilly’s father raped her and her sisters. Sam goes outside to have a look around and is attacked by a White Walker. The Walker knocks away Sam’s sword, but Sam uses his dragon-glass dagger and, to his amazement, kills the Walker.

Turns out things really are different beyond the Wall, as Sam tells Gilly, “I’ll be right back” and actually comes back, despite being involved in the most horror-story-like part of the tale. Bradley is endearing as Sam and it’s enjoyable to see him having his own adventures out from the shadow of Jon Snow.

Liam Cunningham as the honest to a fault Davos Seaworth is another under-credited hero among the cast and characters. The actor radiates dogged integrity, whether he’s standing up to Stannis or just looking around trying to figure out how a situation may be salvaged.

Turner, Gleeson and (as always especially) Dinklage are particularly splendid in the sub-game of matrimonial and familiar terrorization and capitulation, as Tyrion feels honor-bound to defend helpless Sansa, Joffrey delights in insulting his uncle and new aunt, and Sansa doesn’t know what to trust. The nuance all three performers put into what they’re doing invites repeat viewing just to let each layer register.

It is all gorgeous and engrossing and leaves us ravenous to see what comes next. All hail GAME OF THRONES and its brilliant makers.