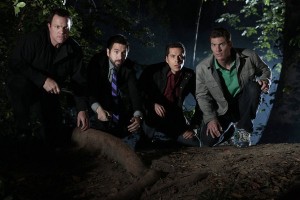 To mark the end of CHUCK’s five-year run, NBC hosted a conference call on Monday with Adam Baldwin, who has starred on the series as experienced espionage agent John Casey, one of Chuck’s handlers, and Chris Fedak, who created the series with fellow executive producer Josh Schwartz.

Here are some highlights of that conversation.

On what can be said about the big finale, Fedak says, “It’s going to be different from anything we’ve ever done and the biggest thing we’ve ever done on the CHUCK show. We knew that we were building toward one final episode, and we really wanted to put together something special. It’s going to be a two-part finale. The first part of it is called ‘Chuck Vs. Sarah’ and the second part’s called ‘Chuck Vs. the Goodbye.’ Everything is at stake. All of our characters are at a crossroads.”

At the end, will the characters and/or actors break the fourth wall and address the audience directly? Fedak sounds horrified by the question. “Oh, God, no. This guy’s got a computer in his head, so to continue to keep that believable, you can’t have him just stare at the question and talk to the audience. That would be outrageous.”

Previously, the CHUCK writers had to craft the season finales to double as series finales, in case the show wasn’t renewed. On writing the actual final episode, Fedak says, “All the [season] finales that we’ve built before, we were hoping to come back. And so we wrote them in such a way that they implied a big new season coming next year. This time, we knew this was going to be our final episode. When NBC picked us up, it was very clear that this was going to be a thirteen-episode run and that this would be our final season. So when we were writing it, it was much more like this will be the final chapter. This will be the final moment of the show and we need to resolve these stories that we’ve been working on for five seasons now.” 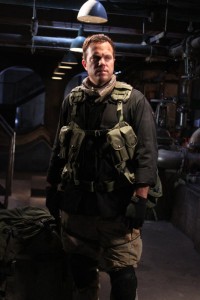 In terms of preparing for the CHUCK finale, Fedak says “the writing of it was a panic attack on a daily basis.”

“There were days when it was hard to even look at the board in the writers room and then to consider the page,” says Fedak. “But when we finally cracked the story, it was a big moment and there was a lot of emotion involved in a process that’s usually pretty solitary, but hopefully I’m not in too much of a mess getting out of it. In regard to the very final moment of this season, it was something that we came up with at the end of last season, and it was part of our pitch to NBC for bringing us back. This year we knew we were heading toward this final moment of the show, and so that was a year in the making.”

On the challenge of playing Casey, who must always be credibly badass but also endearing, Baldwin says, “There’s some resolution there [in the finale] with his relationships, which I found very heartwarming and dangerous at the same time. That was the thing about Casey. The biggest challenge for Chris and the writers was to keep him dangerous, while at the same time lovable, and I think they walked that fine line. It was nice to get the personal aspects of his life highlighted in the last couple of seasons, so I really appreciate it. I thought that was fun.

“I learned awhile ago to always play the positive,”Baldwin adds, “and with a grunt, you can get away with a lot of different nuances. It’s funny to see it written on the page, ‘Casey grunts or growls.’”

Fedak notes, “What’s funny is, there are a number of different grunts and growls that Adam does, but we would never dare to make that choice for him.”

Speaking on Baldwin’s performance overall, Fedak says, “It was a real revelation for us to watch not only what Adam did with Josh Gomez [who plays Chuck’s best friend Morgan] but also what he did with Mekenna Melvin [who plays Casey’s daughter Alex]. The more we saw of what our actors were going to do between each other and the building up of the family part of the story, [the more] we wanted to see. There’s a moment in the finale where Casey is holding a sniper rifle. Adam’s so fantastic. Very few people can look through a sniper rifle [scope] and also deliver something really heartbreaking. It’s really a testament to what Adam has brought to the character.”

On whether there was anything either of them wanted to do on CHUCK that they never got to do, Fedak says, “If we had ended at the end of Season One, there were certainly things that I wanted to do. But we’ve really gotten to do a lot of it. In our final episode, we have an amazing skydiving sequence that we shot using a real skydiver. We always wanted to do that. That was something we always wanted to do. But ninety-one episodes really gave me the opportunity to write a bunch of different kinds of things. The most important thing to me was that we were able to do a lot of the character stuff that we had planned to do with the Chuck/Sarah [played by Yvonne Strahovski] relationship.”

He adds if there hadn’t been time to work on the relationship between Casey and his daughter Alex, “That would have been really disappointing to me. I’m excited that we were able to do all the big emotional stuff that we wanted to do.”

“Just fantasizing here,” Baldwin teases, “but if we had gotten the back nine and gone on to one hundred episodes, would Morgan and Alex have had a kid and would that have then made me Grandpa Casey? Because if that’s the case, I would prefer that you just kill me.”

Were there any plot developments that happened that either of them wish had not been done?

“It’s a one-word answer,”Baldwin replies. “Yes. I’m just going to put ellipses on the end of that and walk away.” 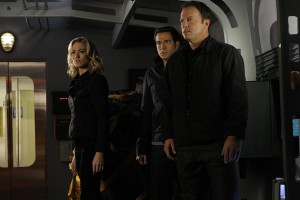 On being on a series that has lasted five years, as opposed to having untimely canceled runs – like, say, Baldwin’s turn as Jayne on FIREFLY – the actor says, “A five-year run on any show these days is a true blessing. [So is] to have been able to go through it with people who are nice and creative and funny and hardworking and just lovable. We’re gypsies, really, in this business. We’re circus players and we travel from town to town and we travel from family to family on different projects. So to land on one for five years is a joy and it’s sad to see it go. But at least we have those five years together and we appreciated it while it was happening. So I just feel blessed and honored to have been a part of it.”

Fedak adds, “This was a lot of fun to make, but it was also an incredible challenge, especially in the amount of time we have. To do something that challenging with such a great team is fantastic. It’s really one you’re going to measure the rest of your career against.”

How was it working on a series that, from year to year, was always in danger of cancellation?

“I think we would have loved a giant successful blockbuster show,” Fedak says. “If we had a giant rating and it was always obvious that we were going to be coming back for another season, it could have been easier for us. There are benefits to that we were never allowed to enjoy in terms of how the show worked. I think the benefit of being on the bubble is that we told a lot of story. We never held [back] anything, we were always ready to throw the kitchen sink into the story, because we didn’t know if we were coming back for another season.”

Will Baldwin miss playing Casey? “I think it’s fair to say that while I will miss Casey,”Baldwin replies, “he was a fully-developed character that got five whole seasons and ninety-one episodes to arc through. So while I will miss it, I won’t miss it as other characters that have been short-circuited where I would have liked to explore [them] further. So it’s a kind of apples and oranges comparison, yes and no.”

What do Fedak and Baldwin think people loved so much about their show? 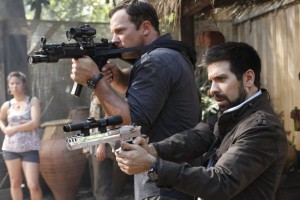 “I think the CHUCK show spoke to people,” Fedak answers. “I think it’s about an Everyman who steps up to the plate and decides to be a hero, but still remained a good guy, still remained the Chuck Bartowski that people fell in love with in Season One. And I think the other thing about the show is that it’s about a family. It’s about a group of people who came together and grow into a family unit. All of my favorite TV shows growing up were kind of about that, and I just can’t imagine a better family than this group, from Casey to Chuck to Morgan to Sarah, to everyone involved in it. I think it was a lot of things for people to lock onto and fall in love with.”

“Let me jump in that,” Baldwin interjects. “My manager said to me at the very beginning, ‘Look, the show’s called CHUCK. If they fall in love with the guy playing Chuck, you’ll continue.’ And they did. That’s one of the reasons why Zach Levi is such a great guy, is that he was able to capture that audience and make them fall in love with him hard enough to stick around. This is my ‘I love Zach Levi’ speech, in case you didn’t know.”

Fedak adds, “That’s an amazing skill set – to be able to be funny, but also mature into the hero of the show. That’s a tightrope that only a few guys can walk, and Zach’s one of them.”

On what things were like the last day of filming CHUCK,Baldwin says, “There were a lot of tears, a lot of emotion. I didn’t cry, but I watched a lot of younger people cry, being the cold-hearted bastard that I am. It was uplifting and bittersweet, because we had against all odds persevered and been lucky enough and had the good graces of the network and the sponsors to keep us going. The sense on the set was, we made it five years when we didn’t even think we were going to make it past the first season. So while there were a lot of tears, they were tears of accomplishment and a job well done.”

“I agree with everything Adam says,” Fedak concurs, “and I will just say the tears were a real disaster. There were people crying for everything. People would type into a computer, and it would be the last time they were typing into a computer, and they’d start crying. So it was an emotional shoot. Thankfully we had the rock that is Adam Baldwin, who doesn’t have emotions, and we were able to do some scenes without crying.”