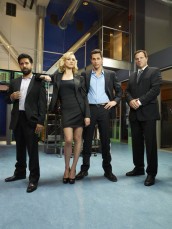 Sarah's lost her memory, but has Chuck lost her? Seriously?

[Editor’s Note: Since the two-hour season finale of CHUCK is essentially two separate episodes strung together, AX decided it was best to review them individually]

After seeing CHUCK‘s penultimate episode, about the only thing that kept me from running over to Warner Bros. and slapping around Chuck creators Josh Schwartz and Chris Fedak was that I knew a second hour would start immediately after this one. Because spoiler alert – “Vs. Sarah” ends on the worst possible of all cliffhangers and if this weren’t the first hour of the two-part series finale of CHUCK, I would be slapping me some producers.

Not that we weren’t left hanging by last week’s episode, with the evil baddy Nicholas Quinn (Angus Macfadyen) pushing buggy Intersect-infected Sarah (Yvonne Strahovski) into flashing her memories into oblivion and Sarah waking up in the same apartment bedroom where we first saw her in the premiere. And there’s Nicholas at the door telling her she’s his handler and that her new mission is to kill Chuck Bartowski (Zachary Levi).

And that’s where this episode starts, only Nicholas further explains that they need the Intersect glasses and that Chuck is really manipulative and far more dangerous than he appears. Meanwhile Chuck is back home, figuring that what he, Casey (Adam Baldwin) and Morgan (Joshua Gomez) need to do is go to DARPA, the Defense Advanced Research Projects Agency, and retrieve the Intersect and destroy it. Casey and Morgan agree, but before they can go anywhere, a beaten up Sarah is on the doorstep.

Flash back to the hotel room, Sarah is kicking the snot out of Quinn and throws him out the window. Back to the house, Devon (Ryan McPartlin) and Ellie (Sarah Lancaster) are patching Sarah up (check for the bandage on her left shoulder – the injury oddly disappears). But then as Ellie hugs Sarah, we hear Quinn’s voice in her ear telling her who Ellie is and how to react.

Chuck notices pretty quickly that there’s something off with Sarah, something not right. Morgan reassures Chuck that Sarah’s just dealing with the shock of being kidnapped last week. And a little bit later, Morgan and Casey are talking about Chuck’s concerns and about how there will be no more missions, no more gun fights, although Morgan still gets on Casey’s nerves, this time by eating taquitos without a plate, forcing Casey to scrub the floor. Casey stands up in his rubber gloves and World’s Best Dad apron and asks Morgan “Have I changed?”

Devon and Ellie are invited to a big change, themselves, when they are both offered major fellowships from a medical center in Chicago. But Chuck is still worried about Sarah and decides to talk to Ellie about it. She, too, reassures him that Sarah is probably just dealing with the shock of being kidnapped. So when Chuck tells Sarah, Casey and Morgan that he still wants to get the Intersect from DARPA and destroy it, Quinn tells Sarah to go along with it.

As Casey says, if the Americans have a Q (as in the James Bond supply agent), DARPA is it. And sure enough, there are robots and gizmos aplenty, including an invisibility cloak that Morgan finds and starts goofing off with in an inspired bit of comedy. But the gang is there for a reason, and when they find the corridor leading to the Intersect and realize that there are at least five guards on the other side of the door, Sarah takes off and downs them all single-handedly. They get into the room, expecting to load a virus into the Intersect from a three and a quarter-inch floppy disk drive, which doesn’t make sense, but that’s the prop. Only Sarah loads it up onto the Intersect glasses.

When she pulls a gun on the three guys, Chuck cozies up to her, trying to convince her that she shouldn’t kill them, and she doesn’t. But she does lock them into the room and puts a micro-bomb on the door. After she decides not to detonate it, Quinn does. She hands him the Intersect glasses and Quinn discovers pretty quickly that they’re fakes. When Chuck cozied up to Sarah, he switched out the glasses.  As Chuck points out when he, Morgan and Casey pull themselves up from the floorboards where they survived the blast, he knew Sarah was up to something bad. Quinn uses the swap to point out to Sarah that Chuck is really bad and needs to be killed.

So Sarah kidnaps Ellie and General Beckman (Bonita Friedericy) steps in, setting Sarah up to be captured when they guys go to rescue Ellie. Except the rescue doesn’t come off quite as planned. Sarah forces Ellie to drive as they follow Chuck to the rendezvous where the CIA will capture Sarah. But Ellie isn’t going to let Sarah hurt Chuck and noticing that Sarah doesn’t have her seatbelt on, Ellie crashes the car, knocking Sarah out.

Chuck decides not to lead Sarah to the take down, but instead takes her to their house with the white picket fence and starts to tell her their story. The only problem is, Sarah isn’t ready to believe that they were really in love, although she begins to doubt herself when she sees the carving that she and Chuck made into a doorpost. Then when Quinn shows up, ready to kill them both and Chuck saves her, Sarah becomes truly confused.

Back at the apartment, Casey stops by and gives Sarah a DVD – The Chuck Bartowski mission. Turns out Sarah made a video diary of her relationship with Chuck, and she hears in her own voice everything that Chuck has told her about her own feelings. She goes to Chuck and tells him that she now believes him. The problem is that she doesn’t feel it. So she’s going to find Quinn and kill him for taking away her life.

And that’s where the hour ends. Most of the shows this past season have hinted at bringing the series full circle to its beginnings and you certainly can see that happening here. But, as noted above, this is the worst of all possible cliffhangers and the only reason two creator/producers haven’t been hung in effigy is that the second hour started almost immediately afterward.