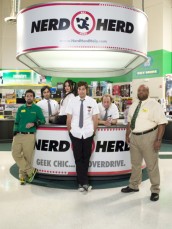 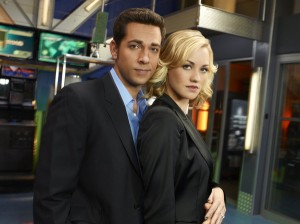 CHUCK, the romantic spy comedy that has lasted five seasons on NBC, draws to a close with a two-hour series finale this Friday night at 8 PM. Co-created by Chris Fedak and Josh Schwartz, CHUCK has chronicled the evolution of Zachary Levi’s Chuck Bartowski from nerdy Buy More employee to confused spy to genuine hero and husband of more experienced fellow spy Sarah Walker, played by Yvonne Strahovski.

Schwartz, who previously created THE O.C. for Fox and still has GOSSIP GIRL on the CW, is now in post-production on his feature film directing debut FUN SIZE and is in pre-production on THE CARRIE DIARIES, the SEX AND THE CITY prequel series, for Warners Television. We weren’t able to catch up to Schwartz before CHUCK’s cancellation was certain, but here are some previously unpublished reminiscences regarding the series.

ASSIGNMENT X: Obviously, the 2007-2008 Writers Guild strike was tragic for a lot of people in a lot of ways, but did that give you any breathing room in terms of extra time to think about Season Two, or was it just a completely horrible interruption?

JOSH SCHWARTZ: It was unfortunate in the sense that the show was really building momentum [before the strike happened] and building in terms of I think the episodes themselves, and the numbers were going up, so that was sort of a bummer, but short of that, it’s always nice to have time and spend the time on the creative, and to have a break and let the cast have a break. Zach works like eighteen-hour days, seventeen days a week, so I think for that reason alone, it was a nice chance to take a beat and refresh and come into [the second] season guns blazing, because we recognized the challenge of being off the air for so long.

AX: Was the second season when you decided to have multi-episode arcs within each season?

SCHWARTZ: We started off [second season] with a handful of kind of one-offs, and I felt people really locked into the show when Chuck went back to Stanford, and that really tapped into the mythology of the show a little bit. And then Bryce Larkin [played by Matthew Bomer] returned. And then you got into Fulcrum a little bit. And there was like a four-episode arc where it really felt like each episode was building on itself successfully, and you can just feel that out there, the temperature of people responding to the show and getting invested in the show in a different way, as opposed to, “Oh, this is enjoyable and funny.” All of a sudden, it was, “Oh, this is compelling! I need to watch it every week.” And so we were really starting from that in mind.

AX: Before Chuck and Sarah decided they were meant for each other, there were a lot of romantic triangles. Sarah and Bryce were interested in each other, Bryce had a history with Chuck’s former girlfriend Jill, played by Jordana Brewster, who turned out to be an enemy spy, Sarah got involved with Brandon Routh’s character Daniel Shaw, who turned out to be crazy and vindictive …

SCHWARTZ: I love me a love triangle. So yeah. We did this with Bryce – you got a sense of Chuck, and then we brought in Rachel Bilson for a couple of episodes, but she was sort of a character who could never really know the history with Chuck. From the very first minute of the pilot, Chuck’s talking about Jill and how she broke his heart, and so we had planned to bring her back at the end of [first] season, if it hadn’t been for the strike. So there were two characters that we really wanted to get to right away. One was Roan Montgomery [played by John Larroquette], seducer of women, we thought that would be a fun character, and we got to hint at a sexual history between him and General Beckman [Bonita Friedericy], with all the women he seduced, and it was a nice moment for her. And then Jill was the other character that we really wanted to get back into the show. She was the most important character in terms of Chuck’s [romantic] mythology. We wanted to get somebody who was going to be great and beautiful, but also smart and a doctor and she gets to do action, comedy and romance and Jordana’s be great. It was a huge arc for us and it set the show off in a new direction.

[Jill] is somebody who has real traction with the history, she’s a legitimate threat, she’s beautiful and cool and smart and dynamic, she gets some information about what Chuck may actually do for a living, which means she can have a real relationship with him, so it’s a real threat to romance. And I have to say, the Chuck/Sarah stuff, we owned it right out of the gate in terms of their relationship. So it’s incredibly romantic, Zack and Yvonne have scenes that are really heartbreaking and emotional and they’re both great in them.

AX: There were so many people involved, was it more of a quadrangle than a triangle?

SCHWARTZ: It was a rhombus.

AX: There have also been some other big emotional issues, like when Adam Baldwin’s character Casey was ordered to neutralize the Intersect.

SCHWARTZ: Exterminate Chuck? Pretty big deal. It’s hard for him, but he’s also a man that follows orders, and Baldwin is so good and he’s so funny, but he can also hit a lot of different notes.

AX: When you hired Linda Hamilton to play Chuck’s mother, how tempting was it to make references to her role as Sarah Connor in the TERMINATOR films?

SCHWARTZ: I think the iconic power of Linda and Sarah Connor doesn’t need extra commentary. We [had] a joke in there somewhere. We tend to do that from time to time. Chevy Chase was quoting lines from FLETCH [when he played guest villain Ted Roark].

AX: Has it been hard running both CHUCK and GOSSIP girl simultaneously?

SCHWARTZ: Look, he’s done some pretty bad things and I think we actually saw him at his lowest. And he’s done some great things and he’s shown that he’s a real romantic, too, and I think with an actor like Ed, you have somebody who can take you there and you see how charming he is, how you love that guy, and people find his character fun and enjoy taking that ride with him.

AX: When it started, did GOSSIP GIRL sort of fill any separation anxiety regarding THE O.C.?

AX: And did CHUCK fulfill the comic book side of your personality?

AX: So was running both of these shows satisfying both halves of your personality?

SCHWARTZ: Yes, it is. My feminine side and my masculine side are completely well taken care of.

AX: Anything else you’d like to say about CHUCK?

SCHWARTZ: I guess what I’d say is, I’ve been fortunate to do [a number of] shows. When I watch the show, when I go on the set, when I see people interact with Zach, I feel like I just know that the show is good, it’s the most sophisticated show that I’ve ever been part of and I’m really proud of the show.