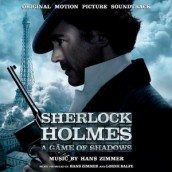 The game is afoot again for Hans Zimmer

Sherlock Holmes was always a bit of a stuffed British shirt before Guy Ritchie gave him a rock and roll, martial arts attitude that re-invigorated the character with his SHERLOCK HOLMES franchise and its latest installment SHERLOCK HOLMES: A GAME OF SHADOWS.

Part and pipe of Ritchie’s in-your-face makeover was Hans Zimmer’s audacious score, whose crashing player pianos, scratchy strings and bombastic orchestra gave a terrifically fun, steampunk attitude to Holmes, in much the same way as his defiantly anti-historical music brought unexpected juice to the PIRATES OF THE CARIBBEAN soundtracks. Now Holmes and his ever reluctant partner Watson are back to take on the arch-nemesis Moriarty, with Zimmer’s hellzapoppin’ period stylings thankfully back for a ride that’s equal parts deduction, slam-bang action and overly slop-mo’d pursuits.

When your original score isn’t broke, it’s not a good idea to fix it. But since Zimmer’s original SHERLOCK HOLMES score had a broken-down sound to begin with, it’s a near-impossible task to top that rude perfection. And while the new SHERLOCK and its score might not equal the original, it’s a terrifically fun ride nonetheless.

The musical game is more darkly afoot as Zimmer pits the war-mongering, Teutonic storm clouds and calculated, tick-tock percussion of Moriarty’s evil schemes against the manic energy of Holmes’ utter confidence. Giving fun warmth to the case is the return of all of our favorite Holmes themes and the Eastern European ethnic sound which made Victorian England seem like a Klezmer mosh pit. With a Gypsy heroine this time out, Zimmer brings her people’s wild dance rhythms to the forefront, giving the score extra spice along with its innovative familiarity.

Unlike Moriarty, Hans Zimmer is a composer who’s exactly as clever as he thinks he is, especially when it comes to  GAMES‘ best musical bits where he warps other composer’s pieces to his own deliciously twisted ends- giving Schubert’s pleasant ditty “Die Forelle” a drugged-out, reverse-sample backdrop, or turning Mozart’s opera “Don Giovanni” into a slam-bang race against time, But perhaps taking the cake is how Zimmer brings out the hee-haw fun of Ennio’s TWO MULES FOR SISTER SARAH, a choice right in line with Morricone-esque quality of SHERLOCK‘s guitar work- brilliant temp love if there’s ever been a case for it.