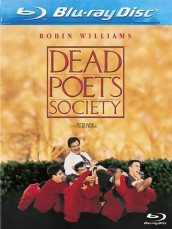 DEAD POET’S SOCIETY was a great movie the year it was released in 1989, but it’s also aged incredibly well over the years with its timeless story of non-conformity and free-thinking set at an all boy’s private school circa the 1950s.

Robin Williams (in a very under-stated and quite effective performance) plays Professor John Keating. A former student at Welton Academy, he’s now returned as a teacher and hopes to impart the lessons he learned on his new charges.

Of course, he has his own way of doing things – and when he asks the students to rip out certain pages from the text book that he doesn’t agree with, he sends many of the students on an path they never quite knew existed – or they were capable of reaching.

The core of the group consists of newcomer Todd Anderson (Ethan Hawke) who is just learning his ways around the school and also trying to discover who he is and what he wants to be; Neil Perry (Robert Sean Leonard), an ambitious academic who wants to partake in creative arts including acting, but whose domineering father (Kurtwood Smith) wants him to be a doctor; and Knox Overstreet (Josh Charles) whose infatuation with a pretty high schooler (who has a bruiser of a boyfriend) gets him into loads of trouble.

The title comes from a secret club Keating had been a part of when he was a student and which is secretly resurrected by these younger Welton students where they recite and read poetry from the greats – as well as their own.

DEAD POET’S SOCIETY is a wonderful movie directed with care and tact by Peter Weir and scripted with honesty by Tom Schulman (who took home a Best Screenplay Oscar for the film).

The acting is also superb. With Williams down-playing everything, he shows off a whole other side of himself – something he further explored throughout the 1990s and 2000s.

The rest of the cast also bring life to these roles with Leonard capturing the tortured Perry in very subtle ways. The tragedy at the end is made even more potent by Leonard’s affecting performance throughout.

The gorgeous cinematography comes to life on this new Blu-ray edition – remastered in the Hi-Def format and looking better than ever. Granted, it would have been nice to also have the Director’s Cut of the film included (which has only been available on previously in the Laserdisc format), but that’s a minor quibble.

All of the special features are taken directly from the 2006 Special Edition of the film – but they’re plentiful. They include a featurette looking back on the film with interviews with the director and actors. “Raw Takes” shows some alternate footage during filming. This would have been the opportunity to include the scenes that were on the director’s cut, but sadly, it wasn’t meant to be. Featurettes on the sound design and cinematography round things out.

DEAD POET’S SOCIETY was also released on Blu-ray the same day as 1987’s GOOD MORNING VIETNAM which provided another great dramatic role for Williams. The two make up a great double-feature, though it’s DEAD POET’S that resonates long after it’s over and proves why it continues to endure and provide great meaning some twenty years after its original release.