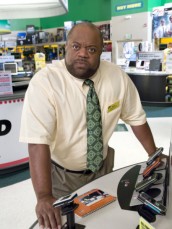 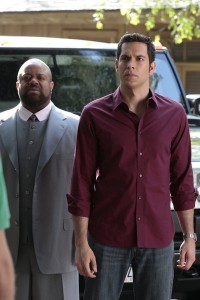 Actor Mark Christopher Lawrence is known to stage audiences for his comedy in both the stand-up and gospel arenas. In film, he’s had small roles in huge pictures, including TERMINATOR 2: JUDGMENT DAY, CRIMSON TIDE and the cult favorite FEAR OF A BLACK HAT. On television, the Los Angeles native has appeared on many series, but most viewers know him for his series regular role as Big Mike on NBC’s CHUCK, which airs Fridays at 8 PM.

In five seasons of CHUCK, Big Mike has gone from being the manager of the Buy More store to an enthusiastic assistant manager. He’s one of the few characters who has no idea that many of his coworkers are hip-deep in espionage.

Lawrence talks about his work on the series – and a promotional appearance that had a lasting effect on his view of life.

ASSIGNMENT X: When you started on CHUCK, did you realize it had the potential to get such a big fandom, with the Subway sandwich campaign of love?

MARK CHRISTOPHER LAWRENCE: Not until about halfway into the first season. I thought, “Wow, this show has legs.” I wasn’t a series regular then, and so we cut a deal mid-season and here we are.

AX: Do you have a favorite aspect of playing Big Mike?

LAWRENCE: I think in real life, I’m so nice all the time that to play the sort of surliness of Big Mike is probably the most fun for me, because it’s a big stretch for me. In a way, the farther away from me it is, the more fun it is to do. The whole Big Mike character is so far from me that it’s a lot of fun.

AX: Would working at a Buy More drive you insane in real life?

LAWRENCE: In real life, I don’t think I’d be able to do it. Film at eleven [laughs].

AX: Were you surprised by the development of the romance between Big Mike and Morgan’s mom?

LAWRENCE: No. One of the writers had mentioned it and then it came up at Comic-Con [in 2008], and then when it happened, it was funny [laughs]. I’d like to see [actress Patricia Rae, who plays Bologna Grimes] again – she’s very funny. 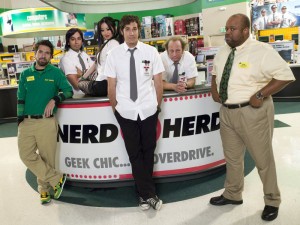 AX: Were you sad when the giant fish in Big Mike’s office got broken?

LAWRENCE: No, I wasn’t sad [laughs]. I was more sad in the episode where I was supposed to go fishing. There was a break-in at the Buy More and I didn’t actually get to the pond. So that kind of bummed me out, but there was a silver lining to the cloud, in that I was able to knock the guy from Fulcrum out.

LAWRENCE: Yeah, I’ve had a couple of scenes with Adam [Baldwin, who plays Casey], and his timing is great. It’s a lot of fun to work with him.

LAWRENCE: I like the CIA stuff in there when I’m involved in it, because it ups Big Mike’s fan quotient. People like to see Big Mike get into the mix. I hope Big Mike has an opportunity or two to inadvertently fall into the spy stuff like he did in second season, knock a couple of guys out here and there. That stuff was fun. It would be nice if I got a couple of stunts, especially now that I’ve been working out like crazy for over a year now. It would be nice to do a stunt and not need oxygen afterwards.

AX: Do you have fun when the show does gags like knocking over racks of merchandise, or do you just think, “And here we stand, waiting for the riggers to rig the merchandise racks for several hours”?

LAWRENCE: Sometimes the gags are fun. That particular stunt worked great in the rehearsal and never worked again.

AX: If the gag didn’t work when it was shot, what are we seeing in the final aired version?

LAWRENCE: Probably various takes [cut together], because it didn’t work the way it was supposed to work.

AX: So all the racks aren’t really falling over at once, they just cut it together so it looks that way?

AX: How is it playing Big Mike as a regular employee at the Buy More, instead of as the manager?

LAWRENCE: Well, this is not the first time. Big Mike has lost his job a couple of times already, so he’s on his way back to the top.

AX: Were you alarmed at all when you found out the Buy More was going to blow up at the end of Season Three?

LAWRENCE: When I read that script, my heart sank a little bit. I was worried.

AX: Did the producers immediately reassure you, or did they wait until they had a renewal to reassure you?

LAWRENCE: There was no reassuring at all. I think the producers were just as much in the dark as to what was going to happen [as the actors were] – they were just trying to let it all hang out that last episode, because you’ve got to make it exciting and make people want to see it and it worked. Big Mike’s last scene, where he says, “They did it. They blew up the Buy More” [laughs], I think that’s my favorite moment from Season Three.

AX: How did you feel about Big Mike going very briskly from managing the band Jeffster to saying, “I hate your music, get out of my car”?

LAWRENCE: That’s the way managers are [laughs]. That’s been my experience. I thought they were right on the nose with that one. That’s the way it works. 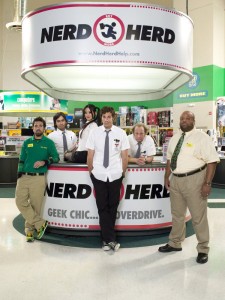 AX: Do you feel that Big Mike has evolved in any particular way over the seasons?

LAWRENCE: I think that Big Mike is evolving in that every time he takes a fall, he learns something new about himself and he comes back a little better.

AX: Do you think he might ever mellow out substantially, or would that kill him?

LAWRENCE: I think if Big Mike mellows too much, he’s probably dead. We’ll see how this season ends up.

AX: How has the rock star experience been at Comic-Con?

LAWRENCE: The rock star experience was great. It was really funny to watch Vik [Sahay, who plays Lester] and Scott do their thing [as the band Jeffster] in front of a huge audience, because we’d seen it on set and it’s just not the same. People were screaming. It was great. It was like, ‘Boy, I know rock stars!’ [laughs]

AX: But presumably when you guys all came out on stage, everybody was screaming for all of you.

LAWRENCE: People were going nuts, yeah. ‘We love you, Big Mike!’ It was great, a lot of fun.

AX: What have you been involved in besides CHUCK? You’re in a film with Scott Krinsky, who plays Jeff, and Patricia Rae, who plays Bologna Grimes…

LAWRENCE: I do sing. In the DVD I’m not singing, because we didn’t license the music. We sang in the live show, but when we cut the DVD together [from video of the live performances], it’s just the comedy. I’ve been doing a lot of standup comedy. I also went to San Antonio,Texas, to Fort Sam Houston and visited wounded warriors at the Center for Family Support and just hung out.

AX: Are they big CHUCK fans there?

LAWRENCE: Yes. We actually watched an episode there, I watched an episode with them and spent some time with their families that evening and the next day did a signing. It was a lot of fun and it gave me a whole different perspective on life itself. The things that I think are problems are not problems. I have no life-altering problems and I think if more people got involved and spent some time with these guys and see what they’re overcoming, it would make people think, “You know what? No matter what I’m going through right now, I can get through it.” I met a kid who had been blown up and both legs and arms, the hand on his good arm, he was blind, he had a skull injury that he’s going to have to have another surgery and have a plate put in, because when he coughs you can see his head moving, and that kid was so upbeat and so funny and so lively and he said to me, he says, “Mr. Lawrence, you’re quiet all of a sudden.” I said, “Well, I’m sitting here and I’m looking at you and I’m thinking, ‘You’re changing my life as we talk.’” I said, “When you get out of here, you have to go out and tell your story, because you’re going to affect people and you’re going to make people have hope.”

AX: Anything else you’d like to say about CHUCK or your career overall?

LAWRENCE: CHUCK I think is probably one of the highlights of my career and overall it’s been a fun ride. I’d like to say that CHUCK has the most amazing fans in the world. I love our fans to death. I Tweet and Facebook them every day. I send them a positive message every day, because they support the show so strongly.