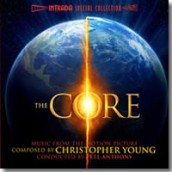 Christopher Young proves himself the master of disaster

If it’s going to be the end of our globe as we know it, leave it to Christopher Young to be damn sure to try and save it with a big bang instead of a whimper for THE CORE. After doing many ferocious scores about the depths of hell, Young actually got to go to the pseudo-scientific thing with this journey to the musically raging center of the Earth, its hugely entertaining disaster-movie mission to re-ignite of our planet’s very CORE.

Sensing the monumental burrowing task at hand, Young responded with more notes than a Mahler symphony for what stands as one of the most balls-out orchestral scores of the last decade. Yet THE CORE is far more than a collection of raging string and brass movement, as Young’s distinctive themes track the terranauts with a brawny sense of the human spirit. Voices soar with spectacle of a diamond chamber, stirringly patriotic melodies never surrender in the face of sacrifice, and relentlessly excited percussion lands the space shuttle in the most stunning of the soundtrack’s many long action set pieces.

All this is more than enough melodic spectacle to merit two CD’s from Intrada, with the composer re-arranging the score order for optimum impressiveness, as well as describing his epic game plan for Brian Satterwhite’s entertaining liner notes. Big in the best sense, Young’s got the Irwin Allen spirit within him for this bravura display of unleashed musical energy.