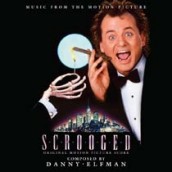 Danny Elfman has never made any bones that the holiday has always been a dead man’s party for him, particularly with his cheerfully demonic, and demented holiday score that updated Ebenezer into a miserly, public-hating and altogether sleazy TV executive.

Just as circus music is ingrained into Danny Elfman’s musical DNA, the holiday trimmings of sleigh bells, caroling and snowflake-like melodies have kept showing up in the Hanukkah-celebrating composer’s work, even when his scores weren’t about Christmas. But among the soundtracks that have directly dealt with the holiday like EDWARD SCISSORHANDS, BATMAN RETURNS, THE NIGHMARE BEFORE CHRISTMAS and FAMILY MAN, SCROOGED  just might take the gonzo antlers. Director Richard Donner definitely hired Elfman on the strength of BEETLEJUICE’s supernatural shenanigans, reasoning that Elfman’s playful darkness would be a good match for Bill Murray’s manic performance.

Beyond announcing the SNL star’s descent into angry guy parts from 1988 on, Elfman’s SCROOGED  score is a fiendish delight, twisting about such holiday favorites as “Dance of the Sugar Plum Ferries” and “Santa Claus is Coming To Town” (along with “It’s Howdy Doody Time” for good measure) into evil Xmas portents. As with his best supernatural work, Elfman’s SCROOGED at once goes to town with the rhythmically cartoonish possibilities of the undead, while also playing the uncanny with gravely serious orchestral intent. It’s an unhinged, and thoroughly offbeat sound here that would deservedly launch Elfman into the realm of big ticket effects vehicles, with a sound which lets you hear that BATMAN‘s Joker is right around the corner. But it’s the holiday spirits that get the last laugh in SCROOGED, one that’s way more Halloween before it becomes Christmas.

La La Land does an exceptional job of joining SCROOGED‘s many short cues into a melodically cohesive listen, with several bonus tracks of even more chillingly festive music. Elfman’s source cues are also a delight, from the big top music of “Frisbee the Dog” to the snooty “Chez Jay String Quartet” and a perky “Jingle Bells,” all capturing the cheesy taste of an anti-hero raised on the boob tube. But perhaps no cue nails SCROOGED’s media satire it like the evil synths and hellish rock guitars of “Frank’s Promo” a hellacious take on the importance of Xmas that just might be the funniest part of this cult film. Kudos as well to Jeff Bond’s liner notes, an Elfman expert par excellence who’s literally written the book on the composer for this year’s Grammy-nominated Burton / Elfman 25th Anniversary Music Box- a mega gift if there ever was one.