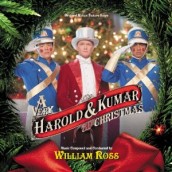 It’s part of this seditious series’ way of twisting straight-laced society that the latest HAROLD & KUMAR movie – A VERY HAROLD & KUMAR 3D CHRISTMAS –  has gotten William Ross to do a lushly melodic score for number three in 3-D. After all, this is the THUMBELINA composer who’s also orchestrated the warm, fuzzy, child-friendly sound of Alan Silvestri’s THE POLAR EXPRESS and A CHRISTMAS CAROL.

So it’s fitting he’d apply said holiday magic to a VERY special yuletide film filled with s pot-crazed super baby, a sadistic Russian and an ornery Mexican hombre. But it’s in how well Ross nails that eclectic, eccentric glow, from Santa’s cherubic cheeks to the sparks of a rapidly extinguishing joint, that’s part of this hilarious holiday score joke.

Imagine the caroling sound of HOME ALONE gone very wrong, but without winking an eye at its naughtiness, and you’ll get the thoroughly fun musical gags here. But when William Ross isn’t running down the checklist of Williams-worthy Xmas emotions, the composer has a blast with the film’s more obvious insanity, from Mussorgsky exploding on steroids, the dying, heroic gasps of a wafflebot and pastiches of THE MATRIX,  Spaghetti westerns, NAKED GUN jazz and caped heroism. But where another, less seasoned composer might make these musical jokes plain stupid, Ross turns them stupid-smart, and completely hilarious. It’s a score whose Loony Tunes humor, and orchestral production values are fully baked.

Oftentimes an accompanying song album turns out to be a lump of coal in my stocking. But Water Tower Music’s HAROLD  tune collection is as much of a delight as the score CD. Think you can throw it on for the family with chestnut tunes by the likes of Perry Como and Johnny Mathis? Just watch out those four-letter sound bytes sandwiched in between them, let alone Big Boi’s rap of “Daddy Fat Sax,” Ross joining with Paul Oakenfeld for an electronica-orchestra battle of “Carol of the Bells” and Doogie Howser himself doing a way-too cheerful Christmas Medley, very much via Broadway.