TV Review: DOCTOR WHO – Series 9 Premiere – “The Magician’s Apprentice” and “The Witch’s Familiar” 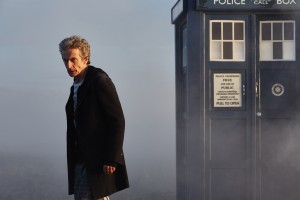 The first season of DOCTOR WHO where a new regeneration of The Doctor is introduced is always a bit of a dicey phase. The Doctor is never really who is he is going to be with his new face, and you kind of have to get around all of the more unstable parts of his personality post regeneration. Having said that I did enjoy Peter Capaldi’s first season as the new 12th Doctor. The writing wasn’t completely solid, but there were plenty of episodes that I thought were extremely well-executed, and “Listen” is one of my favorites.

I’m doing a two-for-one special with the first two episodes of Season Nine of DOCTOR WHO, since I was on vacation when they aired and had to play catch-up once I returned home. (Which incidentally is not a bad way to watch a two-part WHO story.)  “The Magician’s Apprentice” and “The Witch’s Familiar” are a nice strong kick-off to the latest batch of adventures featuring the 12th Doctor (Peter Capaldi). These episodes bring in elements from the 10th Doctor (David Tennant) and also from the classic series, so honestly I couldn’t be more pleased with this season so far.

The Doctor is being summoned by one of his oldest foes, who happens to be dying. Does this mean that The Doctor expects his own life to end as well? It certainly seems that way as “Apprentice” starts out. Also in the first five minutes, the audience is privy to an event in The Doctor’s life where he has the opportunity once again, to stop the Daleks from ever being created. Do you change history that radically and damn the consequences or do you save an innocent child who will one day grow-up to be a terrible monster responsible for the creation of a race that obliterates almost everything it touches throughout the known universe? He’s The Doctor. He figures something out.

Let’s start with the supporting cast in these first two episodes. Clara (Jenna Coleman) is back of course, and this season starts with all of us in the viewing audience aware that this is her last season. It was announced a couple of weeks ago that Coleman is leaving the world of WHO to headline a new period drama for ITV. So keeping that in mind, of course Clara is suddenly the fun, and spunky sidekick she started out as with Matt Smith’s 11th Doctor. I loved Clara in her first season and a half, but when paired up with a new Doctor, the writers decided to make her unlikeable, domineering, self-involved, shallow, and more than a bit bitchy. I absolutely loathed Clara at the end of last season. The melting of the TARDIS keys, despite the reasons and deep emotions that caused that act, became the last straw for me. I wanted her out of the TARDIS and off of the show. It makes it exceedingly difficult to watch WHO when you aren’t fond of the companions, as they are supposed to be our window into the world of The Doctor. I didn’t lay blame on Coleman as she was working with what they gave her, but all the same Clara needed to go. She had worn out her welcome. Now, however, I will be truly sad to see her go; with the caveat that she stays as personable and brilliant as she is in these first two episodes.  Not only is she working with U.N.I.T. when she is back on Earth without The Doctor, she’s matured and really come into her own as a character.

The other companion for this first two episode adventure is Missy (Michelle Gomez), back from the dead, which is explained, and I really can’t get enough of this ridiculously zany character. Missy is The Master in female form, and Gomez plays her with such delicious and unrepentant glee that you can’t help but like her; even when she is slaughtering innocent bystanders. I hope Missy sticks around for quite a while. The buddy cop movie writing that went into her teaming up with Clara is inspired genius. The two actresses play off each other perfectly, and there are really lovely moments like Missy telling Clara she is a pet dog for The Doctor, and later testing the depth of a hole in the ground by shoving Clara into it. It’s clear the two women get on in real life, and it translates so well to the screen.

While we’re on the subject of the return of old foes, let’s chat a moment about Davros (Julian Bleach) and the return once again of the Daleks. It’s fantastic that they brought back Bleach to play Davros, since he was the man inside of the make-up the only other time in the modern run of WHO. He really seems to understand the character’s different levels, and he might have just squeezed a couple of tears out of me. I loved that he said The Doctor’s new face was closer to his own, and asked him if The Doctor considered him a “good man”, which was the through line of last season for The Doctor himself.  The Daleks were finally what everyone wanted from “Asylum of the Daleks” a few seasons ago, Daleks from the 1960’s to current all working together and interacting just being Daleks. A nice cross section, and considering that they too travel through time and space, why wouldn’t all of the different versions be together, especially on a re-built Skaro?

Which brings me to another point. I’m sure some fans hate it, but I think it’s an interesting choice for Steen Moffat to bring back all of the elements of the classic WHO that previous showrunner Russell T. Davies did away with; such as Gallifrey, the Timelords, and Skaro home planet of the Daleks. Davies whisked all of those elements under the rug labeled “time war” and reset The Doctor’s status quo. I think it works now, the further the series goes to bring things from the past back. I personally have no issue with it.

I also loved the inclusion of The Shadow Proclamation in this premiere! We haven’t seen them in FOREVER, and again it tied it back to the 10th Doctor nicely.

The Doctor himself is really hitting his stride. Capaldi seems a bit more comfortable with his persona, and the writers are more than likely able to write better for him now that they know where this Doctor has been and presumably where he is going. I unabashedly love the 12th Doctor, and there are so many more levels and nuances to him just in these first two episodes, that I can’t WAIT to see what happens next.

Related: Interview with DOCTOR WHO showrunner Steven Moffat on Season 9