How do you do WALKING DEAD on DOCTOR WHO? With Cybermen of course! 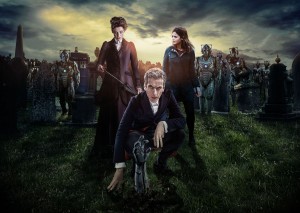 Once again I find myself faced with writing a review of DOCTOR WHO and having to drop all kinds of spoilers to do an effective job. I usually shy away from spoilers, but I just have so many questions buzzing around in my head after “Death in Heaven” that I have to bring up things that we game changing, or even just confusing in this season’s finale.

Again, let’s just start with Danny Pink (Sam Anderson) is dead. Still dead that is. And as the Cybermen start to rise up, Clara (Jenna Coleman) is trying to pass herself off as The Doctor. Which if you were paying attention makes for a very interesting credit sequence.

Let’s talk about the Cyberman and Missy’s (Michelle Gomez) plot to turn all of the world’s dead into a cyber-army. Even though zombies were done during the 9th Doctor’s (Christopher Eccleston) tenure in “The Unquiet Dead” you want to do walking dead again on DOCTOR WHO? Then you better find a way to have rotting corpses shuffling around without having rotting corpses shuffling around. The Cybermen are underused and are little more than puppets, which I have already seen ticked quite a few people on Twitter off. I mean, the idea of all of Earth’s dead becoming Cybermen is nifty, but you still have to have a brain to make a functional Cyberman. Many of the graves they showed were so ancient there is no possible way there would be any grey matter left for a Cyber-upgrade, but that is all explained when Missy takes control with her little bracelet and makes them do airline drills.

The Doctor (Peter Capaldi) rounds out his first season with loss, loss, and a tiny bit more loss thrown in for good measure. As the new acting President of Earth, The Doctor has a new found autonomy and backing that he’s never officially had before, but sadly never really gets the chance to make ANY executive decisions. So it is an interesting but thrown away plot thread.

So let’s go back to loss, loss, and more loss. One of the biggest that has Whovians up in arms is the death of Osgood (Ingrid Oliver). Which admittedly, just seems like a really mean tease. The Doctor tells her to put all of time and space on her bucket list, and just as the audience starts to whoop it up that she MIGHT be the next companion; she gets turned to dust by Missy. But, what if she was the Zygon Osgood from “The Day of the Doctor?” There’s always a way out in Science Fiction, so I haven’t ruled her return out completely.

The next loss is one that actually happened off camera a while back and that was the loss of the Brigadier (Nicholas Courtney);  The Doctor’s “commanding officer at U.N.I.T., and more importantly a good friend. The Brig came back in THE SARAH JANE ADVENTURES, but he never made it back to regular WHO, and Nicholas Courtney passed away a few years ago. Fans never got the chance to say goodbye to that character, and which the inclusion of Kate Lethbridge-Stewart (Jemma Redgrave) has helped a bit, we all still miss the Brig. It was nice to have the Brig return, in a very surprising way to save his daughter, the day, The Doctor, and to get one salute out of The Doctor as a way of saying goodbye. Not. A. Dry. Eye.

Which brings us to the loss of Missy. Supposedly blasted into nothing. Or was she? I figure the Master has survived death so many times, she probably has a teleport that got her out of the way just in the nick of time. And the somewhat shaky explanation that she was saved along with Gallifrey and that the home planet of the Timelords is back, somewhere, was an interesting if maddening tease. Nice of Moffat to loop back around finally to where The Doctor said he was headed at the end of the 50th Anniversary special at least.

Then we also had the double official loss of Danny Pink as a Cyberman and his self-sacrifice not only there, but in staying in the Nethersphere and sending the kid that he accidentally killed in combat out into the real world to have a second chance at life. So yeah, he was never a favorite of mine, but he had a well-written and noble ending. But, as many have speculated, since Clara met their decedent, does that mean she is pregnant with Danny’s child? Maybe that’s part of the Christmas plot?

Clara is of course The Doctor’s final loss in this episode. It is gut-clenching only because the two of them are too stubborn to tell each other that life has gone to s**t and they need each other. They hug, and The Doctor reveals he doesn’t hug because, “Never trust a hug, it’s just a way to hide your face.” Which is such a wonderfully painful moment on Capaldi’s part, he just sticks in the emotional knife and twists.

The episode overall was pretty rapid fire, but the pacing keeps you interested, and let’s face it the visual of the Cybermen crawling out of graves in a centuries old graveyard is one of the creepier things WHO has thrown at us in a while, well at least since “Listen.”  Kate Lethbridge-Stewart gets to throw around a 60’s Cyber helmet from “The Invasion”, which is infinitely brilliant! Oh yeah, and the episode ends with Nick Frost as Santa Clause. Christmas is going to be interesting this year! Until then kiddies.