Playing a performer's big, bloody break in the devilish cult of fame seekers

If you thought being a ballerina in the cutthroat world of dance was enough to drive a young woman mad, just try making it as an actress in the psychopathic town of Hollywood. It’s a place that’s hell itself for the uncountable hopefuls it’s chewed up and out, no more so than for those who’ve debased themselves to climb its ladder. But when that leg up is given by the devil’s minions, selling one’s soul to Hollywood takes on a whole new horrific meaning for one particular hopeful named Sarah, who endures a terrifying series of auditions, and then far worse actions, to get that Big Role. While it’s thoroughly debatable if that Scream Queen part is worth it for her, there’s little question that the role of Sarah will do wonders for Alex Essoe, whose hair-ripping, gut-spewing performance equals the ferocity that Natalie Portman put into her Best Actress winning character in BLACK SWAN.

Born in Saudi Arabia, Essoe’s resume includes such shows as CRASH, HOUSE OF LIES and film appearances in PASSION PLAY, ECSTACY and BOY TOY – not exactly stuff to light horror geeks on fire. That’s going to change big time with STARRY EYES, especially given the critical praise justifiably being lavished on scripter / filmmakers Kevin Kolsch and Dennis Widmeyer’s movie by the industry-catching likes of Variety (with the film currently tracking 100% on Rotten Tomatoes). But as canny as this impressively shot, “little” picture is in using Satan worship as a satirical metaphor for Hollywood, STARRY EYES would have less soul to spit out without its star-making performance by Essoe. Staring out as a likeable innocent who’s already washed up in her early 20s, Essoe brings real empathy to the character that makes Sarah’s very bad choices all the more upsetting, not to mention putting bringing enough convulsive energy into her psychological, and physical transformation to make audiences worry for her very safety. Indeed, ROSEMARY’S BABY’s Mia Farrow and REPULSION’s Catherine Deneuve would likely be impressed with how powerfully Essoe conveys one of the most transfixing, and ferocious unravelings seen on screen in quite some time as she terrifyingly discovers that Hollywood is the real devil’s playground.

ASSIGNMENT X: I’ve never seen such an unsettling audition sequence in a movie. Was your actual tryout for STARRY EYES that hellacious?

ALEX ESSOE: It’s funny, because the audition process for STARRY EYES was so innocuous. It was as harmless as any other audition. I got it through my agent. I went in. There were a bunch of girls. Then a few months later I got a call back. Then a few weeks after that I had lunch with Dennis Widmeyer and we just talked about film for hour. He decided I had the right philosophy to honor the story he had written.

AX: And what’s that “philosophy?”

ESSOE: I really love the horror genre firstly, and I really believe that it’s the actor’s job to honor the writing. That should be their priority, to make it about the character. And I was in love the characters that Dennis and Kevin had written, especially Sarah.

AX: Had you ever been in a film audition where you didn’t feel safe?

ESSOE: No, that never happened to me at a movie audition. But that did happen when I was working as a model. That’s more treacherous than acting, because there’s no union for models. And there are so many of them that they’re considered very expendable. Models aren’t treated with respect, especially when they’re starting out. So there were casting calls I walked out of because I didn’t feel like everything was on the up and up.

AX: A big reason the film works is because it takes a very real look at the legions of young, attractive actors who just keep trying and trying in Hollywood. I imagine you were one of them.

ESSOE: Oh, of course I was. What really attracted me to the role is that it’s a very honest depiction of the slog of being an actor, of dealing with the rejection, the derision and the feelings of self-doubt – but at the end of the day realizing that acting is what you love. It’s all about being a professional, and having the faith that something will come out of all of this. 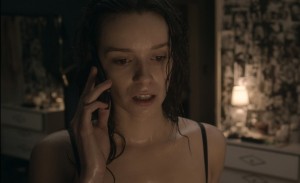 AX: But have you ever had a moment of wanting to throw in the towel, which Sarah has big time in STARRY EYES?

ESSOE: Yes. There were a few moments when I first moved to Los Angeles. It was quite the adjustment. I had lived in New Mexico for a few months working on things before spending most of my money on a car to get out here. I was living on couches, so there were moments where I asked myself if this was really all worth it to have everything I owned in a suitcase. If any actor’s answer is “Yes” to that, then they’ve got to keep on going.

AX: What do you think of the people who’ve compromised themselves like Sarah does, if with far less satanic results?

ESSOE: I feel a few ways about it. One, I think it makes things more difficult for those of us who aren’t willing to compromise like that. It makes me sad when people think it’s necessary, to not have enough faith in their own momentum and abilities. While I don’t know anyone who’s done that personally, I wouldn’t hold it against them. They felt they had to do it. And they’re the ones who have to live with themselves. But now that we’re in the 21st century, I’d hope that actors wouldn’t think that “favors” are necessary to make their mark.

AX: What do you think of Sarah?

ESSOE: She’s such a babe in the woods, and so hard on herself, which is one of the things that break my heart about her. Sarah’s intentions are so pure. But she just doesn’t like herself enough to set real boundaries and to be aggressive in her approach to acting. She leaves it up to other people to define her, and to tell her what is expected.

AX: Given the hell that Sarah goes through, were you ever worried about your own safety while shooting STARRY EYES?

ESSOE: I really wasn’t, though there was one moment where she has to spit up maggots. I had to keep putting in and taking out a maggot from my mouth. That was the only time I felt on edge. But at the same time, I volunteered to do it, because I thought I was being super tough. But no, I was not tough. And the director of photography had to keep me calm and talk me through the scene. I hope all of that footage ends up on the dvd! But it was an extremely safe working environment. Everyone was gentle and respectful.

AX: Yet at the same time I can’t imagine there were a lot of yucks between takes. Did you need your own space to keep this kind of terrified momentum going?

ESSOE: It really depended on what we were shooting. There were times when there was a lot of joking around between shots. But at others I needed space to access Sarah. And everyone was very understanding of that.

AX: Did you study movies of women going off the deep end to psych yourself out to play Sarah?

ESSOE: It’s funny you say that, because I already love all of those movies. One of the reasons I wanted to do STARRY EYES was because I was a fan of films like ROSEMARY’S BABY and POSSESSION. That whole “HOUSE OF PSYCHOTIC WOMEN” thing is one of my favorite genres. But actually the one movie I did watch to prepare for this movie was GILDA. I watched it like a hundred times, because that to me was Sarah’s favorite movie. She wanted to be Rita Hayworth. So I made her fantasy my own.

AX: Were you ever worried about how far STARRY EYES would go in terms of depicting Sarah’s madness?

ESSOE: No. I wasn’t worried about that. I trusted in our directors. And as long as I was the one doling out the punishment, I didn’t mind where it went. No, I’m just joking! But I thought that the most violent parts in STARRY EYES weren’t gratuitous in any way. Even the “worst” sequence is strangely justified in my opinion, because Sarah makes a very clear decision to “go for it” to impress the cult. So the extreme violence in the film is very justified, and it looks really, really cool!

AX: In spite of material that might freak out mainstream critics, STARRY EYES is getting a lot of great reviews, I think because of it’s smart, satirical take on Hollywood that even the most jaded critics can really appreciate.

ESSOE: Yes. But it’s not only about Hollywood. STARRY EYES takes a satiric view of how people look at Hollywood from the outside, while also taking off people who want to reap the rewards of Hollywood. That’s rife for satire, because you meet all sorts of crazy characters around the industry, including Pat Healy’s character. He’s hilarious as Sarah’s boss at a chicken restaurant.

AX: Do you think the horror genre is more susceptible to craziness than say romantic comedies are?

ESSOE: I would say so. With horror, there are so many sub-genres. And a lot of them are extremely character-driven. A lot of the flaws, neuroses and psychoses are what drives horror movies. Romantic comedies are more about the romance, the relationship between two people. They’re there to entertain audiences and make them feel good with this lovely fantasy. With horror, it’s so much more of a deviant genre. They give you the freedom to explore the ugly side of human nature, much more than the comforting side. 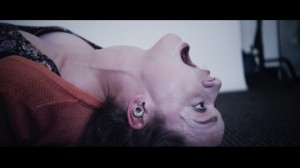 AX: STARRY EYES is likely to get you signed to much bigger movies outside of the genre. What do you think the trick is not to be typecast as a “Scream Queen,” which tends to be a literal dead-end in terms of doing quality work for actresses?

ESSOE As this is my first major part, I can’t talk too much about what actresses should avoid so they won’t stay in the horror genre. But I think it would be to choose a variety of subjects. I wasn’t looking to specifically do a “horror” film with STARRY EYES. I just wanted to play a character I loved. There are so many of elements of drama to this movie, and Sarah is a truly three-dimensional character. It’s not like I’m playing a topless co-ed in the middle of the woods, and I die. And that’s it. You need to look for projects that are challenging, and demand more of you.

AX: What do you think is the difference between extreme horror as being exploitation, or being art – as STARRY EYES is?

ESSOE: It’s funny, because exploitation is very much the theme of STARRY EYES. But it comments on that far more than it caters to it. That’s what I like so much about the movie. There are so many beautiful horror films that are extremely elevated like Ingmar Bergman’s HOUR OF THE WOLF. There’s quality over quantity in any genre. And if the story is solid, and you care about the characters, then that movie will rise to the top.

Watch Alex Essoe freak out with STARRY EYES, opening November 14th in theaters and on VOD