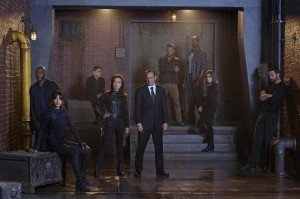 When MARVEL’S AGENTS OF SHIELD, created by Joss Whedon, Jed Whedon and Maurissa Tancharoen, based in the Marvel comics universe, debuted on ABC last year, we followed a team of agents led by Phil Coulson (Clark Gregg) on a series of adventures.

Then the feature film CAPTAIN AMERICA: THE WINTER SOLDIER was released on April 4, 2014. The S.H.I.E.L.D. agency was attacked from within by the group Hydra, whose operatives turned out to have been inside S.H.I.E.L.D. since its inception in World War II. In the very next episode of AGENTS OF SHIELD, our heroes had to deal with the collapse of their organization – and the discovery that one of their own, Agent Grant Ward (Brett Dalton), was really a Hydra spy.

By this time, everybody involved with AGENTS OF SHIELD had already done a lot of press for the series, but had to avoid spilling any spoilers about Hydra and the fall of S.H.I.E.L.D. – along with the facts that erstwhile S.H.I.E.L.D. director Nick Fury (Samuel L. Jackson) showed up to make Coulson the ailing agency’s new director and that agent Skye (Chloe Bennet) learns that she is at least partly other-than-human.

Finally able to talk about these story elements, although unable to say anything about what to expect when AGENTS OF SHIELD begins its second season Tuesday, September 23 at 9 PM, co-creators/show runners Jed Whedon and Tancharoen (who are a married couple), along with their fellow SHIELD executive producer/show runner Jeffrey Bell, are at a party thrown by ABC for the Television Critics Association.

ASSIGNMENT X: So do you guys feel like, “Oh, thank God, we can now sort of talk to the press?”

AX: Did you feel like the greater part of Season 1 was like being pregnant and not being able to tell anybody?

TANCHAROEN: I guess you could say that.

JED WHEDON: That’s a creative way of putting it.

JEFFREY BELL: And the fact that you can’t say your baby’s the spawn of Satan, which ..

BELL: A little demon Hydra baby we couldn’t talk about.

AX: Did you know about that aspect of CAPTAIN AMERICA: THE WINTER SOLDIER – that S.H.I.E.L.D. would be torn apart – from the time you were creating SHIELD?

TANCHAROEN: From the very beginning, we knew. And we knew we had to keep it a secret.

AX: Was there any thought of starting SHIELD either earlier or later because you wanted more or less story time before hitting the Hydra plot point?

WHEDON: We talked about it initially, because we were getting the show up and running and this was a big factor that was going to play into Season 1, and truthfully, it’s a great place to launch a series after, or it’s something great to happen a couple years in. We were going to deal with it our very first year, so we just had to embrace it, and what we tried to do initially was really establish the big system around S.H.I.E.L.D. and the organization as a giant beast, so that we could tear it down. And it was actually very fun for us to plan around the movie and lead up to it. Though not fun to not be able to talk about it.

AX: Was Ward always going to be the traitor, or was there thought of making it someone else?

WHEDON: From very early on. We just knew that there had to be a price to that betrayal and it had to be a personal price, so we talked about options when we were just creating the show, but it seemed like the best way to go, it seemed like the best character in terms of who he was and who he would become. And we thought Brett Dalton was definitely up to the challenge, and he was.

[TANCHAROEN and BELL both nod agreement.]

AX: Has there been anything in Season 1 that popped for you or surprised you that you started writing toward or away from?

TANCHAROEN: I think Raina was a character that we didn’t anticipate becoming such a huge part of our season. The actress, Ruth Negga, is exceptionally talented, and what she brought to the role sort of helped us to develop the character and expand that character’s participation in the season a bit more. And we can safely say that she will be a nice part of Season 2.

BELL: Raina is the first person that came to mind, but also, we knew J. [August Richards] was going to become Deathlok; we didn’t know he would do such a wonderful job. I mean, we suddenly were looking for more Deathlok stories, because he brought this humanity to kind of a monster and so that was another wonderful surprise.

AX: Can we hope to see more of him in Season 2?

BELL: Perhaps. I would say definitely maybe. [gives up on being enigmatic] Yes, yes, yes.

AX: Do you have any other cool casting surprises coming up?

AX: What about another visit from Nick Fury?

BELL: Nick Fury said in the last season it’s going to be awhile before we see him again, so we know about that.

WHEDON: But if we come up with something cool that works, because we’re part of the larger Marvel universe, he can come back?

AX: Although you mostly shoot in the Los Angeles area, you had at least one big outside-the-United States location shoot in Season 1. Might you do that again?

WHEDON: We’re planning to. A lot of that has to do with, there are a lot of actors, a lot of moving parts and figuring out schedules. We do plan to do it and I think we will, but there’s always a wrench in the works, but that is definitely our goal. We love doing that.

AX: Was Skye always intended to be something other than completely normal?

WHEDON: [joking] I thought she was totally normal. Do you guys know something I don’t know?

TANCHAROEN: We always knew there was going to be something different and special about her.

WHEDON: [joking] And it turns out she was an orphan. And that’s all there is.

AX: Can you say if Skye’s background is going to tie in to some known Marvel mythology or if that’s something new?

BELL: We can absolutely not say that.

AX: For Maurissa Tancharoen and Jed Whedon, you co-wrote DR. HORRIBLE’S SING-ALONG BLOG and contributed songs to Joss Whedon’s MUCH ADO ABOUT NOTHING, among other musical endeavors. Might you contribute any music to SHIELD?

TANCHAROEN: If we ever find the time, we would happily contribute music.

BELL: Nobody ever asks me about my music.

AX: Are you going to contribute any music?

BELL: No, I don’t play anything, but I just like the idea.

AX: Is there anything any of you would like to say about AGENTS OF SHIELD right now, going into Season 2?

WHEDON: Just that we’re very excited. We’re genuine excited and we have a lot of cool stuff coming up. I guess everybody says that, but we happen to mean it [laughs].

TANCHAROEN: I think it’s safe to say that you will root for our people.