The actor talks more about his role on the series, plus his writing/directing project 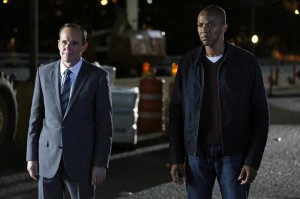 In Part 2 of Assignment X’s exclusive interview with J. August Richards, the actor talks more about his work on MARVEL’S AGENTS OF SHIELD (ABC, Tuesdays at 8 PM) as the character Mike Peterson/Deathlok, plus his writing/directing project THE HYPNOTIST.

ASSIGNMENT X: When you were on ANGEL, the producers were worried about spoilers, but it seems you’ve achieved a whole new level of security clearance working for Marvel. What is it like dealing with that kind of secrecy?

J. AUGUST RICHARDS: Having to deal with Marvel security has introduced a phrase into my vocabulary that I now overuse. For example, when the trailer for AGENTS OF SHIELD first came out, everyone was asking me, “Who do you play?” “Are you going to be on every episode?” “Are you going to be on two episodes, three episodes?” Just all of these questions that I couldn’t answer, so I started responding to things by saying, “I can’t answer that.” And I stole that and I use it in a lot of places now in my life when I don’t really want to divulge information, I say, “I can’t answer that.” It works because “I can’t answer that” could mean two things. It means you’re not allowed to answer it, or it means you don’t know. So I really love that phrase. So thanks, Marvel.

AX: You probably cannot confirm or deny this, but it is heavily rumored that Samuel L. Jackson as Nick Fury may show up in the SHIELD season finale. Do you have any thoughts of what it would be like to work with any of the AVENGERS team?

RICHARDS: Well, I think the actors in the AVENGERS movies are just cast to perfection and I think that they bring so much life and humanity to their roles. I’ve been a fan of Robert Downey Jr. my entire life and I would absolutely love to share the screen with him. I would consider myself a student and I would take notes, because I think he’s brilliant.

AX: Obviously, you worked with SHIELD executive producer/co-creator Joss Whedon for years on ANGEL. Did you know his fellow co-creators, Joss’ brother Jed Whedon and Jed’s wife Maurissa, just from being in that social environment?

RICHARDS: I did, yeah.

AX: Jeff Bell, who’s one of the executive producers and show runners on SHIELD, was also the show runner on the last two seasons of ANGEL. Is this the first time you’ve worked with Jeff Bell since then?

RICHARDS: It is, and that was really exciting, too, because he’s really wonderful to work with, so I was really happy to be able to work with him again.

AX: It seems like with the SHIELD actors, so far you’ve had the most scenes with Chloe Bennet as Skye …

RICHARDS: I think she’s fantastic and for me, she just fits in so perfectly to the world, and she’s so great at comedy as well as drama. She can be very light as well as very moving. She’s just got a natural gift.

AX: Do you watch AGENTS OF SHIELD and do you have favorite aspects of it as a viewer?

RICHARDS: I watch AGENTS OF SHIELD every Tuesday night at the exact same time as everyone else, not only because I live-Tweet during the show, but because oftentimes I don’t get the scripts that I’m not in, so I am a fan of the show and I love the intrigue that the series has built up to and I am as hooked on it as anyone else. So I love the way that it has built up momentum since the first episode.

AX: Did you already know what was going to happen on the show SHIELD in terms of the HYDRA takeover when you saw CAPTAIN AMERICA: THE WINTER SOLDIER, or did you see the movie and think, “Holy bananas!”

RICHARDS: I knew there was a huge tie-in. I didn’t get to see the movie until a week after it opened, but it was explained to me what would occur in the movie. I thought it was just ingenious. When I was a kid, though, I would always ask the question, “Why don’t they turn comic books into movies?” We had SUPERMAN, and then when I was in high school, we got BATMAN. But I always wondered why all of these great stories were not on the screen. It must be a really good time to be a kid right now.

AX: Most of the people you play are essentially decent men. Deathlok is currently being described as an “anti-villain.” Have you ever played an out-and-out villain?

RICHARDS: Yes, on ARROW [as Mr. Blank] That was a straight, unredeemable villain and I really enjoyed that part and I love that the fans of ARROW still remember the character and like the character. I loved that part. It was so much fun.

AX: You wrote, directed and produced a short film, THE HYPNOTIST, which is a pilot for an Internet series. What’s going on with that?

RICHARDS: THE HYPNOTIST is on hold due to AGENTS OF SHIELD, but also, I want it to be so perfect, and I am not a perfect writer, so it has taken a lot longer for me to give it the Christopher Nolan quality that I want it to have. So now that we’re done shooting, I’ve shifted my focus back to it. So hopefully it will be done very soon. I am scripting the rest of the planned series, so the first episode might contain a few new shots, but it essentially will be in the same shape as when you saw it.

AX: THE HYPNOTIST was shown at several film festivals. Is it available anywhere for people to see it?

RICHARDS: I’m hoarding it until we finish the last five episodes. But it’s going to be amazing and I’m still excited about it – I love it so much that I’ve shifted into this perfectionist mode, because I really just want it to be incredible.

AX: Is there anything that you can compare to your experience of being part of SHIELD?

RICHARDS: Absolutely not. This has been easily one of the best journeys that I’ve ever taken in my life, from shooting the pilot and how special that experience was, not only because I worked with Joss [who directed the pilot] again, but it’s just been pretty miraculous. It’s been more than an acting job. I’ve learned so much about myself; this is easily the most challenging role I’ve ever played and I’m just really proud of the work that I’ve done and that the writers have done and the production team and the other actors. This is a really big experience for me. I am taking it all the way back to childhood, just my love of comic books as a kid and being able to play a character with superpowers, and then to play a character that is so incredibly complex. And then to be able to watch the audience in real time follow that complexity, by talking with them on Twitter while the episode airs. I’ve never experienced anything like this.

AX: Does having Internet fandom add an extra layer to the experience?

RICHARDS: Yes. It makes me feel more connected to the audience. In the same way that you do a play, and afterwards you come out from the stage door and the audience who wants to wait for you waits for you and we talk about it. It wasn’t really around when I did ANGEL or any of the other series that I did, so it’s very, very different.

RICHARDS: That’s right. I love that.

AX: Is there anything comparable in real life where you learn sometimes about how you are perceived based on how people address you?

RICHARDS: I want to go back to something Alyson Hannigan told me when I first started ANGEL. She said, “At first, you’re, ‘Hey, you look familiar.’ Second is, “Are you an actor?” Third [would now be], “You play Mike Peterson on AGENTS OF SHIELD,” and then the fourth level is, “You’re J. August Richards.” But she left out of a fifth category, which is, “Didn’t you used to be an actor?” You’re going to auditions every day, you might be working here and there. I’ve had all five of those, and recently, more so than ever, strangers will refer to me by my full name. When I go to conventions now, there will be parents and children that will come up to me and the parents will say, “The kids know you from AGENTS OF SHIELD, but we know you from ANGEL.” And that’s my version of “Mr. Peterson,” if you will. Something about that really moves me and makes me feel really proud of the work that I’ve been able to do.

AX: Are you looking forward to the possible liberation of Deathlok so you can play his superpowers with joy and enthusiasm?

RICHARDS: Mostly, again, for Mike’s sake. I want Mike to get everything that he wants, and that is to reunite with his son and be the hero that he believed he could be, way back in the pilot. There’s that line where he says, “I could be, you know, a hero.” That line still moves me to this day, because just speaking as somebody who still believes in himself in spite of the bad hand he’s been dealt and the circumstances of his current situation. But he still believes in himself and I want him to have that victory.