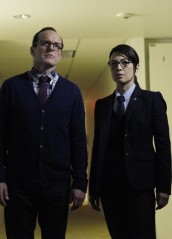 The penultimate Season 1 episode answers questions but maybe too late 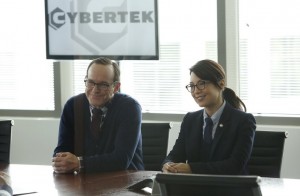 So the penultimate episode of the first season of MARVEL’S AGENTS OF SHIELD was a last minute attempt to tie all the loose ends together before what ABC has promised to be an “explosive” season finale to the show.

Obviously, this show has gone through a lot of changes and various plotlines during the course of a very tumultuous first season so an episode such as “Ragtag” was needed to explain things before presumably a new direction takes place after the finale. They even included a new white board diagram to explain everything from the first season just in case you weren’t able to follow. I find this extremely amusing and maybe a nod from the producers and writers that “Yes, we maybe let this show slip away for far too long before turning it around.”

Now, the primary focus of “Ragtag” was a flashback to how Agent Ward (Brett Dalton) became the son of a bitch that backstabbed the whole team and has been working for Hydra this whole time. But it also included some good moments with the remains of the AOS team and some decent comedy too boot. Agent May’s (Ming-Na Wen) line about “Watch out Hydra here we come” right after Fitz (Iain De Caestecker) sets the drapes on fire was gold. Plus, the Howling Commandos childhood happiness between Coulson (Clark Gregg) and Triplett (BJ Britt) was great. Also, how hilarious was the May and Coulson interview when they went to Cybertek?

The flashbacks with Ward show how he became so close with Garrett (Bill Paxton) and why he is so loyal to him and was a member of Hydra right from the get-go. But I wish there was more to it. Cramming it all into one episode seems too much here and there wasn’t enough to make us believe that Ward had always been a bad guy from the beginning. Had they spaced it out over the course of the last few episodes – giving us hints to his past and his allegiance to Garrett – it would have been a better slow burn to showing his true self.

Although I do like that he is the cold blooded guy that he has turned out to be and not just playing along for the ride – at least I hope to God they don’t turn him back in the finale and he rejoins the team. His dumping of Fitz and Simmons (Elizabeth Henstridge) into the ocean was a great villain move. Obviously, they aren’t going to kill them and they will be found in the finale but how great would it be if they did kill them off?

Speaking of getting killed off, Ward has to die next episode right? If he doesn’t something really is going to be off. Now, probably he will get a hero’s death. He will sacrifice himself to save the AOS team or something leaving them wondering what if. At least that’s what I predict. Garrett would be great to have as a bad guy for Season 2 but I bet he’s gonna say the long goodbye too in the finale despite having newly been cured of his problems with the super drug that healed both Coulson and Skye (Chloe Bennett).

So we are left with a bunch of stuff to happen in the finale. First the rest of the team are cornered by what appears to be some of the soldiers from Centipede that may or may not be Deathloks. Garrett, the original Deathlok, being reborn and ready to fight. Skye’s impending powers blooming (presumably). The final faceoff between the team and Garrett/Ward. And then there is the other Deathlok and what role he will play.

Hopefully it will set the show in motion for an overall better Season 2 since Season 1 has been so problematic.