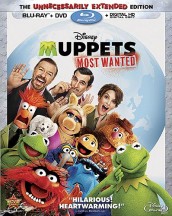 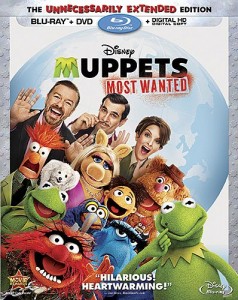 MUPPETS MOST WANTED – I appreciate that the creators of the MUPPETS are down to create something so incredibly different that it actually makes a franchise that has been around for more than three decades relevant again on the pop culture stage. Just look at the attention that the MUPPETS has received in anticipation for MOST WANTED. They were at San Diego Comic-Con, they have been in Entertainment Weekly, they have long been staple in the WWE and they have been making the talk circuit for months for this title. And it is because MUPPETS MOST WANTED is a damn fun movie. It takes everything that has come before it and brings a fresh take on the whole franchise as Kermit the Frog gets wrongly jailed because he looks like a European jewel thief. But things get that much crazier when the frog thief takes Kermit’s place in the Muppet’s world tour – only to use his new-found celebrity to rob key locations – and allows the characters on the show to do whatever they want in front of a live audience. It gets weird, it gets crazy and it is all in good fun in this great sequel to the 2011 movie that re-launched the characters to an entire new generation. 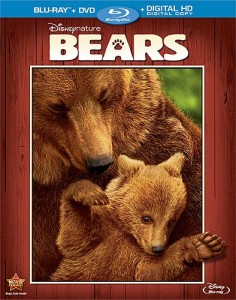 DISNEYNATURE: BEARS – Nothing makes you say “Awww” like these DisneyNature titles. Luckily this time no animal dies, which happened in the other two titles CHIMPANZEE and AFRICAN CATS. We get a happy ending and everything is all good. So for those that are concerned that it might scare your kids in some way, fear not. BEARS is a marvel in examining two newborn cubs and a mommy bear and how they interact with one another and how very different they are in a variety of ways. The cinematography is pretty awesome here and John C. Reilly continues to show his range as an actor – from doing a superb job in WRECK-IT RALPH to narrating this documentary. Through the time of their birth, we follow the family on a journey across multiple landscapes and throughout different seasons, which offer up some great backdrops for the documentary. The cubs are characters and really you begin to fall in love with them along the journey as we see how creatures act in nature like never before. Really good stuff for those with kids and looking for a great family film. 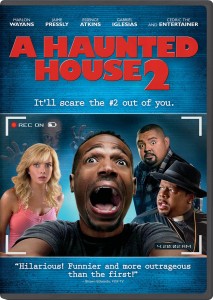 A HAUNTED HOUSE 2 – The first A HAUNTED HOUSE was a spoof on the PARANORMAL ACTIVITY craze as well as many horror related themes they could cram into an hour and half. It was alright but nothing special given there have been an endless amount of PARANORMAL ACTIVITY spoofs (look on Netflix). Part 2 is more of the same with Marlon Wayans reprising his role as Malcolm, this time with a new wife (Jaime Pressly), new children and a wise-cracking neighbor (Gabriel Iglesias). The puns are fast and the comedy is at times incredibly disturbing (see the sex scene between Wayans and the doll out of THE CONJURING or an epic slobberknocker between Wayans and a cock-fighting rooster). While it is predictable what is going to happen, there are still some really funny moments here that make this installment a step-up over the last one. But when there are so many horror spoofs out there, the entire genre seems a bit tired regardless of what is done. 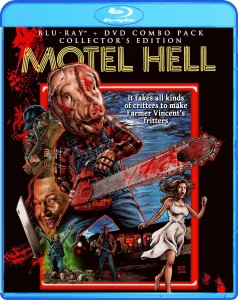 MOTEL HELL – Re-watching MOTEL HELL I totally forgot how f**ked up this movie is. A brother and sister duo have the best beef jerky across the land, just don’t ask about the ingredients. MOTEL HELL features some of the weirdest horror scenes in the genre perhaps ever. So the key to the jerky is obviously it is made of people. But not just people that are killed and butchered but instead they keep the humans in dirt and harvest them like plants when the time is right to make them into jerky. But, of course, at one point they get loose and turn into some sort of zombie human vegetables or some shit I can’t even explain because it is just that weird. Add to this some weird Stockholm syndrome relationship that goes one between the old man that is running the business who happened to kill the boyfriend of some chick and then takes her to his house where he ends up almost marrying the chick. It is a crazy one for sure but a classic that many fans have been hoping and praying would end up on Blu-ray. Luckily, Scream Factory continues to deliver the goods with bringing what fans want to high definition. 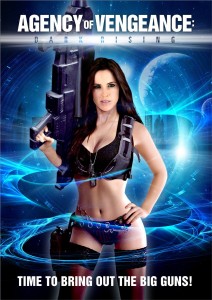 AGENCY OF VENGEANCE: DARK RISING – Gotta hand it to a cheesy action flick that knows it is a cheesy action flick and so it takes every liberty possible to exploit it. Even in the name, AGENCY OF VENGEANCE: DARK RISING, it is a tongue in cheek stab at the massive amount of action flicks that have come and gone over the years with a similarly convoluted and silly title. Now, DARK RISING is not a spoof, the story follows a group of Satan-loving people that are trying to conquer Earth because that’s what everyone always wants. Only the agency stands against them, specifically, Summer Vale (Brigitte Kingsley), a rarely all-clothed kick-ass hot chick who uses big guns and big blades to get the job done. She is literally a live-action Anime character. But there is always a twist and it happens to be something that apparently happened in a movie prior to this one – not sure which one as they aren’t really concerned with whether or not you saw it. Hilariously, DARK RISING falls prey to the same problems as other cheesy action flicks – trying to do too much with not enough plot. Sure, hot chicks with big guns is a good thing. Sure, making fun of yourself for being a movie that’s main concern is highlighting chicks with big guns is fine. But don’t try so hard next time. 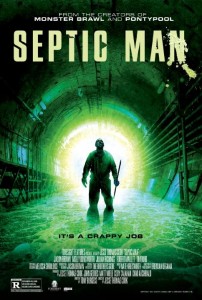 SEPTIC MAN – My AX colleague Abbie already reviewed this, but here are my two cents. SEPTIC MAN is not what you expect from the title or even the released opening scene of the movie that shows a woman literally shitting and vomiting to death. It is not the second coming of THE TOXIC AVENGER but it is very nauseating given the entire movie takes place in the bowels of a waste treatment plant where a trapped dude, played really good by Jason Brown, slowly has his flesh melt from the sheer amount of bacteria and nastiness going on. Why was he down there? Apparently, a stopped up waste tunnel – where two crazy bad guys had been dumping dead bodies – was causing a small town’s water supply to get poisoned and he was sent in under a dubious offer from a mystery guy to solve the problem. While not that gory or bloody, it still troubles the stomach with the sheer amount of gross stuff in the waste treatment plant. But SEPTIC MAN is more of a claustrophobic thriller than blood-filled serial killer flick. Currently, it is only on VOD but will probably make its way to home video shortly. 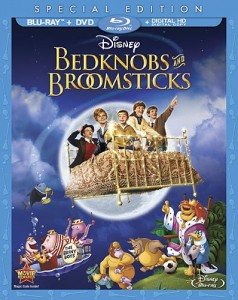 BEDNOBS & BROOMSTICKS – Loads of Disney titles out this week including BEARS and MUPPETS but there are also a slew of classic titles that are out this week including TARZAN, HERCULES, THE MUSKETEERS, THE ADVENTURES OF ICHABOD AND MR. TOAD and the one I will discuss, BEDNOBS & BROOMSTICKS. The before mentioned titles are fine and good and represent some classic Disney animation and seeing them for the first time in high definition is a definite treat for those that grew up watching the movies and for a new generation of kids. But BEDNOBS & BROOMSTICKS is one of those family movies that is always fun because it merges magic and music with a roaring good time. Some called it a MARY POPPINS rip off when it first debuted and that is definitely a legitimate opinion given the similarities, however, you can’t argue that BEDNOBS is darn fun for kids and now that it has been fully restored and offered in the first time in high definition it makes it a nice treat for a whole new generation to enjoy. 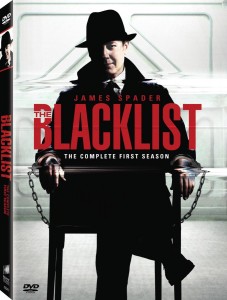 THE BLACKLIST: SEASON 1 – There’s an old saying about even the sun shining on a dog’s ass every so often. That’s what seems to have happened to NBC with THE BLACKLIST. The struggling network has done just about everything to try to recapture the glory of its old days, throwing series after series at the public in the hopes that something has caught. Much to their dismay, little does. However, the same can’t be said for THE BLACKLIST, a very good series about a syndicate crime boss that turns himself over to the FBI in order to catch even worse bad guys that have escaped the eye of the government and need to be brought to justice. James Spader does an excellent job as Raymond Reddington, who brings said Blacklist to the FBI, and is one part mystery and one part dangerous. You rarely see where the storyline is going until the end and it does a good job of keeping Reddington’s true purpose in the dark for a majority of the first season. But Reddington’s presence in the FBI has its own dangers and in one of the better arcs a former crime boss comes after him and decides to take out as many FBI agents as possible along the way. There is also a whole host of mystery regarding why he wants one agent to be his handler and what ties they have to each other that makes it that much more enjoyable. Worth checking out if you haven’t yet and just in time for the beginning of the second season.