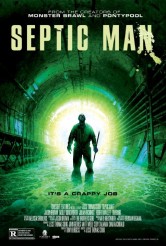 Not for the faint of heart, or the weak of stomach, SEPTIC MAN combines the horrors of serial killers, claustrophobia and psychological damage with a hefty continuing dose of physical filth. It is effective and remarkably sober, except for a derangedly cheerful country-style song over the end credits. There may be a couple of thematic similarities, but no one is going to confuse this with, say, THE TOXIC AVENGER.

In the small Canadian town of Collingworth, the water supply has become so toxic and people are getting so sick that the population has to be evacuated. However, sewage worker Jack (Jason David Brown) is persuaded to stay by Prosser (Julian Richings), who says he represents a “consortium” interested in stemming the source of the pollution. Jack has a history of fixing such ills, and if he’ll take on this problem, he will get quite a good payday (a briefcase with twenty thousand dollars is a down payment).

Despite the objections of his pregnant wife Shelley (Molly Dunsworth), Jack accepts the challenge, but he becomes trapped when he falls into a chamber within the sewage system. Making matters worse are the bodies that have been dumped there by a pair of psychotics (Robert Maillet, Tim Burd) and the effects of exposure to what’s down there.

Brown won a Best Actor award at the Austin Fantastic Fest, and it’s easy to understand why – we’re with Jack nearly all the time, and Brown never makes a false move. His determination turning to desperation is beautifully calibrated, just large enough for us to read what he’s thinking without ever going over the line. He also makes us see the man through the increasingly dense makeup as Jack’s skin deteriorates in the poisonous environment (again, this is not for the squeamish).

Director Jesse Thomas Cook and writer Tony Burgess have a strong grasp of grunge horror, the kind where the surroundings are so awful that we’re primed for all manner of dreadful things to occur. Cook also knows generally just how much to show us and when to cut away to serene landscapes outside, gorgeously lit by cinematographer Brendan Uegama.

There are some huge script holes, such as why there isn’t a whole crew sent into the tunnels at some point (if the consortium is trying to hide something, we never find out what it is) and how one man without any water purifying agents can be expected to single-handedly clean up the problem. There’s also the matter of Shelley, who falls into the category of annoyingly hysterical horror movie spouses. (Your husband is a sewage worker, wouldn’t you expect him to be called upon in this situation?)

SEPTIC MAN won’t be for all horror fans. While there are gory murders and dismemberments, it is quiet and deliberately paced. While it doesn’t go for gross-out jokes, it also has a great deal of, well, let’s say human byproducts. However, it has a true sense of horror, and those who seek such will find it here.