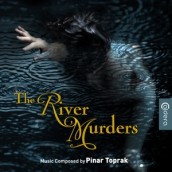 After their impressive initial releases of Guy Farley’s SECRET SHARER and Johan Soderqvist’s KING OF DEVIL’S ISLAND, Caldera Records continues to show excellent taste in finding subtle, yet powerful scores from composers of creative note – especially when it comes to their work for movies that might have flown under the radar. Now Pinar Toprak’s THE RIVER MURDERS sounds off with such tragic, heavenly resonance that you could easily have imagined this as the score for MYSTIC RIVER. But it’s a testament to her music’s melodic production value that you wouldn’t expect this score as belonging to a 2011 straight-to-DVD murder mystery about a cop whose lovers keep dropping dead. The detective’s conscience gets a gorgeous dose of Catholic guilt via this Turkish programming protégé of Hans Zimmer who’s steadily making her own, impressive way up the Hollywood ladder.

While THE RIVER MURDERS marks Toprak’s second CD release after her lyrical soundtrack to THE LIGHTKEEPERS (on Movie Score Media), the composer has actually been quite prolific in smaller film and TV features like BEHIND ENEMY LINES II and BREAKING POINT (with Dean Devlin’s big budget disaster movie GEOSTROM to come). The richly melodic quality that marks Toprak’s work is especially easy to hear in THE RIVER MURDERS, as she invests the score with one gorgeously tormented cue after the other. Mournful solos for the cello (played with haunting beauty by Tina Guo) and the piano are complemented by a superbly sampled orchestra. With lullaby bells to boot, Toprak’s thematic work begs comparison to such seminal Christopher Young scores as COPYCAT and JENNIFER 8 both playing feminine perspectives on body count suspense. However, Toprak’s point of view here is through Christian Slater’s FBI agent as he tries to unravel the professed innocence of Ray Liotta’s homicide detective as to the floating pile of past amours. Toprak has a skillful way of balancing these womens’ ghostly voices with a religioso sense of contrition, using creeping strings and outrightly violent musical action for outright horror score shocks. But whatever Toprak’s method of generating dread, THE RIVER MURDERS are certainly the work of killing the listener softly, and with an eerie reverence for its victims that a serial killer would admire.

Sex, carnal transgression and old time religion also play a heavy role in Toprak’s score to the 2007 drama SINNER, which pits an old-school priest against an upstart rival with a femme fatale in the middle. This equally beautiful score is a good companion piece to THE RIVER MURDERS, with Pinar again going for a string-driven approach that aches with mournfulness and more than a bit of lust. In addition to the CD’s well-designed booklet and always thoughtful liner notes by Gergely Hubai (a writer who really knows how to give upcoming composers their props), the soundtrack also offers Toprak in her own words in a seven-minute “audio commentary,” a nice bonus feature that many soundtracks could benefit from.

Click on the link to Purchase THE RIVER MURDERS soundtrack