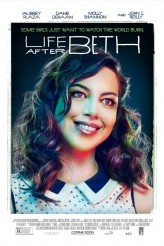 A rom-zom-com with a great cast, but not as many laughs as it should have

There are more of them out there, but for the purposes of this discussion, we’ll just name SHAUN OF THE DEAD, WARM BODIES and now LIFE AFTER BETH. It’s official – the zomromcom or romzomcom (i.e., romantic zombie comedy) is now its own subgenre.

LIFE AFTER BETH, written and directed by Jeff Baena, uses a new (or at least new-ish) zombie mythology as a metaphor for a relationship that’s going south. This might work better if the specific mythology of the film were more entrenched in the culture. On the one hand, the film is more actual original comedy than parody of conventions, and originality is a good thing. On the other hand, this approach to storytelling is going to leave a lot of viewers trying so hard to figure out what’s going on overall that there’s a good chance they’ll lose track of what’s in front of them. This problem is accentuated by the fact that the humor is amusing, but striving for hilarity – the jokes try too hard, and the somewhat muddy context doesn’t help.

Zach (Dane DeHaan), a young upper-middle-class suburbanite, is distraught over the accidental death of his girlfriend Beth (Aubrey Plaza). The fact that they were having relationship problems only makes it worse for him. Since his parents (Cheryl Hines, Paul Reiser) don’t know what to say and his community security guard older brother Kyle (Matthew Gray Gubler) is actively hostile, Zach begins hanging out with Beth’s grieving parents, Maury (John C. Reilly) and Geenie (Molly Shannon). Then, abruptly, Maury stops taking Zach’s calls. Going to see Maury, Zach catches a glimpse of Beth, and then won’t stop until Beth lets him into the house. She has no memory of dying, or being missing or anything after her hike. She also doesn’t remember any problems with Zach, so she’s delighted to see him again.

Maury explains privately to Zach that Beth doesn’t know she died and her parents have no intention of letting her find out or letting the neighbors see her.  But then Beth starts having serious fits of temper and shows of unusual strength – which she doesn’t remember either. And then other people start coming back.

There is no problem whatever with LIFE AFTER BETH omitting an explanation of why this is happening – most zombie films don’t pinpoint an origin to the plague. However, this film shies away from gore to the extent that a major character (permanent) death occurs off-screen; we’re told about it later. If you want to do a zombie comedy, and then take away the trappings of the genre without substituting something so amazing that we overlook what’s missing, you wind up with the kind of soft middle ground that’s presented here.

This said, filmmaker Baena has a firm grasp of the California gated community subculture he’s showing; a lot of the best laughs here have to do with keenly observed and just slightly exaggerated details of this specific social strata.

There are some very funny sequences and dialogue, especially when Reilly is involved. He gives Maury’s protective parent colliding senses of conviction and bafflement that make what’s going on across his face usually the high point of most of his scenes. Plaza is remarkable, throwing herself into Beth absolutely, reminiscent of a young Natalie Wood when she’s at her most joyous, and admirably fearless when she’s called upon to be extreme.

DeHaan does well enough by Zach, believable as he takes the protagonist from sad to stubborn to stunned, but the film sets him up to be too straight a straight man. We’re meant to see what’s happening through his eyes, but Zach’s reactions don’t generally make us either laugh or empathize, so he’s seldom allowed to take focus from the more colorful characters, even though he’s the lead.

LIFE AFTER BETH is well-made, has some good moments and is worth seeing for Reilly alone. It just doesn’t fully embrace its horror aspects, while still wanting to own them, and that comes across more as ambivalence than uniqueness.