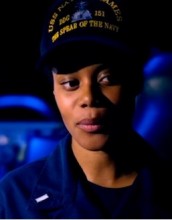 The actress talks playing a U.S. Navy lieutenant on the TNT series 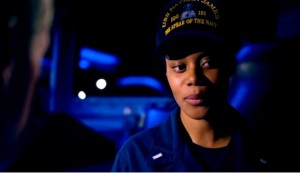 In TNT’s THE LAST SHIP from executive producer Michael Bay, Sundays at 9 PM, a worldwide epidemic has decimated the population. The captain, crew and scientists of the U.S. Navy destroyer Nathan James search the globe for a cure while fending off hostile individuals and nations.

Christina Elmore, who made her feature film debut in FRUITVALE STATION, plays Lt. Alisha Granderson. THE LAST SHIP is her first series regular gig. Elmore is in attendance at an event hosted by TNT for the Television Critics Association, where she talks about her work aboard THE LAST SHIP.

AX: Is this your first time playing a military person?

CHRISTINA ELMORE: I’m trying to think if I’ve done a play where I was in the military. No. This is actually my very first. But it’s pretty exciting to delve into that world, because while I have some family in it, I had never experienced it.

ELMORE: He was. He’s now out, but he lives still in San Diego, near his base. His job is very similar to the job that he did in the Navy, and all of his friends and roommates are either in the Navy or were, so there’s a whole world there.

AX: What is Lieutenant Granderson’s job on the ship?

AX: And who do you report to?

AX: At the end of the pilot, everybody’s still like –

AX: Yeah. As things progress, is Granderson with the captain, played by Eric Dane, who wants to stay the course, or is she with the first mate, played by Adam Baldwin, who advocates, “Let’s go home and check on our families”?

ELMORE: I think everyone’s of both worlds. I think I’m mostly, “Let’s stay the course, we have a job to do,” but at the same time, I have family and loved ones and friends back home. In the pilot, we hear about my girlfriend back home, who I don’t know if they’re safe, I don’t know what’s going on, and so I think we’re all a bit frazzled. We want to stay the course, but we don’t really know what the course is, so I think as we discover it, I think people have different reactions to what that means.

AX: The LAST SHIP cast and crew went out with a naval vessel out at sea for a few days. Was there anything surprising you learned during that?

ELMORE: I think being on the ship, what’s surprising to me is the level of commitment people have to their jobs. So we go to work every day, and we’re grateful for the job, we’re grateful for the income, we’re grateful for stability – we don’t have as much respect and commitment to the job that we do every day [as the Navy personnel do]. With a lot of Navy men and women, their job is very serious. Even if your job on the ship is to stock the vending machines, you take that seriously and you do it every day and you report back to your commanding officer. And I think that surprised me most – I thought there was going to be a lot more, “Oh, I hate doing this,” that there would be cynicism about it, but there wasn’t a lot of that. People were generally happy to be doing what they were doing.

AX: A lot of actors say that clothes play an important part in their performance. Does the uniform affect you at all?

ELMORE: It does. When you put it on, it doesn’t look anything like this [at the time of this interview, Elmore is wearing clothing appropriate to a cocktail party]. I’m wearing a jumpsuit most of the time that we’re on the ship, big dirty boots and a hat and undershirts, so it does. You get into the world and you sit up a little straighter, I would say that.

AX: Do you mind the fact that you’re wearing the same thing most of the time?

ELMORE: It is the absolute most comfortable costume I’ve ever worn. The boots are a little heavy, but this jumpsuit is made for being on the ship, day in and day out. So it looks good but it’s roomy – I can eat as much pizza as I like [laughs].

ELMORE: Not right now – this is pretty much my focus.

AX: Is there anything else you’d like to say about THE LAST SHIP right now?

ELMORE: I think what’s going to be exciting about it is that every week, it’ll feel like an event, but you’ll see an overwhelming arc that will really tie you in.