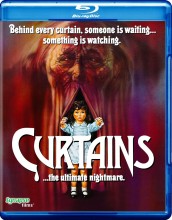 Jensen Farley was a film distributor in the early 1980s that specialized in exploitation films including a handful of forgotten sex comedies (JOYSTICKS), a children’s film (THE LAST UNICORN) and two cult horror films THE BOOGENS and CURTAINS.

CURTAINS is the most curious of the two because it’s lay dormant for years, never seeing a decent DVD or Blu-ray release. It also had a troubled production history, taking several years to make and a couple of directors taking a crack at the film resulting in original director Richard Ciupka removing his name (he’s credited as Jonathan Stryker, the name of a character in the actual film).

Surprisingly, for all the messiness and inconsistency of the film at times, CURTAINS remains an entertaining, creepy horror film that even when it misses the mark, still stands out as a memorable slasher film.

The story begins as film director Jonathan Stryker (John Vernon) commits his lover and leading lady Samantha Sherwood (Samantha Egger) to a mental institution so she can see what it truly is like to be insane. It’s preparation for a role in one of Stryker’s upcoming films AUDRA.

However, Stryker leaves her in the institution to rot. To add insult to injury, he holds a cattle call with actresses at his snowbound cabin to find a new leading lady. Sherwood shows up anyway (we assume she escaped from the institution) and starts to play mind games with Stryker and the other women.

Then, one by one, the women are murdered. Who is creating this last curtain call for them? It’s a whodunit, so the twist at the end is shoe-horned in, but still adds to the overall weirdness of the film.

What makes CURTAINS stand out is the creepy old lady mask the killer wears and the disturbing doll that appears throughout, usually before some of the women die. The ice skating sequence is what everyone remembers from this film and it still holds up quite well.

Still, there are some tonal shifts, no doubt due to the different directors who were trying to put their imprint on the film. The reshoots were to turn the film into a more conventional slasher film as opposed to the creepy suspense thriller Ciupka was going for.

To be honest, I think Ciupka was on to something special, and it’s a shame his full vision wasn’t fully realized. Still CURTAINS made money upon its release and gained cult notoriety over the years even though it never got a formal home video release.

Synapse has done a solid to the film by delivering an amazing transfer from the original Vault masters (and according to Synapse haven’t been touched for over 30 years). The film still looks fantastic. A rainy dream sequence at the beginning is stunning and the aforementioned ice skating death is masterful at times, particularly with the new crisp and clear images.

The special features includes a very forthcoming documentary featuring producer, writer and director Ciupka who is very honest as to what type of film he was trying to make and why he took his name off, a featurette on the make-up effects, a vintage documentary short, rare behind-the-scenes footage, audio commentary and the theatrical trailer.

For years I wondered what the real drama was by CURTAINS. When I saw it during its initial release, something felt wrong about the film, but I liked it regardless.

Now I’m happy that Synapse has restored the film to its awkward glory. From some ham-fisted dialogue and wholly different shooting styles, it still is quite surprisingly an entertaining film. Yet another forgotten gem of a horror movie from the 1980s, it’s nice to see it finally getting it’s due and if you love 1980s horror films and don’t remember this or haven’t seen it, it’s well worth adding to your collection.