Debuting a new, funnier version of Castiel and some very interesting developments 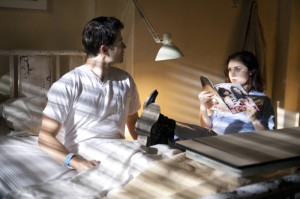 Since SUPERNATURAL staffer Ben Edlund is the creator of THE TICK and scripted some of the funniest episodes in modern dramatic series television (“Jaynestown” on FIREFLY and “Smile Time” on ANGEL), when he writes and directs an installment of something, it automatically merits watching. “Reading is Fundamental” isn’t an all-out laugh fest, but it has a ribbon of humor and wit running through it, along with a slightly different version of Castiel (Misha Collins) who is perhaps less useful but definitely more whimsical.

When Dean (Jensen Ackles) and Sam (Jared Padalecki) finally break open the chunk of clay they stole from top Leviathan Dick Roman, they find a stone tablet with indecipherable writing on it. Sam and Dean can’t contact Bobby for help with the translation, because his ghost is too weak after his fight with Dick Roman to manifest right now.

That’s not all that occurs – a chain of freak lightning storms is set off across theUnited States and every pregnant woman within a month of her delivery date gives birth that night.

On a more personal note, demon Meg (Rachel Miner), who has been posing as a nurse at the mental hospital where comatose Castiel is being held, phones to tell the boys that Cass woke during the storm and is still conscious in the morning. Dean and Sam head to the mental hospital.

What none of our characters know is that during the storms, sixteen-year-old advanced placement student Kevin Tran (Osric Chau) collapses during the storm, his eyes flashing gold and his sight filled with visions of the stone tablet. When he wakes in the morning, Kevin freaks that he’s missing his school test – but is then compelled to get into his mother’s car and drive.

At the mental hospital, Castiel actually seems happy. He’s glad to see Dean and Sam. He also likes Meg. He recognizes the writing on the tablet as that of the angel Metatron (yes, there’s a TRANSFORMERS joke about Megatron here), who took dictation from God. The stone tablet is literally the Word of God.

Castiel, however, can’t or won’t translate it. When he says he doesn’t like conflict and Sam and Dean continue to argue with Meg, Castiel drops the tablet, breaking it into three pieces. Castiel wants to play “Sorry” with Dean – not just figuratively, but the actual board game. Dean tries to get Castiel to focus, but Castiel, while he remembers what he’s done, is entranced by all creation.

Sam and Meg have an argument that carries them into the hallway. When they return to the room, the tablet pieces are gone. Sam chases after and catches Kevin, who has felt compelled to steal the pieces. Sam brings Kevin back inside. Kevin doesn’t know why, but he’s able to read the tablet.

The “why” is explained when angels Hester (Emily Holmes) and Inias (Adrian Glynn McMorran) arrive to protect the new prophet. Kevin protests that he doesn’t want to be a prophet – Dean agrees. He manages to temporarily banish the angels with the angel-smiting knife and the Winchesters, Meg and the freaked-out Kevin all hit the road together.

At a gas station, Meg encounters two demons. They follow her back to Rufus’ old cabin, where the boys are holed up. It seems as though Meg is going to sell out Castiel to Crowley, but when she ascertains the other two demons haven’t told anyone what they know yet, she kills them.

Castiel is able to confirm Meg’s version of the story (he knows there is demon blood on her blade). Meg tells Sam and Dean she needs a cause. Once it was Lucifer – now it’s Castiel and overthrowing King of Hell Crowley.

Kevin is able to read the tablet. Hester and Irias once again arrive to take the prophet to the desert for protection, but Hester is furious with Castiel for everything he’s done and equally furious with the Winchesters. She prepares to kill Sam, but Meg stabs Hester with the angel knife, killing her this time.

Two angels escort Kevin back to his Michigan home. The Winchesters now have his translation of the part of the tablet dealing with Leviathans – they can be killed with the bone of a righteous man doused in the blood of a fallen angel and two other entities. Castiel donates the angel blood, and says that somehow taking in Sam’s pain eventually cured him of the Lucifer torment. Now he doesn’t know what he’s going to do – he’s not a fighter any more.

Unfortunately, when Kevin arrives home, his angel guards are killed by the Leviathan Edgar (Benito Martinez), who has been posing as an FBI agent.

The end of “Reading is Fundamental” leaves us worrying about Kevin – we know that Dick Roman values unique humans, and Kevin has just become very unique, but he’s still a danger. Meanwhile, the boys now have at least the information (if not the physical tools) they need to kill Dick.

In other words, the episode fulfills the basic goal of advancing the seasonal arc, but it also satisfies the more immediate goal of being simply entertaining. We actually like Kevin – Chau knows how to go for the comedy in the situation without hitting it too hard and also proves good at swooning.

Meg may still have a doozy of a betrayal behind those occasionally all-black eyes, but either she’s playing an intriguingly long game, or else she really has shifted her loyalties to Castiel. Either way, Miner makes the sarcastic demon increasingly compelling to watch.

As for Collins, he seems to be enjoying this childlike, mostly cheerful iteration of Castiel, able to take delight in all creation, even if he finds it hard to stay focused.

The notion of an actual stone tablet as the Word of God may seem on the daring side, but only the section pertinent to Leviathans is translated, so no fundamentalists, atheists or anyone in between (or anyone of religions that don’t pertain to the Old and New Testaments) is given cause to take offense.

As writer and director, Edlund likes reactions, which here often serve as the punchlines, with dialogue as the set-up. As Dean tries to reach the Castiel he knew, Ackles is allowed full emotional range, from bewilderment to bemusement to raging frustration to enormous sorrow. Padalecki has a more straightforward job here – as Sam is ready to fully forgive Castiel and ask nothing more of him (after all, Castiel did get Lucifer out of Sam’s head), Padalecki is patient and empathetic.

“Reading is Fundamental” is a strong episode – and a fundamentally fun one.

Related Link: TV Review: SUPERNATURAL – Season 7 – “There Will Be Blood“