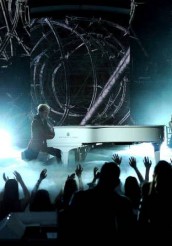 But the bottom three may be easily established

How do you find the strength to carry on when your friends leave on the world’s greatest karaoke competition, AMERICAN IDOL?

That was the sanctimonious and oddly-phrased question put before us at the beginning of this episode of IDOL. Wait a minute, this is a freaking reality show, right? Aren’t these fools competing against one another? Shouldn’t they be freaking damn happy it ain’t them? I know Elise Testone and Hollie Cavanaugh are thinking it despite how many tears are being shed. And are they actually being shed for poor mop-top DeAndre or the fact they narrowly escaped the boot?

Anyway, this week was songs from 2010 to the present. Finally, they give us some songs that actually are relevant, something sadly missing from the show up until this point. Here’s how the whole judging process has gone for the past 11 year IDOL has been on.

So let’s get to the reviews of the songs where they keep their friends close and their enemies closer.

Skylar Laine
Song: “Didn’t You Know How Much I Love You?” by Kellie Pickler
What I Thought: I loved Skylar’s home town. It is exactly the way I pictured it being. Deer head on the wall. Dudes missing a bunch of teeth. Car dealerships with the latest 1998 models. Old men talking about their gui-tar and giant billboards promoting her as the second coming. Perfect. All they needed was pictures of her with her chocolate banjo and ATV to make it complete. Hillbilly Hoedown went from the bottom to one of the front runners in one week but did she continue the momentum? I would say yes. I don’t feel she will be going home this week. While not nearly as strong as last week, it was solid and enough to keep her going forward.
What the Judges Thought: Randy called the song in her wheelhouse and feels she could have a hit with a song like that. Jennifer though it was a perfect way to start the show. Steven said something about crows.
Grade: B

Colton Dixon
Song: “Love the Way You Lie” by Skylar Grey
What I Thought: This was definitely a different approach for Colton and I think it paid off. While most people will recognize the song from the Eminem/Rihanna version, this was much more toned down and emotional. He said it was taking a risk and I think so as well but I think the risk paid off as it showed he can really capture that alt rock ballad perfectly. The strings were amazing as well and a great touch. This is the type of song I can really see making a huge splash today on the music scene. Hell, I might go buy it on iTunes. One of the best songs of the year from any performer.
What the Judges Thought: Jennifer said he had a signature style and makes everything his own. Steven loves his jacket and called him a rare talent saying it could record that song now. Randy also loved his jacket and loved the subtle performance and pulls himself into all the songs.
Grade: A

Jessica Sanchez
Song: “Stuttering” by Jazmine Sullivan
What I Thought: Can Jessica do any wrong in this competition or does she already have it locked up? Hard to argue with the fact she’s gotta be at the top of the pack when she gets ringing endorsements from just about everyone in the music business and from the judges. I can’t argue because she rocks it every week. This was a song I’d never heard before (which may be a problem) but she knocked it out of the park and made it compelling because she’s that damn good. I find it hard not to see her in the finals unless the tween voting bloc knocks her out.
What the Judges Thought: Randy said she set the bar high and called it superb to the highest degree. Jennifer called it beautiful and then said something about digging. Steven said he forgets where he is when she sings.
Grade: B+

Joshua Ledet
Song: “Runaway Baby” by Bruno Mars
What I Thought: Finally! I’ve been waiting for Joshua to actually do something other than gospel singing and ballads on this competition. He took a very upbeat song and showed he has the potential to actually do something fast and fun if he chooses. That said, I’m not sure if the audience will enjoy it as much as his other stuff. We’ve seen so much of his prior performances, this is like a complete 180 from those. That isn’t necessarily a bad thing but it didn’t give him a big chance to show off that great voice except once or twice. The judges loved it and gave him a standing ovation, I think he’s in trouble this week.
What the Judges Thought: Steven said he sold the song because his voice is awesome, then tried to hook him up with one of the dancers. Jennifer said he has great energy and can take control of the audience. Randy loved his look and vocals and he “has to have it.” Still unclear why they gave him a standing ovation.
Grade: B

Hollie Cavanaugh
Song: “Perfect” by Pink
What I Thought: This week will be interesting to see if the old adage of once in the bottom three always in the bottom until they are gone. Now this season has been odd in this regard because both Skylar and Elise have climbed out of the bottom already (Elise only to go back in) but Hollie has been in there two straight weeks. She’ll be back in there this week for sure and maybe gone from the show.
What the Judges Thought: Jennifer once again called her beautiful (which is her way of saying it sucked) and then said we’ll see how it all pans out (meaning pack your bags sister). Steven said it was not perfect but she looks good. Randy said it wasn’t perfect but a lot better than last week. Seacrest said it was better than last week – thanks for weighing in douchebag.
Grade: C

Phillip Phillips
Song: “Give a Little More” by Maroon 5
What I Thought: Another one I’ve been railing against for the past few weeks is the monotony that is Phillip Phillips. All of his songs sound the same regardless of genre, time period or tempo. Unlike Joshua, however, I think this mix up from his normal fare worked exactly as it should have. He took it up a notch while still giving the fans some of the same Phillip they have grown to enjoy. This is what I have been hoping to see from him for the past few weeks and I think it paid off in spades in terms of showing just what he can do on stage.
What the Judges Thought: Steven said he is evolving quickly as an artist. Jennifer said it was underwhelming from what they have seen from him before. OK, what the hell is she talking about, this was exactly the opposite of what we have seen from him in the past few weeks. Randy agreed saying it was not his best performance. Wow, can we even trust the judges that give standing ovations to Joshua but then blast Phillip?
Grade: B+

Elise Testone
Song: “You and I” by Lady Gaga
What I Thought: Elise has probably been the most inconsistent performer on the show in a long time. One week she freaking nails it and is unstoppable. The next week she blows it. Weird. While I think she took some time to get rolling on this one, after she hit the chorus she floored it and delivered what we have been seeing from her (occasionally). While it won’t climb her from the cellar, it is a good start to maybe getting back above there (if she can).
What the Judges Thought: Randy said Elise is back and was a perfect song for her. Jennifer called her a closer. Steven said she took a song and turned it into genius.
Grade: B

So who will be in the bottom this week? Hollie for sure. I think Elise will be there too although she doesn’t deserve to be there. And I think Joshua goes into the bottom. Hollie goes home.