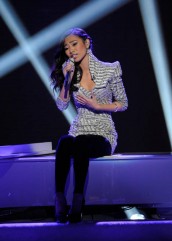 Elise Testone and Joshua Ledet also in the bottom three 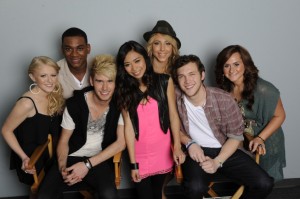 Decision time and would we have a shocker on the world’s greatest karaoke competition, AMERICAN IDOL?

Well, by now you know that in some mind boggling voting process Jessica Sanchez got the least amount of votes. However, the judges saved her from elimination to sing again. Elise Testone and Joshua Ledet were also in the bottom three.

OK, before we move on just a bit on the comments from Jimmy Iovine. I love this part of the show. It is by far the best part of any of the show that IDOL puts out. Why? Because he’s the most honest person on the show. He tells it as it really is and doesn’t play favorites. You did good, he says it. You sucked, he says it. A simple formula but works great. Also, he frequently doesn’t understand where the judges are coming from which I always never understand their love for a crap performance. On a show where the judges frequently just gush over the singers, he’s a breath of fresh air. I hope they keep it and even make him a judge or just the only judge because he’s seriously the best thing going.

As usual, I’ll spare you the major fluff that the show provides in order to stretch this results show into a painful hour including a really bad group performance, an even worse Ford commercial, a performance from James Durbin (which was actually not bad), a performance from Jennifer Hudson, Ne-Yo and Rick Ross, a breakdown of interesting Tweets (did I mention stretching?) and a grumpy Steven Tyler and feather jewelry.

First up was Hollie Cavanaugh and Jessica Sanchez. Instead of the results, Seacrest plays the whole separating the contestants into groups.

Secondly, Phillip Phillips and Elise Testone were called on stage. Phillip joins Hollie on stage while Elise joins Jessica. Obviously, anyone that is next to Jessica has to be feeling good.

Hillbilly Hoedown, Skylar Laine, is left and she is safe. Also safe is Hollie, Phillip and Colton. Yep, a shocker is coming (maybe), meaning Elise, Joshua and Jessica are in the bottom three. OK, I predicted that Elise and Joshua would be in the bottom but Jessica? No freaking way. How anyone couldn’t keep her around is amazing to me. Especially over Hollie who is so far less of a good singer than she is.

Joshua is then told he is safe. Elise is safe and the “WTF” moment happens with Jessica Sanchez garnering the LEAST amount of votes. Of course, the judges save her, meaning two will be eliminated next week.

OK, not to toot my own horn here. But I freaking predicted this about four weeks ago. I said a few times in fact that Jessica is a great singer but I could see her getting “shockingly” eliminated much the same way that Pia Toscano from Season 10 was eliminated last year. Either the people voting for her didn’t do it because they thought she was safe, or they all voted for someone else one week, or the whole thing is rigged for publicity, I thought Jessica would be the one to get this treatment.

Prior contestants that have been saved by the judges haven’t lasted that much longer on the show going maybe one or two weeks longer before getting the boot. However, none of them probably have the talent Jessica has. So we’ll see what happens in the weeks to come.