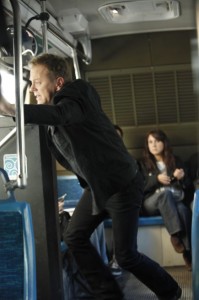 One of the realities of TOUCH is that there’s generally a lot going on as the story paths weave and interchange. “Entanglement” may be this episode’s title, but it could just as easily have been the series title, as well. Martin Bohm (Kiefer Sutherland), who lost his wife when the World Trade Center came down during the 9/11 attacks, is trying to raise his autistic son Jake (David Mazouz) who can’t speak.

The trick is that Jake “sees” and apparently “feels” things in numeric patterns that seem to result in all sorts of things working out for people on a global basis – kind of like a benevolent form of chaos theory (you know, the butterfly in the Amazon triggering a series of events that result in a storm in New England). So Jake communicates in series of numbers that Martin has to interpret so that he can start the chain of good things going.

Martin, however, has to prove to the state that he’s an able father, or they will institutionalize Jake – which is where Cleo Hopkins (Gugu Mbatha-Raw) comes in. She’s a social worker with the center that now has Jake in its care. She knows that there’s something special about Jake, but has to find a way to make it real to the skeptics and bureaucrats. They do have help in Dr. Arthur Teller (Danny Glover), a professor who specializes in kids with gifts like Jake’s, except that Teller is considered on the fringe by his colleagues.

The series, created by Tim Kring (who also came up with HEROES)  takes the inter-connectedness and heightened human gifts themes from that late, but loved, series and puts a whole new positive spin on them. Where HEROES was dark and cynical, TOUCH is utterly uplifting, but not in a namby-pamby everything’s sunshine and roses kind of way. It remembers that life has some pretty nasty thorns to get around.

In tonight’s episode, Jake’s number communications take a turn for a pattern of concentric circles that somehow connect up to the number 22. There’s a good-hearted ne’er-do-well who lifts a man’s wallet then returns it when he sees a photo of the man’s daughter. There’s a teen-age Saudi Arabian girl, Norah (Emily Ghamrawi) who when she finds out that her father has betrothed her to another man’s son, dresses in boy’s clothes and goes joy riding with her girl friend (also dressed as a boy – it’s against Saudi law for women to drive). And there’s a young doctor in Montreal who is mooning over a young woman he sees every day on the train, but can’t get up the courage to speak to.

The thief steals Martin’s laptop as Martin is trying to get to Jake’s evaluation session. Naturally, Martin gives chase and lands on a bus, where his central conflict begins. Next to him is a young Salvadoran (at least, I think she’s from San Salvador – things move really quickly in this show and it’s really hard to catch things like names and places) woman who has a gun, which she immediately turns on Martin. Actually, she’s out to kill the former soldier who killed her parents and took her brother away. But since Martin is now onto her, she can’t let him go and Martin misses the evaluation session.

The Saudi girls pick up a pregnant woman out in the desert who is trying to get to the hospital because that baby is coming. The thief gives the laptop to his daughter for her birthday, although the girl is pretty clear that she’s going to find another family’s vacation photos on it. And Arthur swings by the hospital to check in with a nurse there, only it turns out she’s his daughter and very worried that her dad is going off the deep end again regarding Jake. And the doctor in Montreal is asked to stay late to try to find a bone marrow donor for a young boy whose parents adopted him from South America.

While the thief may not be able to keep it together, he does love his daughter and arranges a dragon parade for her (they’re of Chinese extraction), and the firecrackers cause the girl’s stepfather to step in front of the bus where Martin and the Salvadoran and her target are riding. In the resulting chaos, Martin gets the Salvadoran and her target off the bus, stands between the two and gets her to not shoot. She runs off and gets hit by a car (there’s a lot of that in this series). Martin also sees the tattoo on the chest of the former soldier – Exodus 22:22, something about not harming widows and orphans because if you do, God will hear, exact wording depending on which Bible translation you use. Turns out the soldier was supposed to kill the baby brother, but instead turned him over for adoption. So when Martin goes to the hospital to check on the Salvadoran, sure enough on the computer screen is the concentric circle pattern and it’s a request for a bone marrow donor match, and sure enough, the Salvadoran is connected back to her little brother.

Of course, the donor match does keep the Montreal doctor just late enough. He thinks he’s missed the object of his affection, but it turns out, she was late, too, and he’s on hand just in time. The Saudi girls deliver the woman’s baby, then Norah’s dad shows up, decidedly angry. But Norah points out that he’s the one who taught he to be so independent, which means he needs to set up a meeting with the man whose son betrothed Norah to. Only that works out because the son, well, he’s actually this doctor in Montreal who went and got married to this girl he met on the subway.

In any other show, these kinds of coincidences would get the writers laughed off the screen. In this show, they’re the point and it’s a lot of fun to see how the different pieces in each episode come together. There’s a larger story here, too, in Martin’s attempts to bring his son home. There’s also a box that his wife’s sister has sent him. Abigail’s name has already sent Jake on a freak out, so we have to wonder what that’s about. And Martin did miss the evaluation that would have made things a lot better since about the only person Jake responds to is Martin.

And speaking of Jake – you have to give Mazouz a lot of credit. Aside from the narration at the beginning and end of every episode, he has to do all his acting without a word or even expression. Making that kind of blankness real is no mean trick and to see such a young actor pull it off is pretty impressive.