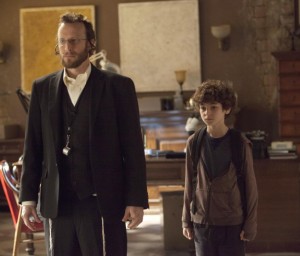 In TOUCH, the series created by Tim King which has its first-season two-hour finale tonight on Fox, Kiefer Sutherland (who is also one of the show’s producers, plays Martin Baum, the father of eleven-year-old Jake (David Mazouz), an extraordinarily gifted child who does not speak and cannot bear to be touched. However, Jake sees crucial connections between seemingly unrelated events.

Most actors get roles and then research their characters. In a serendipitous twist that echoes the themes of inevitable outcomes arising from apparent random happenstance, actor Bodhi Elfman researched his character before he even knew the series TOUCH existed, much less was cast in his role of Avram, an Orthodox Jew who believes in Jake’s special abilities.

BODHI ELFMAN: It was one of those fortuitous things that happened. I had been going to New York a lot with my wife [actress Jenna Elfman], who was working on a TV show called DAMAGES, and I was watching a lot of the Hasidic Jews out there just walking the streets, and there’s obviously a lot of them in Los Angeles as well, but in New York, it’s such a culture. I’m Jewish, and I’ve always been fascinated in how sort of insular they are, yet they’re integrated into the community. And one of the things that I thought was fascinating was that whenever I’ve seen Hasidic Jews on TV, they’re always kind of pot-bellied, crusty gray-haired, with donut crumbs on their jackets, and I thought, “When I see them in life, they’re these kids, or young adults, or middle-aged guys, and they’re much cooler than they’re played on TV, and what a cool character that would be to have a guy who was a Hasidic Jew, and integrated in the world, and knew about the Kabbalah and studied it and yet was still young and in shape and ascetic.” I just thought that would be a great character, so I was working on this guy, sort of as a backdoor character, didn’t know where I’d put him, and then the part came my way, and that was that. So sometimes that kind of stuff just happens.

AX: Given what TOUCH is all about, did you feel there was a degree of resonance in you getting the part?

ELFMAN: Yeah. And I think Tim [Kring] did as well. And then I arrived on the set on my first day, and the first [assistant director] is fromMinsk, the same town in Russia that my grandfather is from. So there was the first a.d., who sounded and looked like my grandfather, who I loved very much, and Tim just thought the whole thing was pretty splendid

AX: Did you use anything observations of your grandfather in constructing the character?

ELFMAN: There’s a certain cadence to the speech. It’s broken up a bit, in that when they talk, it kind of comes in waves. And then it stops. And then it comes again. And that’s sort of how Avram talks, and that’s something that I got from talking to a lot of Hasidic Jews and rabbis that I’ve been working on as this character, and then my family, a little bit. But mainly from rabbis.

AX: Do you tell rabbis, when you talk to them, that you’re researching a part?

ELFMAN: Absolutely. I wouldn’t want to betray their trust. I say straight out that I’m researching a part and I want to sit in [on the discussions]. And they’re very giving and it’s very fine with them. And one thing I do say, which is true, is, “The purpose of this is not to put anything in a bad [light] or misrepresentation. It’s to honor it.” When I tell them that, they’re fine. “Come on in, come on over.”

AX: What’s it like doing scenes with David Mazouz as Jake? Because Jake as a character doesn’t speak or make eye contact, you can’t really play off him in the way you would interact with most other characters.

ELFMAN: Can I tell you how easy it is? If you watch “Music of the Spheres,” the first episode my character is in, it’s so easy, he’s such a great kid and he’s such a great actor, he’s got such an inner life in him. If you didn’t have to talk, you could just do everything through your acting, that would make my day, but he does it, and if you watch the episode, you’ll see that we have a connection, he and I. And [the character Jake] doesn’t let anyone touch him, ever, and in the episode, he hands me something and places it in my hand, and then I affectionately give him a little nod on his hair, and it shows that there is some connection, and Avram has some sort of understanding of what Jake is. But I find it really easy to work with him, even though we’re not in an interactive dialogue.

AX: And how is Kiefer Sutherland to work with?

ELFMAN: He’s a real pro. He really knows his business. I’ve done TV now for twenty-one years, I’ve probably done almost sixty TV shows, and I came to the [TOUCH] set and it was like a clinic [in terms of efficiency]. He understands the set, he breaks down the scenes, the cameras, the angles, how to do it. He has a lot of ideas. I love it, because he always has a good idea, like, “Oh, you know what would be really cool? Try that.” Or, “What about this?” And the writing is fantastic, Tim’s work is amazing, and Kiefer and him sort of just get into a great groove on the set, so I thought it was great. [Sutherland] also is always there. For any off-camera work, whether he’s on camera or not, it doesn’t matter how long he’s been on the set, it doesn’t matter. If you have your time for your close-ups, he’s there for you [saying his lines off-camera] the entire time. He’s a really generous guy.

AX: TOUCH was already airing before Avram was introduced. Did you know what TOUCH was when you auditioned for it?

AX: So had you been watching it recreationally, just as a viewer?

ELFMAN: Yes. I was stoked, because it was what I call a “goosebump show” – where you watch it, you get goosebumps. And there are not a lot of shows like that. But I was kind of more thinking about the part. This character was bubbling up underneath me, so that just worked out perfectly.

AX: Most actors, when they research characters that there isn’t an immediate application for, are sometimes thinking about writing them. Are you also a writer?

ELFMAN: I’ve made my living as an actor for twenty-one years. That’s really what I’m good at. I don’t know if I’m a good writer. I imagine every actor is a writer to some degree. I don’t know if I’m good or not. You look at someone like Larry David [creator and star of CURB YOUR ENTHUSIASM] and I bow to them. So I probably will be involved in writing in some way, but I still feel, in that area, I have a lot to learn, to stand next to these kings and learn from them.

AX: Now, your acting career and your marriage seem to have begun at about the same time. Was that a coincidence or was there a causal effect in there somewhere?

ELFMAN: We both were really young, she had to be home every night by eleven PM. I was already acting and was doing TV shows and film, just starting out, and she was a dancer, a ballerina. So she was doing lots of commercials with her beautiful face and her beautiful body, but she didn’t have an agent and wasn’t doing any other theatrical work. So I helped her get that [started], but then she took off very fast.

AX: A number of your family members are in show business – your uncle Danny is a very famous composer. Did you always know you wanted to be an actor, or did you ever think, “Maybe I’ll be a fireman?”

ELFMAN: No, acting – I think it’s one of those things where I think it’s probably the only thing I’m really good at. Maybe that – and marriage [laughs].

AX: Do you kids want to be actors?

ELFMAN: It’s a weird universe. You work on it, and it happens. Any actor can tell you that. You work on these characters, you stick them in your back pocket and sure enough, there’s a way these guys find themselves around. If it doesn’t happen, then I suppose you can create it. You’ll hear stories about actors all the time – they’ve been working on something and then all of a sudden, they’re in some great off-Broadway one-man show about that character. So I think it goes both ways. But I think that actors shouldn’t just wait for parts. They should be creating things all the time.

AX: Are you working on anything else right now besides TOUCH?

ELFMAN: Yeah. Jenna and I are developing a project about marriage together, that’s a pretty far-out and funny take on marriage, just in that we’re a relatively young couple in an old marriage. We’ve been together twenty-one years, so we definitely have something to say about the subject. It’s a single-camera comedy. We feel there’s something funny to be said about being together twenty-one years.

AX: Do you know if Avram will come back next season on TOUCH?

ELFMAN: I think it could happen. Of course, it would be really arrogant for me to say that, but I can say, in talking with Tim, Avram’s journey doesn’t seem like it should end there, but there are so many things that would need to factor in if that’s the case. When you see the season finale, you’ll see why, but all I can say is that the season does end with my character alive and not dead in an alley [laughs], so I do exist, I have things I can still offer, and I guess we’ll just have to see what happens.

AX: Is there anything else you’d like to say about TOUCH?