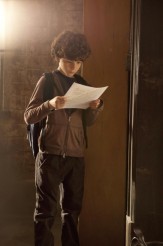 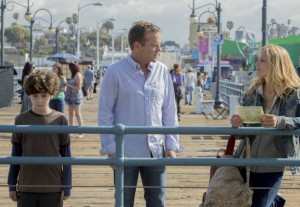 TOUCH creator/writer/producer Tim Kring has a fundamental attraction to storylines about things that bring people together. In Kring’s HEROES, which ran for four seasons on NBC, people from all over the world discovered they had different abilities that caused them to seek one another out and join forces.

In Fox’s TOUCH, which has its first-season finale tonight, young Jake Bohm, played by David Mazouz, has the ability to see hidden patterns and probabilities that are unknown to most people. Jake’s father Martin, played by Kiefer Sutherland (a producer on the series), tries to follow the clues given him by his silent child, but other parts of the patterns unfold all over the globe.

ASSIGNMENT X: HEROES had very complex storylines, as does TOUCH …

TIM KRING: Well, [TOUCH is] very different in that, each week, you introduce different characters, and those characters will then go away [unlike the ones on HEROES, who often became parts of ongoing arcs] And so you don’t have to focus on those characters ever again. That’s the difference – we’re not asking audiences to retain the knowledge of a character from Episode Two and then carry it into Episode Eight. If that character comes back, you will never have needed to have seen how that character was introduced. It will be introduced in some new story, or somebody else’s story. So [TOUCH is] not a big continuing series – it doesn’t require that dedication from the audience to know the prior episodes.

AX: When did you come up with the idea for TOUCH?

KRING: Well, I think it was percolating for a long time. I wrote an episode of CROSSING JORDAN that I just looked at recently, and the seeds of this show were absolutely in that. So I was thinking about it as far back as – that was 2004, I think. So it’s been a recurring idea. On HEROES, I was very interested in the theme of interconnectivity and it was something that was one of the things that was most interesting to me about HEROES, so when I sort of thought about what I’d like to do next, I thought about elevating that idea to the forefront, as opposed to putting it slightly in the back. 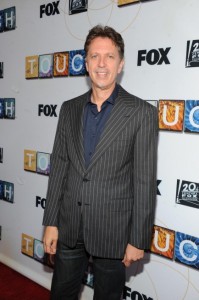 KRING: I literally can’t say enough about Kevin. It was a script that I think a challenging script for a network to want to do. And I actually frankly didn’t think we would do it at a network. I thought if it got done, it would be done someplace [like cable]. And Kevin read it and believed in it instantly and has been absolutely the tireless champion from within the company and I’m hugely indebted to him. Kevin actually was there when we did HEROES and then left very quickly afterward the show was picked up. And so we knew one another. And Kevin, I think, connects to material in a very deep way. And what I liked about it was that it kind of wasn’t articulated between us. He just called me and said, “I want to make this and I want this to be a big show for us.”

AX: With all of the different storylines that have to come together in an organic way by the end of an episode of TOUCH, how did you find the people for your writers’ room? Did you make do something like solve a Rubik’s Cube before hiring them?

KRING: What my producing partner Carol Barbee and I look for, what we talked a lot about, was wanting to find writers who were burning to write short stories, who loved to create characters, who wanted to have a unique voice. What I would love is for these episodes to feel connected to the writer in a way that [they did not] on a serialized show like HEROES. [On HEROES], I think we very successfully had a seamless quality from one episode to the other, so that you weren’t quite sure who the writer was, there was never really a distinct, “Oh, that was a So-and-So episode.” It felt very much like they were all of a piece, because the stories were very connected to one another. This, I think, we’re really aspiring to try [make episodes so] hopefully an audience will know, “That’s a Carol Barbee episode, that’s a Tim Kring episode,” because we’d like to ]be] an hour [where] the writer to almost be a short story writer in this.

AX: How involved is Kiefer Sutherland in the production process?

KRING: Kiefer is hugely collaborative. When you make a pilot with somebody of his caliber and somebody of his talent and his intellect and his ability to analyze a character, it was hugely valuable for [producer/pilot director] Francis Lawrence and I to have him as a true collaborative partner in this, and so scenes were literally designed around how we collaborated and how we created them together. So his part ends and mine begins and Francis – it all sort of blurred. It was very interconnected.

AX: I know during HEROES, the cast was very involved with doing charity events for causes that involved autism. Did any of that awareness of autism at any point come into your creation of TOUCH?

KRING: The autism question is a complicated one, and I realized I was backing closer and closer into that as I was creating the [Jake] character. But it was never the intent to start from that point and say, “This is a show about an autistic kid.” It was very important for us to state early on that, for this child, there was a misdiagnosis. There was something else [not autism] going on, there was something supernatural or spiritual or mystical that was happening with this child. Maybe [he is] “chosen” or “gifted,” but to the rest of the world, he presents that way because he is locked in and internal.

AX: Are there a number of how many different story elements that each episode should have?

KRING: It varies a little bit, but two is not a connection, or two can’t be a surprising connection. You need at least three elements in order for you to go, “Oh, I didn’t see that coming.” If there were only two of them, then you saw it. But we are definitely continuing this idea of interlocking stories in a global fashion, so every week, we’ll have a handful of them.

AX: Do you think TOUCH might inspire people to want to help one another out, the way the characters often do on the show?

KRING: At worst, it’s an entertainment piece, but where I hope it will go is that the stories that we tell, the fact that we are a bit of an anthology show, means that we can tell different stories each week, that we can start showcasing things that need people’s attention and call attention to things, to causes that we feel we can generate help for. And who knows? I think it’s the mere fact that the theme of it is about how these small stories are actually connected is ultimately an uplifting and provocative idea, and I was very interested in not just telling big stories, but telling small stories. It’s the opposite of what a lot of shows are doing. This is a story about a man trying to find his phone, or a boy trying to find an oven for his family. These are not earth-shattering premises. But the stakes are very high to the people involved, and because of that, you care about it.