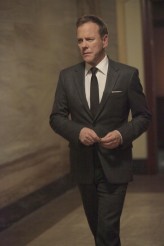 Jack plays poker, a blogger shouts out for love and Jake's aunt is up to something.

One of the toughest challenges the writers of TOUCH must have is making sure all the different story lines intersect organically while all we viewers have to do is keep track of them. In “Noosphere Rising” the connections aren’t quite as clear, but here goes.

On the main story front, Martin Baum (Kiefer Sutherland) is trying to make sense of Arthur Teller’s (Danny Glover) death, as is Clea (Gugu Mbatha-Raw). While going over the surveillance video of the mysterious Room Six, she spots a blank space in the recording and then sees Teller give Jake (David Mazouz) something, which turns out to be a key which sends Martin off in search of Teller’s research.

He’s going to cross paths with math professor Logan Coteweiller (Eyal Podell) who’s been playing poker with the numerical sequence that Teller gave him, which has also broken him up with the love of his life – Stacey (Angela Gots), the dealer who got nailed when the house suspected she and the professor were in cahoots.

Also dealing with issues is Devon (Sean McGowan), whose father has just passed. An Australian who just wants to sell his father’s land – which he perceives as being worthless – and get out. The catch is, Dad has left the land to his horse and unless Devon can ride the horse, that’s how things will stand.

Then there’s Natalie (Amelia Rose Blaire), a video blogger who found a flash drive with a love note on it from a love-sick Italian boy named Paolo. He’s sent his video note to Celeste, only it appears Celeste never got the drive. So Natalie calls on her blog fans to help her find Celeste before her birthday, when she is supposed to meet up with Paolo in New York at the Kismet Cafe.

But wait, there’s more. Martin’s sister-in-law Abigail (Catherine Dent) is filing to take full custody of Jake. She gives Jake a new prototype tablet computer with all sorts of games on it, so Jake can speak. Yeah, like that’s going to work. Jake instead goes right to the solitaire game that has this week’s numbers on it 1188, or aces and eights – the dead man’s hand. Wild Bill Hickock reportedly was holding the two-pair when he was killed way back in 1876.

Which leads us back to the poker game. Martins spots a bill, Logan (heart) Stacey that has the young dealer all upset. Turns out the night Logan won big, Stacey got nailed for his winnings. And she hasn’t heard from him since. So Martin manages to track Logan down only to find him unconscious behind his desk. While calling for help, he find Logan’s phone and calls the last number he dialed – which just happens to be Devon’s phone. Devon is a dirty mess trying to ride the horse and is sobbing and about to give up when the call comes. Devon is able to tell Martin that Logan is a diabetic and points him to Logan’s insulin, thus saving Logan’s life.

Which gives Devon the strength of purpose and calm to get on the horse and start riding.

All the while, Martin and Abigail are having it out. As Abigail leave, she tells Clea that she can protect Jake. In other words, we’re getting the sense that there is some sort of conspiracy afoot. Teller clearly saw a girl in a wheelchair and is now dead. Abigail has just offered the institution where they’re holding Jake a major donation. Hmmmm.

Natalie’s blog, for her part, has really resonated and while neither Celeste nor Paolo have turned up yet, loads of folks are supporting her. So Natalie says everyone should meet at the Kismet Cafe – all wearing red hats and/or scarves – to support the cause of love. Because Natalie really believes in love. Two things – the Happy Pop Twins, Izumi (Satumi Okuno) and Miyoko (May Miyata) make a brief appearance telling Natalie that she’s right to believe in love. And the magical travelling phone pops up with a message from Celeste, who apparently left a video on the phone along with everyone else. Clue or just a running thread?

After reviving Logan, he and Martin play one last game to get the money back to pay off Stacey’s bosses. Turns out Logan stopped contacting Stacey because he’d been banned by the club and was afraid he’d get her into more trouble. Logan tells Martin how to play the system, but Martin at the last minute plays the aces and eights and while Logan would have won the hand, Martin still comes out ahead.

Devon realizes that there is value in the property and hands it over to his father’s ranch hand. Logan and Martin turn over the money to Stacey at the Kismet Cafe (oh, right, like you didn’t see that one coming) and leave just as everyone is beginning to show up for the big romantic reunion. Celeste doesn’t show, but Paolo is glad – he’s there for Natalie and True Love prevails once more. Martin finds Arthur’s office and Clea, looking at the surveillance video, sees the girl in the wheelchair.

With all this craziness, you have to wonder if even show creator Tim Kring knows where he’s going with all this. In the meantime, it’s still a fun ride, with some real joy thrown in. There’s plenty of dramatic conflict, but the idea is that the world is essentially a good place – and that’s not a bad thing.