Home » Movie Review: THE CABIN IN THE WOODS 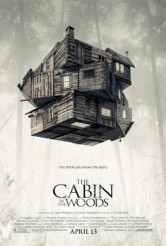 ©2012 Lionsgate
THE CABIN IN THE WOODS poster
Reviews

Movie Review: THE CABIN IN THE WOODS

A wonderful horror film that is intelligent, funny and liable to provoke big arm-waving arguments

The first thing that should be said about THE CABIN IN THE WOODS is that it is an awesome movie. Unfortunately, the next thing that must be said is that discussing specifics about what makes it so awesome is liable to dampen the experience for those seeing it for the first time. The good news is that it holds up just great on a second viewing, with answers to questions that may occur the first time around hiding in plain sight in the details.

As the poster tagline says, you think you know the story. Five college kids take off together for what is supposed to be an enjoyable, relaxing weekend at an isolated cabin in the woods. Bad things happen. However, and this is a big however, there is much more going on here than meets the eye, and even the trailers don’t totally give things away.

In making the leads smart, kind, likable people who aren’t culturally tone-deaf, THE CABIN IN THE WOODS harks back to John Landis’ AN AMERICAN WEREWOLF IN LONDON. We really don’t want terrible things to happen to these kids – this is a rare instance where if the movie did just turn out to be spending a weekend as these folks joked, flirted, smoked weed and contemplated whatever, we’d probably still have a good time. Obviously, that’s not where CABIN goes. Still, Kristen Connolly as sweet, friendly Dana, Anna Hutchison as Dana’s free-spirited best pal Jules, Chris Hemsworth (who has since become famous as the lead in THOR) as Jules’ devoted boyfriend Curt, Jesse Williams (now on GREY’S ANATOMY) as Curt’s brainy, decent classmate Holden and Fran Kranz as watchful stoner Marty are all excellent company.

As for Richard Jenkins and Bradley Whitford as the corporate middle management types we meet in the film’s opening scenes, they play off each other as though they really have been working together for who knows how long. Everything they do is pitch-perfect.

The dialogue has the spark and surprise that is associated with writer Joss Whedon, who wrote the script with the film’s director Drew Goddard. It’s witty without being self-conscious or sounding like those other college kids Whedon spent some time writing about.

The look of CABIN is exquisitely creepy and intricate, with some scenes having so many elements that a DVD frame search seems in order when such a thing is possible. It should also be noted that things eventually become as bloody as all get-out and that the description of the film as a “horror comedy” is very misleading. It’s a horror film with a strong sense of humor, and that’s not the same thing.

There is a great breadth of narrative invention at work here, as well as a lot of thoughtfulness about quite a few subjects. CABIN effectively looks at the horror genre without ever even tapping on, much less breaking, the fourth wall. The shocks here are not limited to suddenly-appearing dangers, but also to what we think should happen. There may never have been another film that ends the way CABIN does, which provoked a lengthy three-way discussion among critics afterwards at the screening attended by this reviewer. There are also few films that have so much to say and yet say it so entertainingly and even lovingly.

Related Article: Exclusive Interview with THE CABIN IN THE WOODS and DOLLHOUSE star Fran Kranz – Part 1

Related Article: Exclusive Interview with THE CABIN IN THE WOODS and DOLLHOUSE star Fran Kranz on MUCH ADO ABOUT NOTHING and DEATH OF A SALESMAN – Part 2