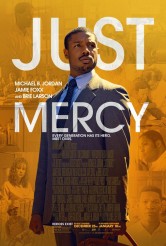 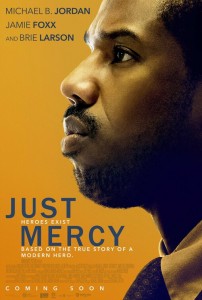 JUST MERCY opens in 1987 Monroeville, Alabama (where, all of the white locals continually point out, Harper Lee wrote TO KILL A MOCKINGBIRD). Walter McMillian (Jamie Foxx), known to all his friends as Johnny D, is a cheerful family man with his own pulping business. One night, he is pulled over and arrested for the crime of murder. Walter is black, the victim was a white teenage girl, and we are in a small town in the Deep South in the ‘80s. The system is rigged against Walter from the outset.

At the same time this is happening, Bryan Stevenson (Michael B. Jordan) is studying law at Harvard. Even before graduation, Bryan displays zeal for helping people who’ve received poor legal representation. When he gets his degree, Bryan moves to Alabama, over the objections of his mother. She has understandable fears about what can happen in Alabama to a black man and/or anyone trying to defend convicts, let alone someone who is both.

Bryan acquires a like-minded associate, Eva Ansley (Brie Larson), and together they set up the non-profit, government-funded Equal Justice Initiative. (Eva’s husband Doug, played by Dominic Bogart, is supportive.) Bryan takes on a number of cases, including Walter’s.

Walter’s case is, sadly, all too believable as a miscarriage of justice. The eyewitness testimony against Walter, provided by a white convict (Tim Blake Nelson), is borderline nonsensical. Dozens of people, none of them called to the stand, can testify that Walter was with them at a community event at the time of the murder. With these facts on his side, Brian is both optimistic and determined. However …

Director Destin Daniel Cretton and his co-screenwriter Andrew Lanham clearly have passion in their hearts and a lot on their minds. They are opposed to the death penalty both because innocent people can be executed, and because they feel that even the guilty should not be reduced to their very worst actions.

The case in JUST MERCY, featured in real life on 60 MINUTES, has such shocking actions on the part of law enforcement and the courts that it’s not hard to feel outrage. The more we learn, the more horrified and furious we are on behalf of both Walter, who has been targeted for reasons of racism, and Bryan, who is being thwarted at every turn perhaps because he’s black, and definitely because the people in charge don’t like being embarrassed. 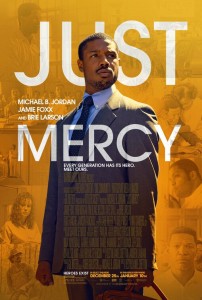 The acting is top quality, with Jordan showing eloquent restraint and Foxx maintaining Walter’s human decency in horrible circumstances. Larson doesn’t get much to do, but does it well. Nelson is a standout as the shady perjurer, and Rob Morgan and O’Shea Jackson Jr. are memorable as two of Walter’s fellow convicts.

But in their eagerness to make sure we get the point that racism and prejudice against the poor in general can often taint legal cases, Cretton & Langham sometimes employ on-the-nose dialogue. The actors deliver their lines with sincerity, but sometimes it doesn’t sound quite right.

Also, some scenes seem to be there because the template calls for them, not because JUST MERCY needs them. The first meeting between Bryan and Walter is not promising. Walter feels that, because his previous lawyer bailed, Bryan won’t do anything, and even if he wants to, he can’t. Nobody has ever gotten off death row in Alabama.

While this last piece of information is relevant to the story, the rest of the scene plays as sort of movie-meet-cute. We know beyond a doubt (reasonable or otherwise) that Bryan is going to represent Walter; there wouldn’t be a movie otherwise. There’s no need for JUST MERCY to play coy on that score.

It’s possible to wholly support JUST MERCY’s sentiments and still question some of its filmmaking tactics. Still, the fact-based story it tells (Stevenson, McMillian, Ansley and others are all real people) is intriguing. As a well-performed courtroom drama, it fills the holiday bill.