The actress talks her character arc over three seasons 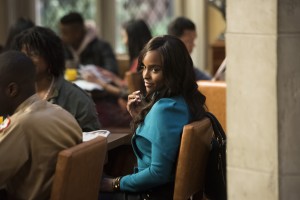 Based on the film of the same title, Netflix’s DEAR WHITE PEOPLE concerns a group of students, who go back and forth between being friends and frenemies (with some romance in the mix) at the fictional Winchester University. The characters deal with racism, sexism, classism, and homophobia, between one another and in broadcasts from the college radio show, which is also called “Dear White People.” DEAR WHITE PEOPLE is currently streaming its first three seasons on Netflix, with a fourth and final season set for 2020.

Antoinette Robertson plays Colandrea “Coco” Conners, who, over the three seasons, has gone from desperately wanting to be a sorority sister to being a lot more aware of her own values, rather than those imposed on her. Coco is best friends, but also frequently in conflict, with “Dear White People” host Samantha White (Logan Browning).

Robertson, whose other credits include HART OF DIXIE and THE HAVES AND HAVE NOTS, talks about Coco’s changes through the course of DEAR WHITE PEOPLE.

ANTOINETTE ROBERTSON: I feel like Coco is still dealing with identity issues right now [in Season 3]. I feel like we see her freshman year for the first time in Season 1, and she’s vying for the attention and the praise of a sorority. And then she realizes she doesn’t need their attention to be who she really wants to be. I feel like originally we saw her trying to be something for everyone but herself. She tried to be the ideal girl for Troy [a college dean’s son, played by Brandon P. Bell], she tried to be the ideal girl to be in a sorority, and now we see her coming into her own, and doing things that she wants to do for herself. So that’s the evolution that we’re seeing. I feel like she’s always been outspoken, but now it’s a little different. I think it’s next-level. She’s choosing herself, as you can see in this season. It’s more about what she wants, and not what people want from her. 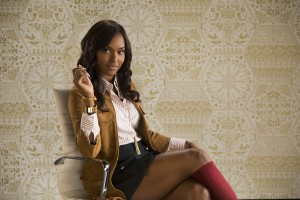 ROBERTSON: I don’t think she’s seeking approval anymore. I think in some spaces, it’s necessary to have the approval of people who might be in a more authoritative position. But I feel like she’s realized that she’s more than enough, and she doesn’t need to conform to the confines of society.

AX: And what would you most like people to know about Season 3 of DEAR WHITE PEOPLE?

ROBERTSON: That growth is a process, and sometimes it happens to us in life [in a way] that we might not necessarily unpack right away, but slowly we start to see things manifest themselves in our lives, and we have to take the time to learn from them before we can fully grow and heal.