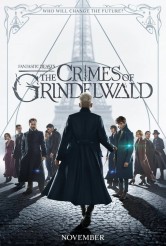 A gorgeous if slightly slow return to the Wizarding World 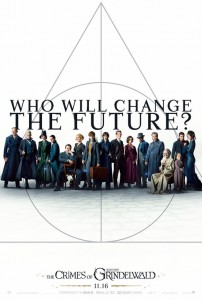 For those who missed the first FANTASTIC BEASTS film, GRINDELWALD provides us with a bit of catch-up. Newt Scamander (Eddie Redmayne), the socially awkward but deeply decent magical beast zoologist, is now prohibited from leaving England after his adventures in New York last time around. This is even though Newt was instrumental in the capture of the dark wizard Gellert Grindelwald (Johnny Depp), who is currently in the custody of the Ministry of Magic. As we may surmise, Grindelwald doesn’t remain in captivity for very long. Even though the last thing Newt wants to do is play magical policeman, he is drawn into the quest for Grindelwald, who has some very big plans.

Also important to the plot is Credence Barebone (Ezra Miller), an anguished young man we met in the earlier film who is trying to learn his parentage. Ministry of Magic employee (and Newt’s crush) Tina Goldstein (Katherine Waterston), her free-spirited mind-reading sister Goldie (Alison Sudol) and Goldie’s non-magical boyfriend Jacob Kowalski (Dan Fogler) are also back for their second go-rounds.

Since FANTASTIC BEASTS: THE CRIMES OF GRINDELWALD is scripted by HARRY POTTER/WIZARDING WORLD creator J.K. Rowling, and directed by WIZARDING WORLD veteran David Yates, it’s understandable that they expect the audience to appreciate the significance of this franchise’s conventions, locations and names. Most of the locations are pretty thrilling and gorgeous, whether we have seen them before or not, and there’s one familiar place that should put a smile on fans’ faces. The film does try to remind us of certain issues, like what Nifflers do, and has a lot of fun with the beasts of the title. On the other hand, if you don’t remember what Aurors are, or where young English witches and wizards go to school, you’re going to have to figure it out from the context.

The intricacies of the back stories of Credence and some other characters get to be a bit much. We care about the survival and freedom of Newt and his friends, but there are so many people and agendas to follow, sometimes with no clear goal, that we can’t properly invest in many of them. What would likely be intriguing subplots in a novel play out as distractions, although they are never less than visually sumptuous.

Something to appreciate is that Grindelwald, far more than Voldemort of the HARRY POTTER films, has something actually compelling in his pitch. We understand he’s a monster, and not a sympathetic one, but he’s made to be surprisingly on point when it comes to some aspects of his concerns. This provides an unexpected level of complexity to the story’s ethical framework. 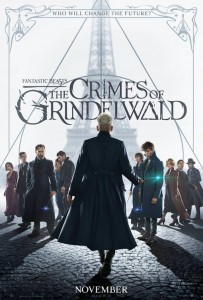 Depp shows commendable restraint. Redmayne makes Newt more than ever someone who follows his own path, and Callum Turner is an excellent casting choice as Newt’s brother – the two actors look like they could be related. Waterston displays backbone and Sudol as in the earlier film seems like she could have stepped out of the Roaring ‘20s. Fogler has less to do here than before, but he remains a likable touchstone. Miller and Zoe Kravitz both have strong handles on their respective lost souls and Claudia Kim is striking as a character whose destiny some fans will recognize on hearing her name.

FANTASTIC BEASTS: THE CRIMES OF GRINDELWALD isn’t as well-constructed in narrative terms as we might like. Still, it brings us back to old friends and new wonders, and on the whole, it’s worthwhile.