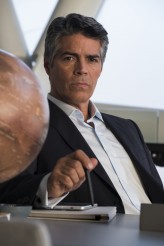 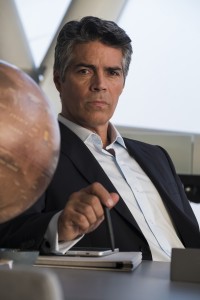 National Geographic Channel’s series MARS has been described as a hybrid. Now in its second season on Monday nights, MARS employs both scripted drama and documentary footage to explore how what is happening in the real world today could be mirrored when humanity attempts to colonize a new planet.

Dee Johnson is the Season 2 show runner and an executive producer on MARS. Esai Morales (who coincidentally portrayed another Earth-originated dweller of another planet as a series regular on CAPRICA) plays wealthy industrialist Roland St. John, whose company clashes with the scientists already in residence on Mars. Both Johnson and Morales are new as of this season. They sit down together to talk about their work on the unusual show.

ASSIGNMENT X: How do you feel about the way MARS combines news footage, documentary footage, and scripted drama?

DEE JOHNSON: The hybrid thing is really an amazingly complicated and challenging show to do. Because I come from scripted, obviously, I’m going to work really hard to make the scripted a priority for me. But the documentary part of it, which was what was intriguing to me when I looked at Season 1, we worked really closely with our partners to synch it up and have that storytelling bring another layer to the drama, in support of not only of the characters’ motivations, but also anchoring the show in a kind of reality that makes it seem credible, so it’s not science fiction, it’s science-we’re-almost-there.

AX: Do the people working on the documentary side come to you and say, “These are the clips we have, try to integrate them,” or do you write the scripts and say to them, “Do you have things that illustrate this?”

JOHNSON: When I began Season 2, I wasn’t involved in Season 1, I’m not sure what their process was there, but when we were arcing the season for the characters on the scripted side, we had the documentary team sit in the room with us, and we worked out the themes that we were going to explore, and tried to figure out where potentially things could synch into the script. So we really partnered with them early on, and we shot at the same time. So when we were shooting in Budapest, they were shooting all over the world, getting all the documentary footage. And then we tried to blend it together seamlessly as best we could.

AX: Were either of you surprised by how contemporary a lot of the issues in MARS are, as far as science versus business? In the first episode of Season 2, it seems like the conflict between the oil companies and scientists in the Arctic in real life are a very close parallel to the situation on MARS …

JOHNSON: Isn’t it crazy? It makes sense that all the same things that we’re struggling with here on Earth are of course going to come into play if and when we get to Mars. But it is kind of weirdly prescient that a lot of this stuff, especially today, with the announcement of the discovery of water on the planet [Mars], which is a huge dramatic thing that we’re working with in Season 2, between these two colonies, and the hunt for liquid water on Mars. So, great timing. 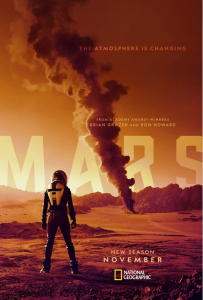 MORALES: Yes, what she said. [laughs] I was intrigued, but I wasn’t surprised, because of the whole concept of the show, from my seeing first season, is what is possible, and projecting [from there]. So that was great. What is surprising is that we now have a president who is a business leader, leading the way, which has got to eventually color this show at some point. I mean, we don’t talk about that, but it’s interesting – someone asked me yesterday, and I didn’t have the answer right away, did I learn something? I thought, “I’ve been in this business four decades, what could I learn on a show?” And it hit me afterwards. I learned how easy it was for me to absorb the justifications and motivations of my character. If you are someone with limitless, or at least extreme resources, and ability, and ego, drilling on Mars is a no-brainer. First of all, we’re the first to be there, so our impact is going to be minimal, or so I’m assuming. I just realized how many arguments came naturally to me to offset all the concerns of the scientists. So that was kind of scary, because I still position myself, even in this setting, right now, talking about the show, I was coming up with justification after justification.

JOHNSON: Well, when we were arcing out the season, we didn’t necessarily want it to be good versus evil. It’s complicated, right? And it is a relationship, science and industry. The question is the balance. His company, and who he represents – he’s definitely aggressive, but the intention is to, in their minds, it’s planning for the mass migration of humans to Mars, and they’re basically going to provide the infrastructure that would be necessary in a world where you have a mass migration. So it’s not in and of itself wrong, but it’s the way you do it, the aggressiveness with which you do it, versus the scientists within our fictitious world who are saying, “Let’s understand the planet a little bit better before we start going to town on it.”

MORALES: Absolutely. And I find the irony of it, with the fracking today, and all the massive increases in earthquakes where there never were before, and how people ignore that fact. In the show, we have certain situations that represent that, and it’s just, how should I say, my character sees even the creation of pollution and the negative byproducts as potential opportunity for another market. “Now we have waste management.” Some folks will never admit that what they’re doing might be bad, or wrong, because they’ll always find another angle from which to exploit it.

AX: Did you in any way write the Roland St. John role for an Esai Morales type, or …?

JOHNSON: I don’t know if I had an Esai Morales type in mind, but actually, I did have him in mind, so I guess that’s [speaking to Morales] your type. And also just sort of a different type of a person to be the head of a corporation and to have this kind of drive. This guy had to be both charming and really, deeply aggressive. It’s not like I knew that about him personally, but I knew he could act it [laughs].

AX: For either of you, was the hybrid structure an appeal to coming onto the project, or were you more attracted by telling a story of Mars?

JOHNSON: I think it was both. It was unique in the landscape. I hadn’t seen anything like it. And I thought, when I watched it, “There’s a way to use that [documentary] part of the show to really bring another layer to the storytelling.” And I thought, “This could be fun to try, and I think it could be really effective,” and grounded, as we were saying earlier, in a kind of reality that makes it not just science fiction. We didn’t do anything that isn’t really possible, and within a short amount of time possible. So it was challenging, super-challenging. It’s like childbirth, now I forget how painful it was [laughs]. But it was really fun at the end of the day, and I feel really proud to have worked on something that is so unique on the landscape.

MORALES: I’m grateful to work on anything in this modern day and age that helps people, or inspires people, to think.

AX: What would you both most like people to know about MARS Season 2?

JOHNSON: I think that what you [Morales] said, which is, it really allows us to think, and think about not only what could happen on Mars, but what we’re currently dealing with now.

MORALES: Very much. By projecting [imagining] ourselves into outer space, we can somehow give ourselves the distance to look at our current situation more objectively, and say, “Well, look what they’re doing there.” Then eventually we can, maybe, evolve what we’re doing here-here.”Look what they’re doing there,” meaning on MARS, hopefully, we’ll have an edifying experience, or at least something that increases our wisdom, something that will improve the way we treat ourselves, our industry and our appetites.