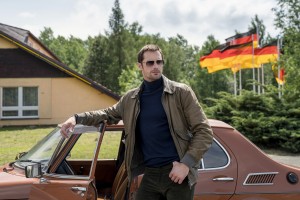 AMC’s THE LITTLE DRUMMER GIRL, adapted from John Le Carre’s novel of the same name, is a thriller concerning identities and loyalties. The miniseries, directed by Park Chan-wook, runs over three consecutive nights, Monday-Wednesday, November 19-21. In THE LITTLE DRUMMER GIRL, West End actress Charlie (Florence Pugh) agrees to go undercover for the Israeli intelligence agency Mossad. Charlie’s job is to pretend to be a Palestinian sympathizer and embed herself with a group of putative terrorists. However, as she goes deeper into the assignment, Charlie isn’t sure who’s right and who’s wrong and, for that matter, whether she’s being told the truth by her handler Becker, who is played by Alexander Skarsgard.

Standing on the stage in main ballroom at the Beverly Hills Hotel, Skarsgard talks informally with a small group of journalists about THE LITTLE DRUMMER GIRL, winning awards, his continuing love for Eric Northman, and more.

ASSIGNMENT X: Any thoughts about being back in this room?

ALEXANDER SKARSGARD: It feels good to be back on this stage. This is the Globes room. This is where it happened.

AX: Have the awards made any difference in the types of projects you’re being offered?

SKARSGARD: Yeah. I think it opened some doors. You have access to more and sometimes better-quality scripts and filmmakers, and so, to get those accolades can definitely help in that regard.

AX: With THE LITTLE DRUMMER GIRL, were you a fan of the espionage genre overall?

SKARSGARD: I had not read this novel, but I was very much a fan of the genre, and I believe THE SPY WHO CAME IN FROM THE COLD [by John Le Carre] was the first spy novel I ever read. It was my dad’s [actor Stellan Skarsgard] favorite spy novel, so he introduced me to that when I was a teenager. I hadn’t done anything similar to this, and I don’t know if you’ve read the novel, but it’s an incredibly exciting character to play, that kind of duality of him, and the role-play and the back and forth. It’s psychologically very, very interesting to explore.

AX: Do you have a favorite spy movie?

SKARSGARD: Well, it sounds like I’m pandering – this is John Le Carre – but because my dad loved THE SPY WHO CAME IN FROM THE COLD, that was my introduction to the literature of spy novels, but also, the movie was the one that my dad loved, and I would watch it as a kid with him, so that was my favorite. And then SPIES LIKE US.

AX: On THE LITTLE DRUMMER GIRL, does the director tell you, “Okay, this is what Becker is really feeling now,” does he leave that up to you …?

SKARSGARD: We would have long, in-depth conversations about the general path that the character was taking, and we would obviously check in a lot of where we were in the story. We started in London, so we started shooting the last three episodes before we had the beginning, so there were a lot of conversations about that, but in terms of the psychology of it, and the mind-play, Director Park left it kind of up to me to decide when I felt that I was Becker, and when I was Michel, and how genuine it was, and how vulnerable he was.

AX: Do you have a different working relationship with director Park Chan-wook than you do with most directors? It seems that everyone on THE LITTLE DRUMMER GIRL refers to him as “Director Park.” Actors and producers are usually a little more informal with their directors …

SKARSGARD: I know. When I heard that, before I met him, everyone kept referring to him as “Director Park,” and I was like, “Oh, is he going to be some douchebag full of himself, all pretentious?” He’s the most low-key, humble, sweet guy. I don’t know where that came from, and it’s not like he insists on it, but that’s what people call him, so that’s what we started calling him. Everyone calls him that. But it’s not because he’s full of himself, or thinks he’s better than anyone. He’s an incredibly humble man.

AX: Do you have any preference between working on location or on a soundstage?

SKARSGARD: Well, when you’re up at the Acropolis shooting [as the LITTLE DRUMMER GIRL did for a scene between Skarsgard and Pugh], you do not miss the soundstage [laughs]. We were up there, just us, alone, as the sun was setting over Athens, and then we shot there all night, ‘til the sun came up. It’s one of those nights – or it’s not one of those nights, it’s the night, where you’re like, “We will never experience anything like this …” You can’t shoot at a more extraordinary location on the face of the Earth. It was stunning.

AX: Did you do any research into real-world spycraft for THE LITTLE DRUMMER GIRL?

SKARSGARD: I watched some documentaries on [the Israeli intelligence agency] Mossad, one called GATEKEEPERS, which is very interesting, because it shows the complexity of what they were doing, and also how they’re obviously individuals, and how they’re dealing with the consequences of it. It was important that it’s not a homogenous group, that even within our unit here, with Michael [Shannon, who plays Becker’s boss Kurtz] and myself and the other Mossad agents, it was important to create some friction within the group, to blur the line between good and bad, and what they believe, and what cause they’re fighting for. So that was very helpful, to watch that, and a couple of narrative features that I watched about the region, and one called WALTZ WITH BASHIR, an animated film. It’s about in Beirut. It’s not about Mossad, but it’s about Israeli soldiers, but that just gave me an idea, because Becker is definitely struggling morally with what he’s doing, and what he believes in, and that was very informative for me, to watch that one.

AX: Do you see any similarities in Charlie’s situation in the story with what happened in reality to Patty Hearst?

SKARSGARD: Like the Stockholm Syndrome? It’s a similar subject, isn’t it, where you make it difficult for the protagonist, when you start to associate and sympathize with the other side, and you don’t really know what you’re fighting for any more, what side you’re on. So yeah. 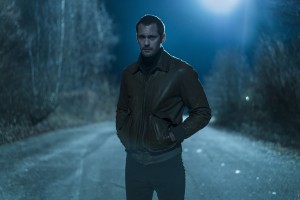 AX: Did you do anything physical to prepare for playing Becker?

SKARSGARD: I had to dye my beard. That was the only thing [laughs].

AX: How did you work on your accent for this?

SKARSGARD: He’s a bit of an enigma, this character, so I wanted it [ambiguous]. It’s even stated in the book that Kurtz, Michael Shannon’s character, has a more strong Israeli accent. Becker, when you first hear him, you don’t know where he’s from, you can’t really place him. He was born and raised in Israel, spent some time in New York, and currently lives in Berlin, so I wanted a slight accent. I didn’t want it to be too American, but definitely more subtle than Kurtz’s accent.

AX: Would you ever want to do a role for seven years again?

AX: Do you miss Eric at all?

SKARSGARD: So I’m quite enjoying the freedom of controlling my own schedule. For seven years, when I read something I loved, I was always nervous. And I’m not complaining – TRUE BLOOD was the greatest gig ever, but I was always nervous. If I read a script that I loved, I was always like, “Ooh, I hope they can fit it into the five-month hiatus that we get.” And many times, it wouldn’t work. They would push the movie, and it would shoot at the same time as TRUE BLOOD, and I couldn’t do it. So I’m still loving the fact that I can take time off when I want, I can work whenever I want. That said, yeah, I miss Eric. He was pure joy to play.

AX: Several years after TRUE BLOOD went off the air, people are still making .gifs and memes of Eric. Do you have any feelings about those?

SKARSGARD: [laughs] Well, I don’t know. I’m not very active on social media, so I don’t see it. But it’s flattering. Of course, when you care so deeply about a character, and spend seven years with this guy, and I loved playing him, the fact that there are people out there that give a damn, and that actually care about the character and remember him, it means a lot. So it’s not like I’m like, “Oh, I don’t care, it’s the past.” It’s still a huge part of my life. So it’s incredibly flattering.

AX: A lot of the roles you’ve played have a dark edge to them, including Becker in THE LITTLE DRUMMER GIRL. Do you seek out those kinds of roles, is that what’s getting offered to you, are you doing lighter characters that we’re not aware of? Tarzan was arguably a lighter character, but he still had a lot of anger and a tragic back story …

SKARSGARD: I think that I’m drawn towards maybe darkness and conflicted characters, because I think that inner struggle is always quite fun to play, and characters that might be presented one way, and then you discover a different side is always quite fun. But that said, after I did quite a few dark projects last year, played dark characters, it’s quite nice to do something lighter as well. So I might need a slapstick comedy now or something.

AX: Of your darkest characters, who was the most fun dark character to play? Becker may not be quite as dark as Eric in TRUE BLOOD or Perry in BIG LITTLE LIES …

SKARSGARD: Oh, God. Sophie’s Choice here. How do you compare Eric Northman to Perry? Eric was obviously seven years of my life. We’ve actually been back [at the studio] called The Lot, it’s on one side of Santa Monica [Boulevard], where we shot Season 2 to 7 of TRUE BLOOD. We’ve been back there for BIG LITTLE LIES, and it was way more nostalgic and emotional than I thought it would be to be back, same little fitting room where we did all the TRUE BLOOD fittings, and because it’s HBO and the same producer, we have a lot of the same crew members, so it’s been quite an emotional journey. Eric is always special to me. But Perry’s probably one of the best characters, one of the most well-written characters, with so much depth that I’ve ever gotten to play. And I did a movie last year called HOLD THE DARK, and that’s also a very disturbing character. I had a great time shooting that.