Home » Supernatural review About a Boy 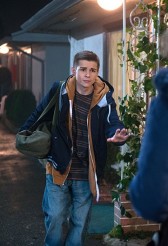 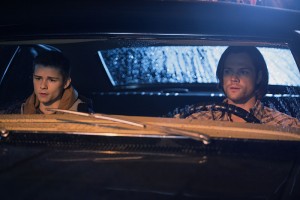 There may be another show out there that could combine movies like BIG and 16 AGAIN with the Hansel & Gretel legend, but SUPERNATURAL is the one that actually does it. The result, “About a Boy,” is entertaining and amusing, although it doesn’t give itself enough time to play with its premise.

When people in a small Oregon town start vanishing in a flash of light and leaving their clothes behind, Sam (Jared Padalecki) has to convince Dean (Jensen Ackles) to leave the bunker. Previously allergic to research, Dean has hunkered down trying to find a cure for the Mark of Cain.

When Sam goes off to investigate the background of the most recent victim, an alcoholic named JP (Jason Wingham), Dean strikes up a conversation with attractive bar patron Tina (Kehli O’Byrne). The little information the brothers have suggests witchcraft is involved. When Tina leaves, Dean sees a flash of light, goes to investigate – and vanishes in another flash of light himself.

When Dean (now played by Dylan Everett) wakes up, he’s in a crude basement prison – and he’s fourteen years old. Tina (now played by Madeleine Arthur) is trapped here, also returned to puberty, as is JP (Braydon Brown). JP is removed from the room by a scary-looking man (Mark Acheson), who leaves cake for Dean and Tina. Although Dean doesn’t want to leave Tina alone, she convinces him that the best course is for him to escape, get help and return.

Dean arrives at the hotel room door. Sam’s silent reaction when he comprehends what’s happened is some of the best, funniest acting Padalecki has ever done. While Dean is appalled by what returning to adolescence has done to him – he has no body hair, isn’t allowed to drink alcohol and is sexually aroused by Taylor Swift songs – there is one upside: the Mark is gone. Even so, Dean and Sam agree that Tina must be rescued and the witch (Lesley Nicol) stopped.

This isn’t just any witch, but the witch from Hansel and Gretel. Her scary-looking henchman confesses that he is Hansel. He claims that the witch made him eat his sister’s heart and promises to help the Winchesters so that he can get revenge, but then Hansel turns on them and the witch says she never made Hansel do anything. If one reads the IMDB credits, evidently the witch is meant to be Gretel, but this isn’t made clear by simply viewing the show.

So why is the child-eating witch turning adults into teens instead of just grabbing actual kids? Turns out that today’s law enforcement is much more stringent about searching for missing children than it was a few centuries back. The witch’s solution is to turn adults whom no one will miss into children, then fatten them up and eat them. She’s just visiting from Europe, though – she says that the Grand Coven has sent her to kill Rowena. The Winchesters know Rowena is bad news, though they don’t know (yet) that she’s Crowley’s mom.

Dean prevails, destroying the hex bag, the witch and Hansel all at the same time. He then returns to his usual self. Tina, however, was out of range and is still a teen. However, she sees this as a change for a new start in life.

Unfortunately for Dean, the Mark of Cain is back on his arm. However, he is, for now, a little more upbeat, glad to be able to once more drive and drink (we hope not at the same time).

The notion of Dean rediscovering the world – his specific world – from a youthful point of view has a lot of possibilities. Then again, regular Dean’s mind is still in the teen body and, at least as written, there seem to be some limits in how many aspects of life are impacted by the throes of puberty without that age’s relative innocence. An extension of the premise would also require a corresponding absence of key player Ackles, though the dialogue for the juvenile Dean is perfectly in tone.

The notion of famous mythical heroine Gretel as wicked witch is great, or would be if this could be easily discerned from watching the episode. It’s entirely possible on first hearing to interpret her line about Hansel being a willing accomplice as meaning that they killed Gretel together. The performances in this section are so campy that we don’t have an instant’s fear that anything bad will go down; it’s not fatal, but a little more creepiness might have made this a lot punchier.

Dean’s fears about the Mark are rooted in actual events. Consequently, his worries engender sympathy (rather than the exasperation raised by sulking) and Sam’s efforts to comfort him feel like solid brotherly affection. The resolution for Tina works well enough, and Sam and Dean turning their attention to the Grand Coven portends a whole new arc.

“About a Boy” isn’t topnotch, but it’s entertaining and agreeable.