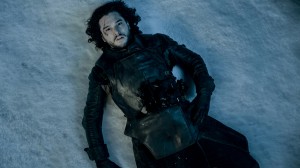 Jon Snow (Kit Harington) begins the episode by being extremely concerned that he’s gotten Brothers of the Night’s Watch killed in the cause of saving Wildling lives. Sam (John Bradley) points out that Jon has, even so, saved a great many lives. Sam expresses his desire to leave the Wall, go to the Citadel and study to be a Maester – the Watch needs one now that Maester Aemon has passed away. Sam also wants to leave right now because he’s afraid if he stays, his love Gilly (Hannah Murray) will be attacked and he’ll die trying unsuccessfully to defend her. Jon gives his blessing for Sam to take Gilly (and her baby) and head to the Citadel, with the understanding that Sam will return to aid Jon. But this is not to be.

Even those who have read all the books are still likely to be shocked by the final scene, with the heroic Jon being lured outside to the Castle Black courtyard with the possibility that his long-missing Uncle Benjen is still alive. Once Jon is there, he is surrounded by his brothers of the Night’s Watch, herded to a wooden sign that says “Traitor” and then almost ritually stabbed again and again by members of the Watch, each man saying, “For the Watch.” The last to stab Jon is his young steward Olly (Brenock O’Connor), who cannot reconcile the fact that Wildlings killed his parents and destroyed his village with Jon’s wish to make peace for the greater good. A similar scene happens in the most recent of the novels, A DANCE WITH DRAGONS, but there Jon’s fate seems less conclusive.

A lot of the deaths on GAME OF THRONES strike the double blow of character loss and seeing the characters die by betrayal. Ned Stark, Robb Stark, Shireen Baratheon and now Jon Snow are not only people we have come to greatly care about, they are people who, at the last, are turned on by those they trust. It is extremely sad, but it’s also true to the way the story is told.

On the meta level, there’s also the matter of what Jon’s death means in the greater scheme of things. Without him as Lord Commander, the Wall and Castle Black are very likely to fall to the White Walkers, who will then come south. The George R.R. Martin book series on which GAME OF THRONES is based is called “A Song of Ice and Fire.” It’s entirely possible that all of this is building to dragons vs. Walkers, though the conclusion is too far off to see from here. The TV series has begun to diverge in some significant ways from the novels. Martin says there will be two more books and series adaptors/show runners David Benioff and D.B. Weiss say there will be two more seasons.

We have been warned every step of the way, by the characters within the show and by the people who create the show, that the world of GAME is horrifically dangerous. When one considers the sheer amount of key characters and the straits they get into, the survival rate is actually fairly high. This is small consolation to those who were thoroughly invested in Jon’s navigation of heroism, politics and an impossible situation. There wasn’t anything quite like it elsewhere on television and ending his story feels a little like a violation of the Endangered Species Act. On the other hand, until the complete picture emerges when the series concludes, it’s impossible to know how this development fits the overall vision.

At the war camp of Stannis Baratheon (Stephen Dillane), Melisandre points to the clearing of the storm as proof of the success of the sacrifice of Stannis’ young daughter Shireen the previous night. However, morning brings news that half of the men have deserted (likely due to the aforesaid sacrifice). Stannis’ wife Selyse (Tara Fitzgerald), Shireen’s mother, is found hanging dead from a tree, having committed suicide. Melisandre slinks out of the camp; Stannis presses his remaining troops forward into battle against the much larger army of House Bolton.

Watching Winterfell, Brienne (Gwendoline Christie) just misses seeing Sansa (Sophie Turner) light a candle in the tower window, signaling a need for help. The reason Brienne doesn’t see that is because her squire Podrick (Daniel Portman) alerts her to the movement of Stannis’ army. By the time Brienne reaches the forest, most of Stannis’ men are dead. Brienne finds the head of House Baratheon sitting wounded against a tree. She explains to Stannis that she was one of his brother Renly’s personal guard. She asks if, as she has always believed, that Stannis murdered Renly with blood magic. Stannis acknowledges that he did. When Brienne asks if he has any last words, Stannis simply says, “Go on. Do your duty.” And Brienne finally gets to avenge her king, which she’s been trying to do for the past four seasons. Dillane, who is a Shakespearean stage actor, brings gravitas to Stannis’ defeated regret and Christie is a study in solemn dignity.

In the confusion at Winterfell with soldiers coming and going, Sansa lights the aforementioned candle. On the battlements, she encounters Theon (Alfie Allen) and Myranda (Charlotte Hope), lover of Sansa’s sadistic husband Ramsay (Iwan Rheon). Myranda has a crossbow and threatens to wound, though not kill, Sansa, saying that Ramsay will want to have heirs by Sansa before he tortures her to death himself. Theon, finally doing something useful, knocks Myranda off the battlements to her death. By mutual agreement, Sansa and Theon take each other’s hands and jump from the wall to the snow outside.

We don’t see them land, but we can surmise they survive the jump. Theon still seems to be getting off rather lightly for his past actions, but it’s understandable Sansa would ally herself with just about anyone to get free of the Boltons.

On the ship heading from King’s Landing to Dorne, Jaime (Nicolaj Coster-Waldau) hesitantly tries to tell his daughter Myrcella (Nell Tiger Free) that she’s really his daughter. Myrcella actually already knows this and is very understanding. Jaime is deeply touched – and then Myrcella begins bleeding from her nose. She has been fatally poisoned by Ellaria Sand (Indira Varma) when Ellaria kissed her – we see Ellaria’s daughters give their mother the antidote and a cloth to blot her lips.

This is a rather strange place to leave this particular story, since Jaime is currently mid-ocean with the Dornish crown prince Trystane, Myrcella’s fiancé. Will Jaime revert back to his old murderous ways and kill the boy, even though Myrcella and Trystane were in love? Will he head back to Dorne? Will he sail on to King’s Landing, into the catastrophe that’s brewing there?

In King’s Landing, Cersei (Lena Headey) finally concedes that the only way she’ll get to see her son King Tommen is by confessing her sins to the High Sparrow (Jonathan Pryce). The High Sparrow accepts Cersei’s confession, though all she admits to is adultery with her cousin Lancel, not incest with Jaime or conspiring to kill King Robert. However, the High Sparrow says there will still be a trial. Cersei may return to the Red Keep if she shows her atonement. This is a literal walk of shame – Cersei, naked and bleeding and having physical filth and verbal abuse flung at her as she walks across the town, is followed by a female cleric who intones, “Shame, shame, shame” with every step. By the time Cersei gets to the castle, she’s on the verge of collapse. Qyburn (Anton Lesser) drapes her in a cape and introduces her to the newest member of the King’s Guard, a hulking figure in armor who seems to be the reanimated Gregor Clegane.

The sequence brings up a lot of mixed emotions. We do feel sympathy for Cersei, at the same time we’re aware that we’ve wanted to throw garbage at the character and see her bleed. Headey gives us a sense of genuine wretchedness and humiliation, but lets us see the fury underneath as well. And with the livid Cersei back at the Red Keep, there’s no telling what kind of havoc will ensue next.

In Braavos, Arya (Maisie Williams) uses one of the faces from the House of Black and White to get into the brothel where Meryn Trant (Ian Beattie) is beating two other young girls. When he strikes Arya, she won’t cry out, so Trant wants to be alone with her. As soon as the other two girls have departed, Arya reveals her own face – and then stabs Trant in both eyes. She continues to stab him as she tells him she is Arya Stark, and he is nothing. After Trant is dead, Arya returns to the House of Black and White, where Jaqen (Tom Wlaschiha) is unhappy that she has killed someone who wasn’t marked for death by the Many-Faced God. At first, it seems as though Jaqen is going to force Arya to drink the lethal water of the fountain. Then he drinks it himself, then is alive again and the corpse on the floor goes through many faces, until the last face it has is Arya’s. While the real Arya is still trying to figure out what all of this means, she is struck blind.

Williams again impresses with her fierce commitment. Arya can probably cope with being blind – the question is, will she ever really be able to give up her identity? The character seems proud of who she is, and no wonder.

In Meereen, it’s decided that Daario (Michiel Huisman) and Jorah (Iain Glen) will search for Daenerys (Emilia Clarke), while Tyrion (Peter Dinklage), who has experience in ruling, and Missandei (Nathalie Emmanuel) and Grey Worm (Jacob Anderson), who have credibility with the citizens, will be in charge of the city. When Tyrion is alone, Varys (Conleth Hill) comes to him, putting his network of spies at Tyrion’s disposal. Dinklage and Hill are, as always, a delightful double act.

Daenerys doesn’t know where Drogon has brought her. She wants to go back to Meereen, but Drogon is napping and having none of it. (Viewers who have seen HOW TO TRAIN YOUR DRAGON may feel that some of the big fellow’s catlike mannerisms seem familiar.) Daenerys wanders down the hill – and finds herself confronted by a horde of Dothraki riders.

It’s unclear if the riders are welcoming Daenerys back or threatening her. Plotwise, it makes a lot more sense if they’re declaring allegiance, as that moves the story forward, whereas if they’re hostile, there’s a scene ahead of Drogon burning some more people and then leaving Daenerys where she was before it happened.

Speaking of things that are unclear, one big quibble with the episode – where is Jon’s direwolf Ghost? This wouldn’t be such a major issue if Ghost hadn’t turned up a few episodes back to rescue Sam and Gilly. If the direwolf could sense danger to Jon’s friend, he ought to be able to sense danger to Jon himself. At the very least, an explanation of Ghost’s whereabouts seems warranted.

Otherwise, “Mother’s Mercy” is as packed and dense an episode of television as can be. It may be more exhausting than enjoyable to watch, but there’s no denying the talent involved from all parties concerned.

Related: TV Review: GAME OF THRONES – Season 5 – “The Dance of the Dragons”