Home » The Woman in Black 2 Angel of Death movie review 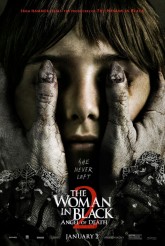 Movie Review: THE WOMAN IN BLACK 2: ANGEL OF DEATH

An uninspired, lazy horror film that doesn’t live up to the highs of the 2012 original 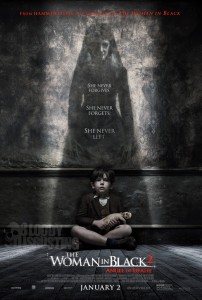 One of the better haunted house films in the last ten years was 2012’s THE WOMAN IN BLACK – an eerie period film that was produced by the newly rejuvenated British film company Hammer.

Harry Potter himself, Daniel Radcliffe, starred in that film which was a great, old school British horror movie with just the right amount of scares and a truly great film ghost with “the woman in black.” Even though the ending squandered some of the magic of the first part of the film, it still didn’t take away what a great ride it was.

Now comes the inevitable (and rather pointless) sequel THE WOMAN IN BLACK 2: ANGEL OF DEATH set 40 years after the original film. It’s the middle of World War II and a group of  school children are sent to the countryside with teacher Eve (Phoebe Fox) and headmistress Jean (Helen McCrory). The only place that is safe, or so they think is the Eel Marsh House which is still haunted by the child hungry Woman in Black (Leanne Best). I guess during war, even ghosts are more tolerable than being bombed.

Of course, things go awry rather quickly as the Woman in Black takes a shine to kid Edward (Oaklee Pendergast) who recently lost his parents when their house was bombed during the Blitz. She protects him and hurts other children that taunt him, but she has other plans for her. Trying to save Edward is Eve, who has demons of her own – which the Woman in Black plays with as well through mind tricks and nightmares. Things meander along in a very an unsatisfying way until Eve has to battle the supernatural to save herself and Edward.

Whereas the original film was a mystery where we uncover who is haunting the Eel Marsh House and why, the second film is more conventional spook house. We know the threat, the question is how the threat will get its way.

Director Tom Harper conjures up two or three beautiful images throughout the duration of the movie and occasionally presents a great scare or two, but most of the movie uses  cheap jump scares and loud sound effects in place of genuine suspense. While Fox is more than game as Eve, her character too is a bit one-dimensional. Fox tries so hard to give dimension to her thinly drawn character. It’s a rather lost opportunity to really bring you deeper into the film when the script has written her character so poorly.

Strangely, Harper has all the ingredients to create a great film. The World War II setting makes the movie unique and there’s a logical reasoning of why a group of kids would end up at the house – but nothing really gels fully. The movie meanders from with one set piece to another, but no edge of your seat moments. Just a few of them could have made this movie stand out or at least make it on par with the original film.

THE WOMAN IN BLACK 2 is certainly better than some of the found footage PARANORMAL ACTIVITY films, but in some ways it falls prey to the same limitations those movies have as well – all set up, no pay-off. A movie doesn’t have to be wall to wall scares to be effective, but it also has to have heart and characters you genuinely care for, and that’s sorely missing here.

At least Hammer has one thing right with the franchise – by setting THE WOMAN IN BLACK films the past and different timelines, it opens up the possibilities for different and original scenarios. Too bad this movie is a disappointing misfire. Better luck haunting next time.