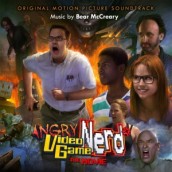 SHIELD's Bear McCreary geeks out with an 8-Bit epic score

Film scores are going through an 8-bit revolution with the likes of Nigel Gordich’s SCOTT PILGRIM VS. THE WORLD and Henry Jackman’s WRECK-IT RALPH. But arguably non of these retro scores have the insane fanboy enthusiasm that Bear McCreary beings to a two-hour feature version of a game geek blog done good. Done with the same, blasting out of your parents’ basement energy of his epic metal-orchestral score for the RPG’er’s versus real monster score to KNIGHTS OF BADASSDOM, McCreary plays this unlikely hero’s odyssey of uncovering the equally deadly E.T. game from an Arizona landfill with the same level of gleefully bombastic commitment. Indeed, no one has every played the 80s Atari synth sound to such dead-on extremes, with a wonderfully cheesy electronic vibe so accurate that one can only imagine the corpses of the Super Nintendo consoles that McCreary ripped apart to get this sound. But McCreary’s not so nerdy that he can’t go beyond a one-note approach of bowing down to Donkey Kong, as he score gets in nods to spaghetti westerns and crazed military action as the ANGRY quest takes on terrifying cosmic dimensions.

Bringing all of the thematic attention that McCreary gives to his scoring for the far more respectable likes of SHIELD and OUTLANDER, NERD goes for gonzo broke because it hears this ridiculousness for real, especially during the ten minutes of “The Nerdy Hero,” which plays like a knockout battle of the bands between a raging metal orchestra and the speedy synth rhythms of Sonic the Hedgehog. That this score’s satiric, broad-hearted cheesiness could work just as well over a Michael Dudikoff ninja Cannon picture, circa 1985, as much as it does at convincing us that that this has the melodic balls of a real movie score, says much about the sweat-dripping enthusiasm that continues to make McCreary one of Hollywood’s busiest fanboys. More than ever, he’s got the thematic stuff to back up a wonderfully berserk and inventive score, complete with swear-filled song that Wayne and Garth might have rocked out with on a particularly pissed off day. “E.T the Game Score” AGVN is most definitely not.