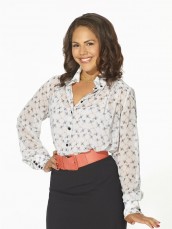 Lenora Crichlow aids love with A TO Z – Exclusive Interview

The actress also reveals a difference between U.K. and U.S. law 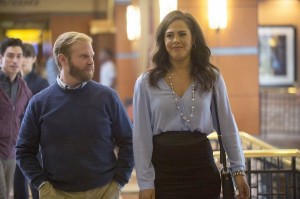 In NBC’s Thursday-night half-hour comedy A TO Z, we see everything about the courtship of Adam (Ben Feldman) and Zelda (Cristin Milloti), who date each other for eight months, three weeks, five days and one hour.

Lenora Crichlow plays Zelda’s best friend Stephie, a lawyer who has a lot of insecurities about her own romantic life. Crichlow, originally from London, England, became known to American audiences on BBC America’s airings of the original British BEING HUMAN as the self-sacrificing ghost Annie, who’s in love with a relapsing vampire. More recently, she costarred in ABC’s comedy BACK IN THE GAME as wealthy alcoholic/loving mother Gigi.

ASSIGNMENT X: There seem to be some similarities between A TO Z’s Stephie and BACK IN THE GAME’s Gigi – they’re both simultaneously very encouraging to their friends but very self-involved.

LENORA CRICHLOW: Yeah, it seems to be a theme. I’m very encouraging in real life, but not that self-involved. But [Stephie] is fun to play. Obviously, I don’t know where they’re going to take Stephie. But I think she does love Zelda very much, so I’m sure she will be there for her and the ups and downs of her relationship with Andrew.

AX: Might Stephie make use of the online dating company that Andrew works for?

CRICHLOW: I think so. Well, they’ve promised me that she does date a lot, and that she does find love – well, she always tries, at least. A for effort for Stephie. At least she’s going to have fun practicing.

AX: Can you talk about the differences of playing an American in a half-hour network comedy and doing a British supernatural drama like being?

CRICHLOW: It’s very different on lots of levels. Culturally, the States is very different to where I’m from. But essentially the work and my approach to the work on the characters is all kind of the same. But each job even within the U.K. is quite different, to be honest. Each set has a tone and each cast has a different vibe and chemistry and themes and topics that come up. So every job you do as an actor, you have to adjust to each thing. But it’s so fun, doing a comedy – nothing too painful, nothing too agonizing. It’s a lot about loosening up, actually. That’s probably the hardest thing, is to loosen up.

AX: It’s unlikely on A TO Z, you’re going to have to say something like, “Zelda, you ate a train full of people!”

CRICHLOW: Yes, I don’t think I’m going to be crying about how many people she’s killed in an episode, which is a relief, because there’s only so much crying a girl can do about dead bodies.

AX: Do you find the broadcast standards issues, as far as what can and can’t be said and shown, are very different between the U.K. and the U.S.?

CRICHLOW: Well, the stuff I’ve done back home in the U.K. has all been pretty mainstream as well, so we always have to be quite sensitive – BEING HUMAN, you wouldn’t think it, but we were actually quite sensitive [laughs]. [Network comedies on] ABC, NBC, they’re major networks – you do have to be very careful, I think.

CRICHLOW: I think on this show, the most fun will be working with Cristin, because we get on so great. And I know from doing [other series] that when you have guest characters, it’s exciting and nerve-wracking, but there’s nothing quite like the main cast, those scenes, because you have a relationship and a history and a chemistry that’s easy. And all the guest characters that come in are much more exciting, but I think it’s like going home and playing with your mates that you’ve known from way back when you’re on a show, it’s like a little microcosm of a world. So I think it will be fun.

AX: Did they do a chemistry read for you with Cristin Milloti?

CRICHLOW: Do you know what? They did. Cristin was in my audition, which she watched, and then I tested. It was all very quick for me. I think I first auditioned on the weekend, and I was tested by Monday and I was cast by Thursday.

AX: Now, can you talk about the differences between Stephie and Gigi?

CRICHLOW: Well, Gigi was a mother, and was very, very wealthy and very tipsy all the time. Stephie is not as established in her life. She’s still trying to find love and she hasn’t got a child. She’s a career woman, she has a career as a lawyer and she’s much more organically enthusiastic about life. I’d say Gigi’s enthusiasm about life comes slightly out of the bottle.

AX: Have you studied anything about the law to help with playing a lawyer?

CRICHLOW: I’ve got a couple of friends who I’ve taken tidbits from, but I’m going to do a bit more homework, for sure.

AX: Have you found anything out that’s interesting, or you’re like, “You know, you could write this into an episode for me”?

CRICHLOW: Well, there are differences between U.K. law and American law. You can’t buy the life rights to someone’s story in the U.K., but you can in America – fun fact. I did not know that. I’ll let them know; I’ll see if we can get that in.

AX: And do you have any other projects we should know about?

CRICHLOW: At the moment, in front of camera, this is the main thing. I would like to move into behind the camera stuff, but I’m very early stages of working on that side of things. But I’m very lucky to be working at all, so I get to soak it all up when I’m working as an actress. I get to see what everyone does and how they work.

AX: Is there anything else you’d like to say about A TO Z right now?