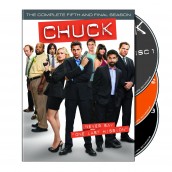 Thirteen episodes wasn’t enough to wrap up one of the funniest and most creative spy shows since GET SMART, but it will do

If NBC didn’t have the kind of executive and management woes it’s had over the last five years, perennial bubble series CHUCK would have not made it past its second season, let alone reached five seasons total.

Yet, amid all of NBC’s internal turmoil, there was a solid fan base for CHUCK that fought for it to the end – including letter writing campaigns and sponsorship saviors like Subway.

The other secret – CHUCK was damn good. It was a funny, smart and clever spy thriller that mixed genres and tones successfully week in and out while also featuring a great, tight ensemble of actors. It felt like a family and since the fans were instrumental in saving the family, there was a bond between the two that is rare in network television.

CHUCK’s life began when mild-mannered Buy More employee Chuck Bartowski (Zachary Levi) found the “Intersect” uploaded to his brain which turned him into a super-computer of sorts and an asset to the U.S. government who sent handlers Sarah Walker (Yvonne Strahovski) and Casey (Adam Baldwin) to watch over him.

Over the course of four seasons, Chuck came into his own – from bungling everyman to an actual spy – forming a solid team with Sarah and Casey while also falling in love and marrying Sarah. His friends and family were soon drawn into his world during Season 4 and as Season 5 begins a whole new adventure begins with Chuck, now Intersect-less, trying to run his own spy business.

His best friend Morgan (Joshua Gomez) accidentally downloaded the Intersect during the Season 4 finale, and the first half of the season deals with how it’s messing with his brain and turning him into an egotistical maniac.

While this subplot does prove frustrating during the early part of Season 5, it’s when the Big Bad starts to rear its ugly head do we understand how all five seasons tie in together – and how Chuck has been used as a pawn every step of the way.

The last handful of the episodes deals with something that can either be viewed as brilliant or blasphemy – pending on which camp you fall into. It revolves around Sarah losing all of her memories of Chuck due to a mind wipe and Chuck finding a way back into her heart.

The end result, at least for me, is one of the most haunting finales of any TV show in some time. There is hope, and a new beginning – and that last episode “Chuck Vs. The Goodbye” is filled with echoes to the first episode that will please die-hard fans even if Sarah, isn’t, well, Sarah anymore.

Yes, CHUCK couldn’t get away without playing the bittersweet card, but it’s these big, sweeping chances that kept CHUCK fresh and exciting. There was always constant ecolution. Each season, Chuck and the team changed for the better and moved the story forward instead of basking in the same old storylines.

There was also the Buy More antics spearheaded by Jeff (Scott Krinsky) and Lester (Vic Sahay). Even Jeff transformed from a space cadet to an actual smart cookie when the root of his quasi-brain damage was finally discovered. This provided some interesting detective work on Jeff and Lester and they too were brought into the spy game too.

The actors were perfect for the roles and they stayed true to themselves throughout. Levi was pitch-perfect as Chuck and really grew into the role while Strahovski brought vulnerability and toughness to Sarah. Baldwin was the unsung hero of the ensemble in his unwavering attempt to stay the same, while deep inside his heart was melting. Watch the Russian bear hug moment in the finale and I defy anyone not to choke up.

Over three hours of special features are included in this set and it’s another bonus for long time fans. The gag reel is lengthy as usual and shows how much fun the cast has making these shows.

There’s a special feature on how the fans saved the show, a look at the behind-the-scenes filming the final episode, the music behind CHUCK, a look back at the series and the amusing featurette of the actors crying during the filming of the finale

There is also discussion on the future of CHUCK (no big revelations here) and commentaries on the final two episodes.

The other bonus is the extended cut of the series finale. While I was hoping for a little more meat (more deleted scenes, revelations), it’s really just extensions to scenes that were already there. It gives a more complete sense to the series finale, but deep down, you almost wanted an additional coda or something to get you excited for where CHUCK could and show go if there’s a direct-to-DVD or feature film life left to it.

CHUCK is one of the series that probably should have been a bigger hit than it actually was. Yes, it had its ardent fans, but it also was a diamond in the rough on NBC where it performed in spite of the network woes. It was family friendly at times, funny and always clever. There hasn’t been a spy show quite like this since GET SMART and there probably won’t be one for a long time.

CHUCK mixed so many different styles and storylines together, that it was a pop culture geek’s dream. To have five stellar years with the show was a blessing. Now the real test of time is how many new converts will discover the show now that it’s off the air. I guess that’s the next mission for the fans – get new fans through the DVDs and then start building a case for the next incarnation of CHUCK whether it be direct-to-DVD movies of a feature film.

How many Subway sandwiches will we have to eat to make that happen? Time to get started.

Tags: Adam Baldwin, Blu-ray, Bonita Friedericy, Cat Squad, Chuck, Chuck: The Complete Season 4, Craig Kilborn, DVD, John Larroquette, Joshua Gomez, Lauren Cohan, Linda Hamilton, Mark Christopher Lawrence, Mark Hamill, Mircea Monroe, NBC, Ryan McPartlin, Sarah Lancaster, Scott Krinsky, Season 5, The Complete Season 4, The Fifth and Final Season, Vic Sahay, Vs The Curse, Vs. Agent X, Vs. Bo, Vs. Sarah, Vs. The A-Team, Vs. The Baby, Vs. The Bearded Bandit, Vs. The Bullet Train, Vs. The Business Trip, Vs. The Cat Squad, Vs. The Cliffhanger, Vs. The Family Volkoff, Vs. The First Bank of Evil, Vs. The Frosted Tips, Vs. The Goodbye, Vs. The Hack Off, Vs. The Kept Man, Vs. The Last Details, Vs. The Muuurder, Vs. The Santa Suit, Vs. The Seduction Impossible, Vs. The Wedding Planner, Vs. The Zoom, Yvonne Strahovski, Zachary Levi, season finale, series finale, spies, spy