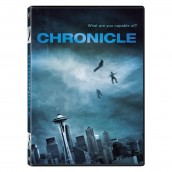 A surprisingly well-made found footage take on the superhero genre

One of the more refreshingly original found footage movies to come out this year is CHRONICLE, which just hit DVD and Blu-ray.

It’s a superhero/super villain origin story told through the perspective of an introspective teen named Andrew (Dane DeHaan) whose only way of communicating seems to be through his video camera. He has a cousin Matt (Alex Russell) who tolerates him and is an acquaintance of high school jock Steve (Michael B. Jordan).

One night, during a big party, the three of them come across a huge hole in the ground where there appears to be some sort of alien ship of some kind underneath.

When they approach it, some weird stuff happens and they wake up, unsure of what happened.

Of course, this interaction has changed them considerably as they learn they have super powers. They can levitate objects,  can fly and ultimately,  can destroy an entire city.

CHRONICLE takes the typical superhero concerns and bottles them up into a fun, little package. Director Josh Trank and Matt Landis (who wrote the script based on a story he and Trank conceived) provide some original fun and even if the message gets a little bit murky, the delivery is pretty dark and cool.

I will say, the film tends to lose its way toward the end – resulting in some over-the-top special effects nonsense that, while fun, does tend to veer into overkill.

The Blu-ray release offers up a director’s cut with around five additional minutes full of footage, and the bonus features are pretty unventful for both – a deleted scene, a short making of, a pre-viz segment and a camera test with different actors doing the diner scene.

CHRONICLE made a bundle at the boxoffice because it struck a cord and appealed to teens still attracted to the whole found footage genre. The movie also leaves things open for a CHRONICLE II, which is apparently in development. CHRONICLE isn’t the greatest, but it’s highly original and tries to do something different which is more than can be said for mega-budget misfires this year like JOHN CARTER and BATTLESHIP.