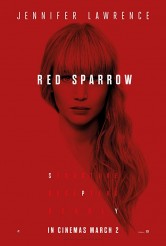 James Bond never had to deal with this kind of abuse

RED SPARROW is a retro spy thriller set in the present day. The retro aspect creates a lot of problems for the drama based on Justin Matthews’s award-winning 2013 novel, the biggest one being the spectacularly awkward timing of the film’s release. Of all the moments in history to tell a straight-faced story about Russia being keen to get its national hands on U.S. secrets, this seems like one of the worst.

Be that as it may, RED SPARROW introduces us to Russian ballerina Dominika Egorova (Jennifer Lawrence) and CIA agent Nathaniel Nash (Joel Edgerton), both of whom have separate awful incidents on the same night. Three months later, Dominika’s dancing career is over, and Nate is struggling to convince his bosses to send him back to Russia to resume contact with their covert operative within the Russian spy agency.

Dominika’s uncle Vanya Egorov (Matthias Schoenaerts) is a high-level operative within the Russian security services. Vanya promises Dominika that her ailing mother (Joely Richardson) will be looked after if Dominika will agree to do something for the agency. The situation is not what Dominika expects – and not really what most audiences will be expecting either.

Spoiler alert/trigger warning: Dominika gets raped by a Russian spy agency target. Something happens to prevent the completion of the act, but it’s well underway by then. Director Francis Lawrence and screenwriter Justin Haythe either misunderstand the dramatic stakes they are setting here, or believe that what follows somehow justifies this set-up. This isn’t to say no story can ever include rape as a plot element, but here it feels like it’s meant less as a motivating factor in Dominika’s comprehension of the world she’s being pulled into (especially given the way actress Lawrence is shot in subsequent scenes) and more as a glib plot device. Things would work out exactly the same if the scene played out as it does minus the actual rape.

Dominika subsequently goes through some sexualized, quasi-rape-y spy training before being sent on an actual mission, which for many will put the squick factor over the top. Here again, RED SPARROW suffers from poor timing. Most female viewers in 2018 are not likely to feel either entertained or educated by seeing a fictional woman sexually humiliated, even if she is able to turn the tables occasionally. In a drama where this would be the whole point, it would be a different matter, but here it’s presented as the equivalent of Navy SEAL training, and, well, it isn’t.

From there, RED SPARROW becomes a well-paced if not entirely engaging tale of international espionage, with the requisite number of plot twists. The action is solid and director Lawrence makes notably good use of color throughout.

Certainly, everything is driven by Dominika, but the filmmakers want to have it multiple ways. We’re supposed to care about her and fear for her, which actress Lawrence invites with her charisma, intensity and sincerity. At the same time, we’re not meant to trust her, but since it’s also difficult to get very worked up about whether the East or the West succeeds here, this doesn’t have the urgency that it should.

The novel RED SPARROW was lauded for its realistic and detailed portrayal of espionage. The details in the film RED SPARROW may or may not be realistic, but they are not presented in a convincing way. The upshot is that it increases a desire to read the book and to watch episodes of HOMELAND or BERLIN STATION, but not to recommend a movie that is handsome but often tone-deaf.