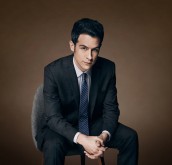 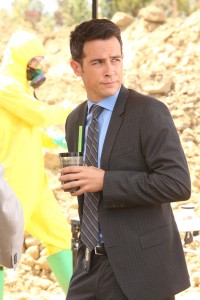 ASSIGNMENT X: So are you happy to be with BONES in its last season, or do you feel like, “Man, it’s been on for twelve years and I got here relatively late?”

JOHN BOYD: Well, if I really stretch it a little bit, I can tell myself I was there for a quarter of BONES, two-and-a-half seasons. Yeah, I’m so happy to be here, and I wish it would go on forever and ever, but we’ve got a really great final twelve coming, and it’s been really great to start them.

AX: How do you feel about Aubrey’s arc this season? Do you think he still feels guilt about the fact that Dr. Hodgins, played by TJ Thyne, was paraplegic after an explosion that tangentially was meant for Aubrey?

AX: How did you feel about the storyline with Aubrey’s father turning out to be a major criminal?

BOYD: Well, it was a big bomb they dropped at the end of that episode when Karen Delfs [played by Sara Rue] gives Aubrey this file that shows that his dad has been sending a p.i. around following him, and then we never heard anything else about it. So I really hope that we have time to explore that, and that gets involved in the last twelve here, but I don’t know.

BOYD: Oh, yeah. That was a fun thing to play, that whole storyline of working up the courage to kiss her, and Aubrey’s stuff with Booth [asking for relationship advice]. That was really fun to do.

AX: Aubrey and Jessica have a hard time physically coordinating their first kiss. Did you have to choreograph those near-misses like you’d choreograph a fight scene?

BOYD: Yeah, it’s one of those things that we work out awkwardly, like, “I’ll try this, and you try this, and we’ll see what happens.” But Laura is great to work with.

AX: Can you tease anything about Season 12?

AX: Hopefully not the kids.

BOYD: No, I don’t think they’d do that. Emily just made her directorial debut in the Season 12 opener.

AX: How is she as a director?

BOYD: We’d cut, and then Emily would come over and have a chat with you about your character in the scene, and really took her time with us. It was really, really fun.

BOYD: I got to do a little thing on this Todd Haynes movie called WANDERLUST, which is really fun. I got to go to New York and meet Todd and work with him and some people from that, but other than that, I’m just doing these last [BONES episodes]. So I’m thinking about those.

AX: And what would you most like people to know about BONES Season 12?

BOYD: Just that BONES is as good as it’s ever been. David and Emily are just so incredible and fresh and it just blows my mind every time I work with them. They find something amazing in the scene and bring something fresh to it.

This interview was conducted at Fox Network’s party for the Television Critics Association press tour.