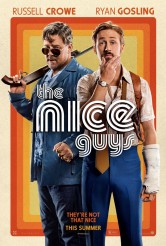 A little like CHINATOWN, reimagined as a ‘70s action buddy comedy 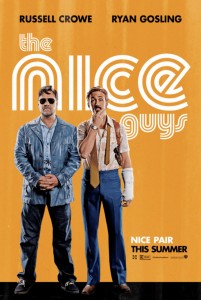 At first, a comparison between the new release THE NICE GUYS and the 1974 classic CHINATOWN may seem incongruous. The older film, after all, is an Oscar-winning drama, while THE NICE GUYS is solidly within the tradition of its director/co-writer Shane Black’s trademark action/buddy comedies. But hang on – both are period pieces (CHINATOWN is set in 1937, GUYS in 1977), both are quintessential views of Los Angeles, both wind up dealing with matters close to the city’s history and both have mysteries that are entwined with facts that touch on contemporary social issues at their hearts. In CHINATOWN, it was water rights. In THE NICE GUYS, well, that would be telling.

Black and his co-screenwriter Anthony Bagarozzi concoct a pretty good pay-off as to what’s happening and why, true to the Seventies era and yet perfectly resonant today. As a director, Black stages some impressive action sequences, interspersed with moments of eye-widening brutality that remind us we are meant to take some of this seriously. However, his real passion here seems to be in the visual jokes. There’s an entirely non-scatological scene with Gosling’s March trying to exit a bathroom stall that’s a bit of physical comedy that we’ll remember fondly long after the film ends, and good mileage is obtained from March’s klutziness all round.

Gosling is game and often hilarious as the only mildly moral, occasionally shrewd sadsack gumshoe March. Crowe has perfectly droll reactions and fine deadpan delivery, and is unsurprisingly convincing in moments when Healy doles out effective violence. Rice is charming and engaging as the resourceful Holly, and Yaya DaCosta goes from sweet warmth to Pam Grier tough with verve. For film buffs, THE NICE GUYS also marks a screen reunion between Crowe and Kim Basinger, their first since L.A. CONFIDENTIAL, another movie that this one evokes with a wink.

Some of the verbal gags don’t quite work – there’s a running grammar correction that loses traction as it goes – and making young Holly a heroine doesn’t quite compensate for the sexism (era-movie-appropriate as it may be) elsewhere. Also, editing in some action sequences, especially the climax, sometimes adds a little more mystery of the who-just-did-what-to-whom variety than is desirable.

However, there’s no arguing with the pitch-perfect imagery of smog-swathed L.A. in the Seventies, nor with the shaggy-dog-seeming but actually well-structured storytelling. Also, THE NICE GUYS earns a lot of laughs, which is always, well, nice.